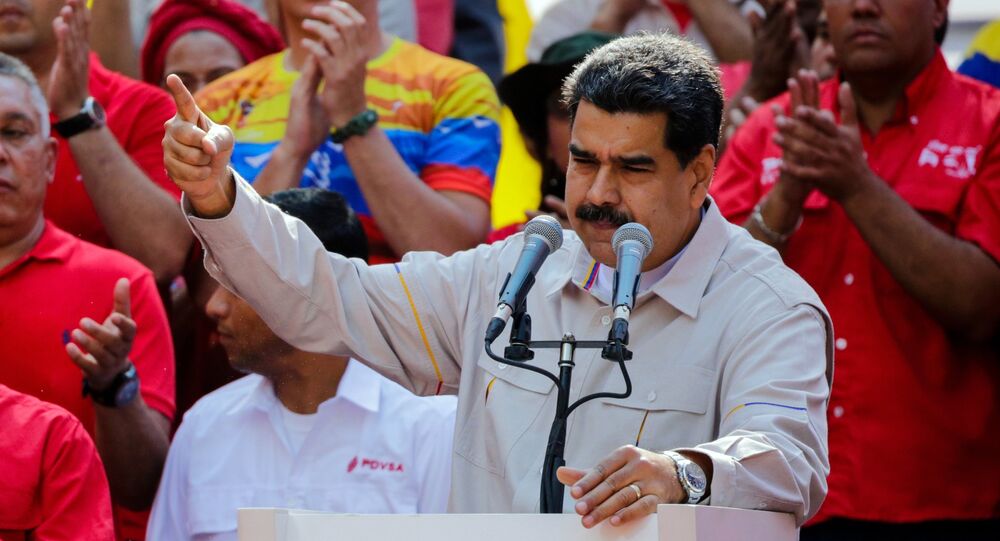 Earlier, Vice President Pence announced that the US Treasury had lifted all sanctions against a former Venezuelan intelligence service chief who broke ranks with Venezuelan President Nicolas Maduro last week and voiced his support for opposition leader Juan Guaido.

Venezuelan President Nicolas Maduro has blasted the Trump administration and Vice President Mike Pence personally over their alleged attempts to bribe the Venezuelan military into siding with the coup plotters.

"Yesterday, Mike Pence declared that the soldier who betrays the homeland and switches to the side of the gringos –that they will reward him. [This is] a lack of respect for honour, morals, and the dignity of the Bolivarian Armed Forces," Maduro said, speaking in the state of Aragua, northern Venezuela.

Maduro stressed that Pence had no authority to advise the Venezuelan military in any way.

"This is an imperialist colonialist view of things. They think that having given the orders, Venezuela's military will just say 'understood Mr. Pence.' No! Mike Pence, the constitutional, legitimate commander in chief of the Bolivarian National Armed Forces is here before you and his name is Nicolas Maduro Moros," Maduro said.

© REUTERS / Palacio de Miraflores
Maduro Expels Dozens of Officers From Venezuela Army After Failed Coup - Reports
The Venezuelan president warned that his country was well defended, with 2.3 million militia members being trained to "defend every inch of the nation's territory" if need be. Maduro stressed that Venezuela is equipped with modern weapons systems, with the military prepared to wage a defensive war based on "a new structure, a new strategic concept" across every province.

Earlier this week, Pence confirmed that Washington had removed all sanctions against General Manuel Cristopher Figuera, Venezuela's former intelligence chief, and said the US hoped that the action would "encourage others to follow" suit.

On Tuesday, in the wake of last week's violence, Venezuela's constituent assembly stripped seven lawmakers of parliamentary immunity over their alleged support for the failed coup attempt against President Maduro.

The Venezuelan crisis entered a new phase last Tuesday, when Venezuelan opposition leader and self-proclaimed 'interim president' Juan Guaido called on the military to join the opposition and take to the streets to help depose the government. The coup attempt turned violent, with some 240 people, including protesters and security force personnel, suffering injuries, according to the UN. On Sunday, Venezuelan Foreign Minister Jorge Arreaza said the US-backed effort to oust Maduro had "failed completely."