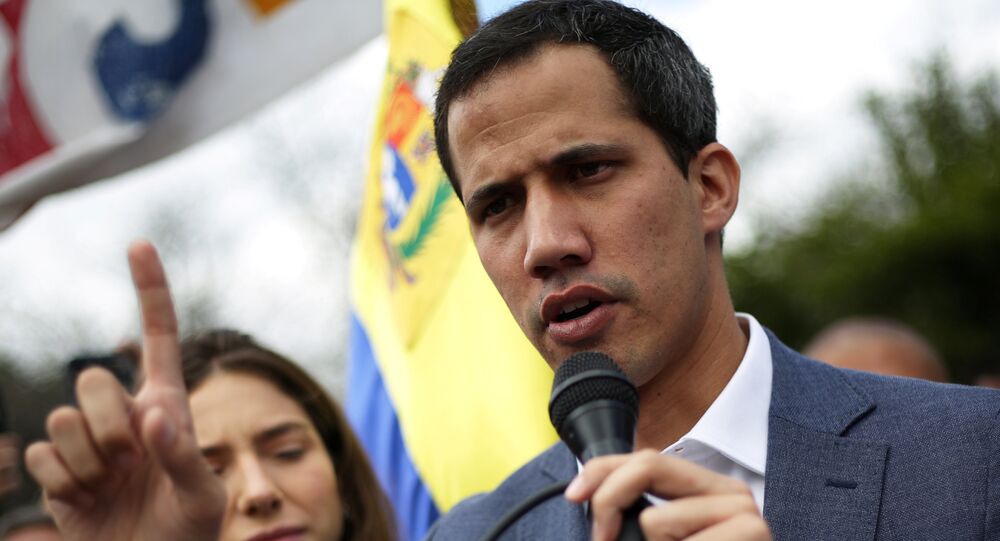 WASHINGTON (Sputnik) - Venezuela's self-proclaimed interim president Juan Guaido in an opinion article published by The New York Times on Wednesday said that the country's opposition has held secret talks with members of Venezuela’s security forces and offered them amnesty in exchange for abandoning President Nicolas Maduro.

"The transition will require support from key military contingents. We have had clandestine meetings with members of the armed forces and the security forces. We have offered amnesty to all those who are found not guilty of crimes against humanity", Guaido said. "The military’s withdrawal of support from Mr. Maduro is crucial to enabling a change in government, and the majority of those in service agree that the country’s recent travails are untenable".

Last week, Guaido declared himself interim president of Venezuela with US encouragement. He was instantly recognized by Washington and several US allies. Russia, China, among other countries, continue to recognize Maduro as the country’s legitimate elected president. Venezuelan President Nicolas Maduro accused Washington of launching a coup in the country.

READ MORE: US Should Not Engage Militarily in Venezuela — Ex-SOUTHCOM Commander Stavridis

However, Venezuela’s opposition does not support the military option to solve the country’spolitical crisis, self-declared interim president Juan Guaido’s representative to the Organization of American States (OAS), Gustavo Tarre, told Sputnik on Wednesday.

© REUTERS / Manaure Quintero
Uruguay, Mexico Convene Intl Conference on Venezuela Crisis - Uruguay FM
"No", Tarre said on Wednesday when asked whether he would support a US military option. "The problem is going to be solved by Venezuelans".

The opposition has been also in contact with Venezuelan diplomats in the United States who no longer recognize Nicolas Maduro as the country’s head of state, Gustavo Tarre told Sputnik.

© CC0
Guaido's Envoy Vecchio Asks US Congress Support to End Maduro's Power
US National Security Bolton in a Twitter post on Monday said the United States would take action if Venezuelan President Nicolas Maduro’s government harmed Guaido or US diplomatic staff. During a press briefing, Bolton also said that "all options are on the table", with respect to addressing the crisis.

The Colombian Defense Ministry, however, told Sputnik that the country's government did not plan to provide the United States with military bases to invade Venezuela.

The United States also announced this week that it has seized billions in Venezuelan oil assets. On Monday, US Treasury Secretary Stephen Mnuchin said sanctions relief was possible if Maduro stepped down.

Guaido's Representative to OAS Says Trump-Guaido Meeting Not Being Prepared