Is Time Running Out For Ortega? Many Nicaraguans Angry With Sandinista Hero

Nicaragua's veteran President Daniel Ortega has ordered an independent inquiry into the killings of dozens of anti-government demonstrators after the Catholic Church called for dialogue. Critics say the 72-year-old Sandinista leader is out of touch with the suffering of the Nicaraguan people.

More than 50 people are believed to have been killed last month when violent clashes broke out on the streets of the capital, Managua, in protest at new social welfare reforms.

The demonstrators were furious at legislation which increases social security contributions on the part of employers and employees, and lowers overall benefits, especially pensions, at the same time.

On April 23, President Ortega said his government had decided to repeal the social security reform which had triggered the mass demonstrations.

But the protests have continued and two more people were killed in clashes on Saturday, May 12.

Pension Reforms Tip Of The Iceberg

The pension reforms appear to have been the touchpaper which lit the embers of underlying resentment against President Ortega and his First Lady, Rosario Murillo, who are both believed to have amassed considerable wealth while the country remains fairly impoverished.

Ortega is a political survivor who has come through new numerous crises.

In the 1970s he was one of the leaders of the Sandinista rebel movement — the FSLN — which eventually ousted the US-backed dictator Anastasio Somoza.

The Sandinistas' victory — which was wildly popular in a country which had been run for the profit of the Somoza family, its cronies and a handful of US companies — did not go down well in Washington.

William, a Nicaraguan who now lives in Miami and runs the Asisomosnicaragua Instagram account, said the protests continued because of the killing of "innocent people", including journalist Angel Gahona who was shot while filming a Facebook Live.

"The people got fed up with the oppression and police abuse towards innocent people. This is a lot of disagreement, pain and anger that the Nicaraguan people have been holding back since the 1980s when the Sandinistas were involuntarily recruiting teenagers for the military and starving people with their communist system. I believe that one thing led to another and after the police killed the first protester, that was the point of no return for the community," William told Sputnik.

"Nicaraguans do want Ortega and Murillo to step down and move away from government, including all their tentacles which are entwined in the whole system," William told Sputnik.

The Sandinistas came to power in 1979 but when, in 1981, Republican President Ronald Reagan arrived in the White House he decided to launch a counter-revolutionary army, the Contras.

Throughout the 1980s Ortega and the Sandinistas battled the US-supplied Contras and eventually defeated them but in 1990 the exhausted Nicaraguan electorate voted them out and replaced him with Violetta Chamorro, a centrist figure who was more pro-business.

Ortega bided his time in the 1990s and, as the Soviet Union and its allies collapsed, he slowly changed the Sandinistas' political outlook. Although they remained a left-wing party, they gradually begin to move closer to the Catholic Church and other evangelical Christian groups which were growing throughout Nicaragua. 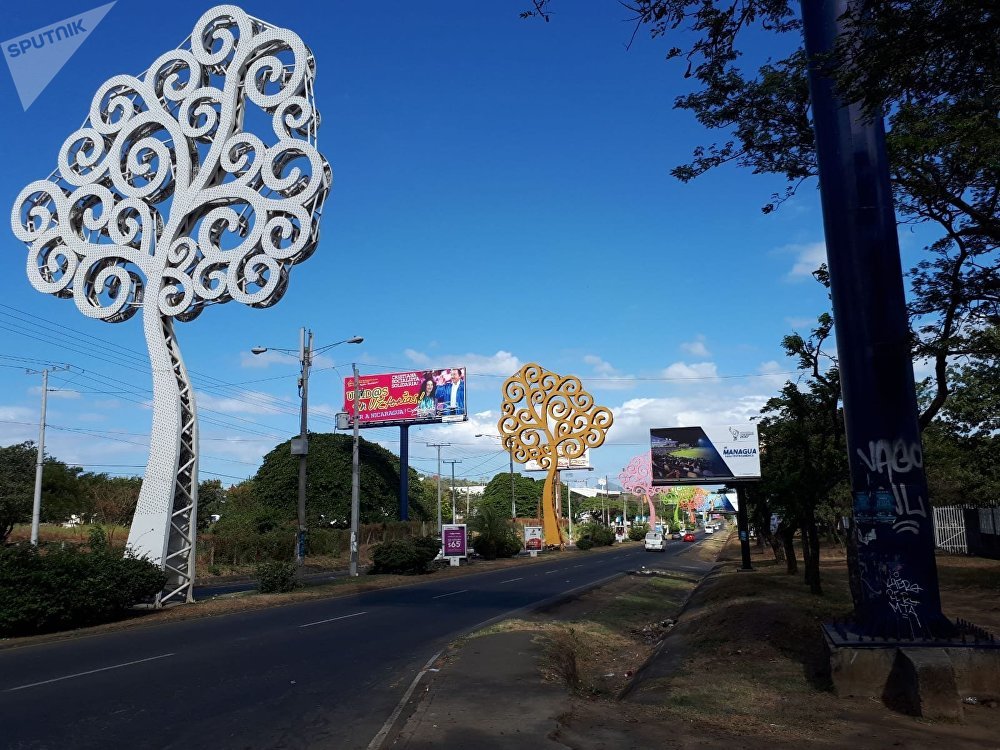 In 2007 Ortega and the FSLN won the presidential election and he was re-elected in 2011.

Eduardo Montealegre, the leader of the main opposition party, a few months before the presidential election.

Ortega was re-elected and this time his wife, Rosario Murillo, was his Vice-President.

Opponents believe he is grooming the 66-year-old to be his successor and she remains a deeply divisive figure.

Tellingly when the protests broke out on April 17 the crowd targeted the huge "Trees of Life" which line some of Managua's main boulevards.

The brightly-colored steel trees are lighted at night by thousands of tiny bulbs.

They were erected on the initiative of Vice President Murrillo, who is nicknamed Chayo.

But many Nicaraguans, suffering from a stagnant economy, believe the "Chayo poles" were a waste of money and eight were set on fire or pulled down during the clashes.

The La Prensa newspaper said each "tree" cost US$25,000 and they cost more than US$1 million every year in electricity.