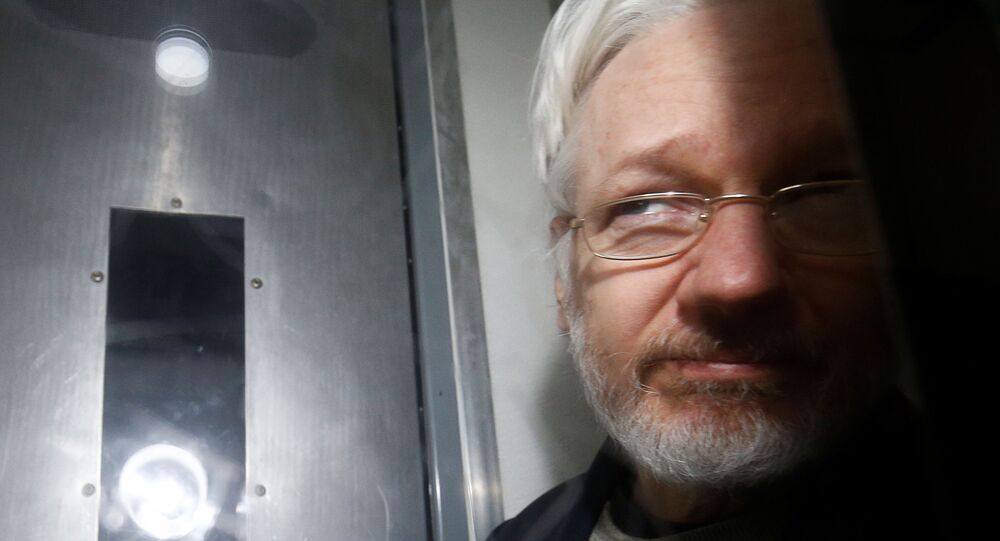 The father of Julian Assange, John Shipton, said in an interview with Sputnik that he would like people to understand his son’s “courage and integrity” in providing information on what governments do, so that ordinary citizens can make their own judgments based on raw facts.

John Shipton, an anti-war activist, has made dozens of trips from Australia to the UK in recent years, while his son, a co-founder of Wikileaks, is fighting against extradition to the US, where he was indicted on 17 charges related to the Espionage Act.

Sputnik accompanied Shipton on the train ride from London Bridge to southeast London, where the high-security Belmarsh prison is located, to see his son for the first time in eight weeks, speaking to him about what it's like to be the father of an award-winning publisher facing up to 175 years imprisonment in the United States.

Sputnik: When did you get back from Australia?

John Shipton: Just two days ago. We arrived the day before yesterday and the next day we went to Strasburg for a committee meeting in the European Parliament, and we caught the train back to see you today.

Sputnik: How many times did you make this trip back and forth between Australia and the UK?

Sputnik: We are on our way right now to Belmarsh prison; you’re scheduled to meet your son. When was the last time you saw Julian?

John Shipton: About 8 weeks passed now; the last time I was in the UK, I saw Julian and then caught a plane to Australia.

John Shipton: Pretty dire. [United Nations Special Rapporteur on Torture and other Cruel, Inhuman or Degrading Treatment or Punishment Nils] Melzer’s and the doctors’ - the 160 doctors, - analysis or diagnosis is pretty sharp.

© Photo : Simon Diaz-Cuffin
Mohamed Elmaazi and John Shipton speak on a train to Plumstead on 28 Jan 2020

Sputnik: And what did you speak about last time you saw him?

John Shipton: Generally, over the last 10 years, we’ve both developed a liking for gossip because Julian’s isolation means that what people are doing becomes really interesting. So, we gossip away, we talk about children and wives, and mothers, and girlfriends, and that other stuff, and friends that have died or moved on. Just gossip, really.

Sputnik: I think you heard recently that Assange has been removed from solitary confinement; that’s a product of lobbying both by his lawyers but apparently also three separate petitions written by his fellow prisoners…

Sputnik: Were you aware of the fact that Assange is receiving support or solidarity from his fellow prisoners?

John Shipton: I did meet the petitioner’s wife. Yes, I rang her up and thanked her.

Sputnik: When was that?

John Shipton: Just some time ago, about three weeks ago.

Sputnik: If there’s something that you would want people to understand about your son, what would that be?

Sputnik: Recently it was also announced that US government is lagging in its legal submissions in relation to the extradition case at least; the documents that it submitted to the relevant party senior in the UK, that the Trump administration is claiming that protections under the First Amendment of US Constitution as they relate to freedom of the press and freedom of speech, don’t apply to foreign journalists. Have you heard? Are you aware of that claim?

John Shipton: Yes, I see that they keep on extending their claims to continue with the judicial abduction of Julian. If I can make the point that over the last 10 years the United States has introduced a policy. The policy covers two areas. One is that of judicial abduction, rewriting extradition treaties between nations, any nation that they could rewrite to simplify extradition. The other is extrajudicial murder. So, in the case of judicial abduction, there is Mike Lynch, Julian Assange, Ola Bini, and the Chief Executive Officer of Huawei. They abduct people who are journalists or who have the knowledge of technology that the United States wants. The parallel policy is extrajudicial murder which we have just seen demonstrated with the murder of Soleimani. This is taking the United States outside the civilised family of nations. And they seem determined to plunder Europe and to extend their laws to every other nation in the world.

John Shipton: Oh, I guess there will be a heap of things, but asylum in Europe somewhere and humanitarian visas. Also, I would like to ask Julian if he would he be interested in some litigation similar to the Hassan Diab’s family which is suing the French government and the Canadian government for $90 million.

Sputnik: How much time are you going to get with him this time around?

John Shipton: Probably an hour and a half. There will be three of us in the meeting [room].

Sputnik: Three of you in the meeting [room] at the same time?

John Shipton: Yes, yes, and also there is high definition cameras. So, we will find that we have to speak like that so that they can’t lip read.

Sputnik: Really? So you will have to speak under your breath?

John Shipton: We will just hold it like that so you can’t see the lips move. It is not the volume of the sound as the high definition cameras are in the ceiling, about a dozen of them actually in the meeting room.

Sputnik: Are you able to describe let’s say for people who don’t know who can’t know what it’s like as a father to go through what you are going through, what you have been through?

John Shipton: Oh… Well, it is you get a bit driven… The greater the insults to Julian and members of my family, the stronger I become and the more determined. So I no longer count the cost and I think other fathers and mothers, of course, would recognise that feeling that ‘you don’t count the cost’ to yourself. Whatever it costs, you do. Without being too overly dramatic, even until death you just don’t count the cost.