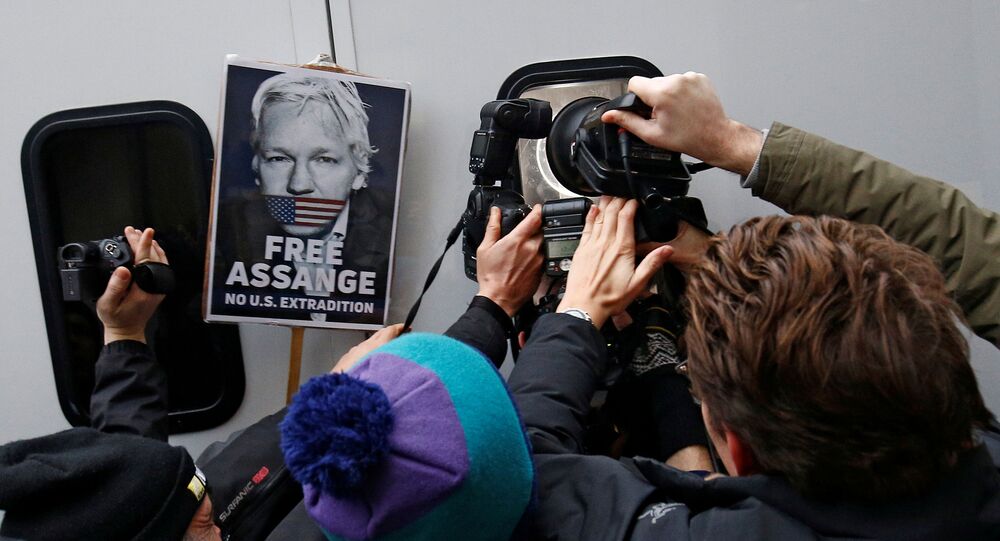 MOSCOW (Sputnik), Valentina Shvartsman – The 48-year-old Australian is fighting extradition to the United States on 18 charges, including conspiring to hack government computers and breaching an espionage law, after his website leaked hundreds of thousands of secret cables in 2010 that exposed the US military’s wrongdoings.

Lawyers defending WikiLeaks founder Julian Assange have not received adequate time with him during his confinement at a high-security UK prison, Renata Avila, a member of the legal team, revealed.

"Only two hours of legal consultation were made available for Julian between 19 December and 13 January. That is the problem that the lawyers have," Avila said.

Avila said that Assange’s legal team would be in trouble if they continued getting as much access to their defendant as they had managed to negotiate over the past weeks.

"Imagine if that will be the dynamic between the beginning of March and his hearing in May! If that is the case there would be not enough time to prepare for such a complex set of hearings with lots of technical evidence, with lots of witnesses", she maintained.

Avila argued that she did not see any clear signs of Assange getting more time with his lawyers in the near future.

The lawyer also stressed that even the delay of the second half of Assange’s US extradition case hearing until May did not substantially change the balance of power of the whole case.

"I think that even with the extension of time it is not equality of arms. You cannot, not even with the best lawyers, win a political persecution that has all the resources in the world on the other side and also that had access to the arguments and to the strategy of your defence team. I don't know why this case is not over yet", Avila maintained.

Westminster Magistrates' Court in London ruled last week to split a month-long extradition hearing into two parts, with a week-long session set to begin on 24 February and the rest pushed back to May and early June.

Assange is awaiting the hearing at Belmarsh Prison in east London. He was forcibly removed from the Ecuadorean embassy in the UK capital in April of last year after he was stripped of asylum status. He had lived at the diplomatic mission since skipping bail in 2012 for fear of being handed over to the US.

WikiLeaks founder Julian Assange’s lawyers see the whistleblower's decision to not go to a London court and instead seek asylum at the Ecuadorean embassy after he was released on bail to be his universal right, Avila believes.

The lawyer stressed that going to the Ecuadorian embassy was Assange’s very last chance to exercise his rights.

"Exercising rights is not jumping bail. It is a superior right. I think that the situation that he is into now, how he is placed into this very precarious prison conditions, is just punishment by process", Avila said.
The United States wants Assange on 18 counts, including conspiring to hack government computers and breaching an espionage law. The 48-year-old Australian faces up to 175 years in prison if found guilty. An international legal team is challenging the US request on freedom of speech grounds.

The WikiLeaks founder was stripped of asylum status in April of last year and taken to a high-security London prison, from where he has been fighting US extradition.

A UN special rapporteur on torture said in November of last year that Assange was being held in UK detention exclusively because of the US extradition process, after he completed his prison sentence for breaching the UK bail terms. He demanded that the whistleblower be promptly released.

According to Avila, additional strain is being put on WikiLeaks founder Julian Assange's health by the lack of time he has with his lawyers to prepare arguments against his extradition to the United States.

Avila described the terms of his imprisonment as "precarious" and failing to meet the minimal standards of dignified living. She criticised the United Kingdom for having violated international laws by preventing him from accessing healthcare and other basic rights while still holed up at the embassy.

"It is really sad that the UK with the support of Sweden, with, probably, the pressure of the US, treated one of our most valued journalists as he was a dangerous criminal, and the only crime that Julian has ever committed is journalism", the lawyer added.

A UN special rapporteur on torture said last November that the 48-year-old’s health had deteriorated since his arrest in London in April to the point where his life was at risk. Assange is being held at a high-security prison ahead of his US extradition hearing but has had little access to his legal team.

Team of lawyers working on WikiLeaks founder Julian Assange’s US extradition case in the United Kingdom has his "highest trust", Avila said.

Avila argued that the legal team had gained Assange’s trust after working with him for a decade. She said Assange’s legal team handling his UK case was a small core group of lawyers working around the clock to fend off the entire apparatus of the US Department of Justice, and therefore had little time for daily briefings.

"Most of them, if not all, do not charge Julian. Not all, but most of them are doing pro bono because they like Julian and they believe in the principles and what he represents", Avila said.

WikiLeaks founder Julian Assange’s lawyers also have high hopes of winning the case against a Spanish firm after collecting "tons" of proof that it spied on him at the Ecuadorian embassy in London on US orders.

"In Spain, I have high hopes. We have tons of documents evidencing this, and I hope that the Spanish system will … be up to the task and independent on assessing this case", Avila said. "The case in Spain is a very important case because it is the case where we saw the evidence of gross violations of human rights consented by the UK and also it proves a serial, even systematic surveillance of doctors and lawyers of Julian," Avila stressed.

The lawyer said Assange’s legal team had evidence that the US had orchestrated the wiretapping by paying the Spanish company through a US intermediary.

"There was a monetary deal between the Spanish company and a US company, and then the US company was somehow connected to the US intelligence. So you will have involvement of the US government in the surveillance", she explained.

The case is being heard by a court in Madrid separately from the extradition request by the United States, which wants Assange on 18 counts, including violating an espionage act. The whistleblower, who is being held at a London prison, argues that he is being punished for having his website publish hundreds of thousands of secret US documents on wars in Iraq and Afghanistan.