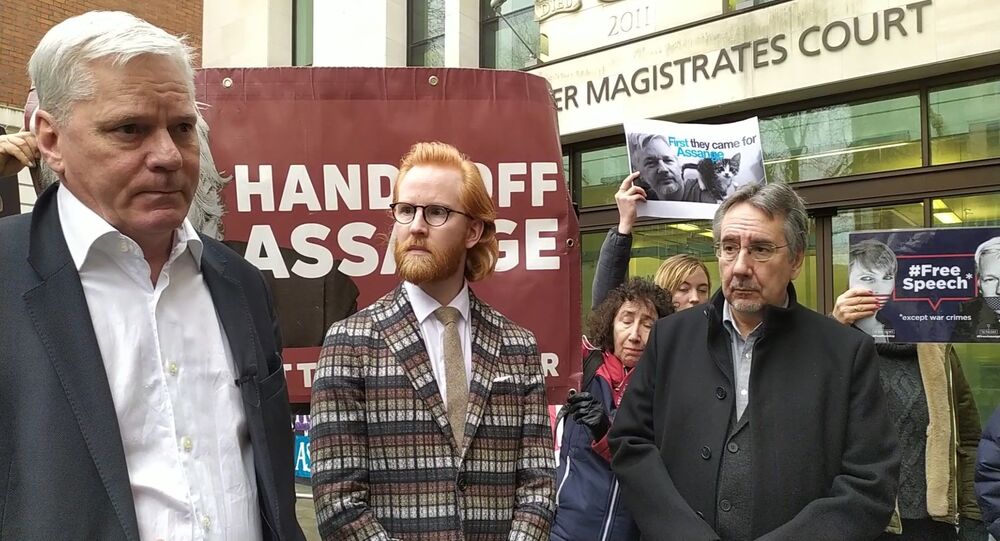 Wikileaks publisher Julian Assange faces up to 175 years in prison in the US on charges relating to his role in publishing classified documents which revealed alleged war crimes perpetrated by US forces in Iraq.

The US government is now claiming that foreign journalists don't get the benefit of the First Amendment of the US constitution, which guarantees freedom of speech and freedom of the press, in a bombshell revelation from WikiLeaks's editor-in-chief, Kristinn Hrafnsson.

Hrafnsson, a long-time Icelandic investigative journalist, revealed that he had seen written submissions from the US government, which they served on Julian Assange's defence lawyers, which form part of their arguments in support of the ongoing extradition case against the WikiLeaks publisher.

Standing outside of Westminster Magistrates' Court, following Assange's most recent Case Management Hearing (CMH) on 23 January 2020, Hrafnsson said the argument that the First Amendment only applies to US citizens is a "totally outrageous" position that exposes the "true nature" of the extradition case against Assange. The First Amendment states that, "Congress shall make no law... abridging the freedom of speech, or of the press; or the right of the people peaceably to assemble, and to petition the Government for a redress of grievances."

Hrafnsson explained that it is especially dangerous for the US to on the one hand claim that foreign journalists aren't guaranteed First Amendment protections while at the same time retaining the right to "hunt down journalist all over the world". The extra-territorial application of US laws is a threat to all journalists Hrafnsson argued, pointing out that Assange faces prosecution in the US despite the fact that neither he nor WikiLeaks have ever been based in the US.

"That should send a very clear message to all journalists about the importance of this case. And about the true nature of this case, the political nature of it. It's an attack on press freedom. If anybody was ever in any doubt about that this should erase all doubt", he said.

There should now be "no doubt" that prosecution of #JulianAssange is about press freedom, as it's revealed that US prosecutors claim 1st amendment protections "don't apply to foreign journalists", @KHrafnsson told me today outside Westminster Magistrates' Court. pic.twitter.com/o2Esx9i08s

Another major revelation, also from written submissions filed by the US government, is that US authorities intend on subjecting Assange to Special Administrative Measures (SAMs). The US-based Centre for Constitutional Rights (CCR) describe SAMs as representing "the darkest corner of the U.S. federal prison system" which combine "the brutality and isolation of maximum security units with additional restrictions that deny individuals almost any connection to the human world". This little-known practice which the CCR described as facilitating "torture" would restrict whom Assange could met or speak to as well as what anyone he speaks to could then say thereafter.

"In other words as soon as [Assange] leaves this country and goes to the United States he is going to be put incommunicado in what is essentially a freedom of information black hole", John Reese, of the Don't Extradite Campaign, explained.

Reese, who also attended the CMH on 23 January, described the combination of the "assault on the First Amendment" and the imposition of SAMs against Assange, as showing that "the United States intends for there to be no effective justice in this case whatsoever".

Two related bombshell revelations following today's hearing:
1) US prosecutors are arguing the 1st amendment doesn't apply to foreign journalists;
2) #JulianAssange will be under Special Administrative Measures if extradited.@JohnWRees, @DEAcampaign, reacts to both: pic.twitter.com/m6WBoaaNqo

​Assange's lawyers have long complained that he continues to be denied proper access to his legal team and his case file by prison authorities at Belmarsh. While the matter has been repeatedly raised with Judge Vanessa Baraitser thus far she has refused to intervene with Belmarsh prison on Assange's behalf, despite being presented with precedent of another judge intervening with the Governor of Belmarsh in a separate case. If the US ultimately subject Assange to SAMs, as court documents apparently show that they will, neither he nor his lawyers could address the public or anyone else about anything he is experiencing without facing severe criminal penalties.

The Australian citizen, who remains imprisoned in the maximum security Belmarsh prison despite finishing his 50 week sentence for absconding while on bail (when he sought and received asylum in the Ecuadorian embassy) in September 2019, faces up to 175 years imprisonment for his role in publishing classified documents which exposed alleged corruption and criminality on the part of US occupation forces in Iraq. Many of the documents published by Assange and WikiLeaks have also been published by establishment outlets such as The Guardian, The New York Times and The Washington Post.