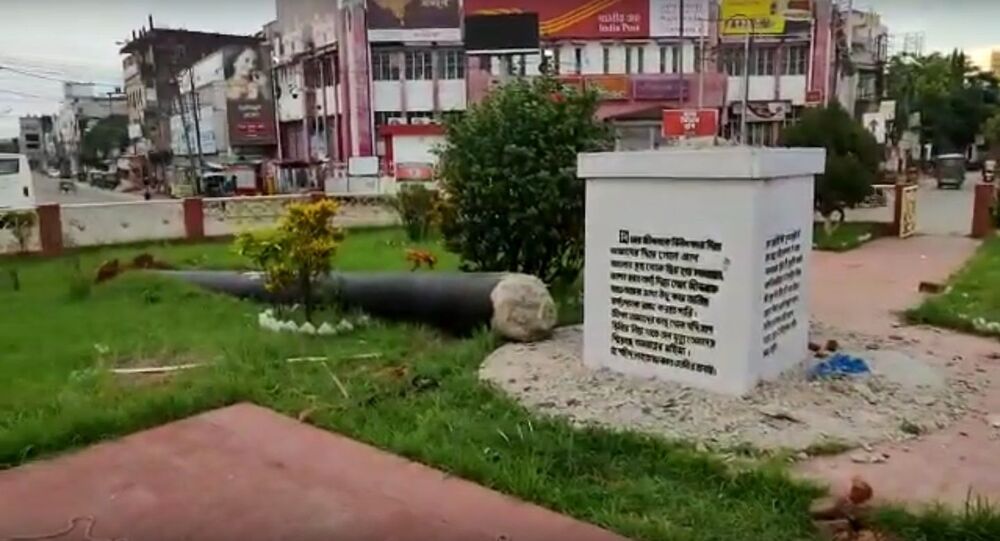 India's north-eastern state of Tripura emerged as a strategically significant base during the 1971 Bangladesh Liberation War as the border state not only provided shelter to refugees but also allowed logistics-related support to Bangladesh, which was part of Pakistan.

A section of scholars and political parties both in Bangladesh and India have expressed displeasure that a memorial in the Indian state of Tripura erected in memory of the martyrs of the 1971 Bangladesh Liberation War has been taken away.

​The state government in Tripura which is led by the Bharatiya Janata Party decided to move the martyrs' column from the centre of the state capital Agartala to the city's outskirts as part of the Smart City Project.

The state government, however, says it is building a bigger war memorial.

Every year, the Indian Army pays tribute at the martyrs' column during the country’s Independence Day (15 August) and Republic Day (26 January).

Last November, the Tripura government relocated a battle tank and an artillery gun from the same spot. Both were relics from the 1971 war.

A group of 20 scholars from Bangladesh have appealed to the Indian government for help and to insist the memorial be replaced to its original location. "The 40-ft-tall martyrs' memorial at Post Office Chowmuhani in the centre of Agartala, the capital of Tripura, is one of the most important monuments to the common liberation aspirations and friendship of the people of India and Bangladesh," the scholars have written in a letter.

"We feel sad at the relocation of the war memorial which commemorated the history of these two countries, forged in blood.

“We request the Indian authorities restore the memorial column to its original place and preserve the symbolic memorials of both countries," the letter continues.

In India, expressing sorrow at what the Tripura government has done, Bibhu Bhattacharya, secretary of the Tripura Sanskriti Kendra (Tripura Cultural Centre), told Sputnik: "The government should have consulted with artists, writers and historians before taking any decision.”

“We urge the state government to relocate the martyrs' column to its original location. This is destroying our glorifying history," he added.

The move has also sparked a political row between the opposition Congress party and the ruling BJP.

Congress, on Thursday, staged protests in Agartala against what the state government had done. "Removing the memorial is an offence against the memory of people of both the countries and to the martyrs," Tapas De, Congress spokesman, told reporters.

​Last year, the Tripura state government issued a statement about its plans to relocate the war memorial: "It was a long-standing demand of the Indian Army to make a big war memorial combining both of these war memorials.

“The Army and Sainik Board raised this issue in front of [state chief] Biplab Kumar Deb when he came to power in 2018. The project was taken up under the Smart City Mission after open tender at the cost of $643,000 (INR40.8 million)," it added.

Historically, Bangladesh celebrates Independence Day on 26 March - the day East Pakistan, which formed a single country with Pakistan at the time, launched its 1971 campaign for liberation and seceded to become Bangladesh in December of the same year.

India played a vital role in the conflict, entering into military confrontation with Pakistan. It later resulted in both sides signing the Pakistani Instrument of Surrender on 16 December 1971, ending the war and paving the way to the birth of an independent country - Bangladesh.