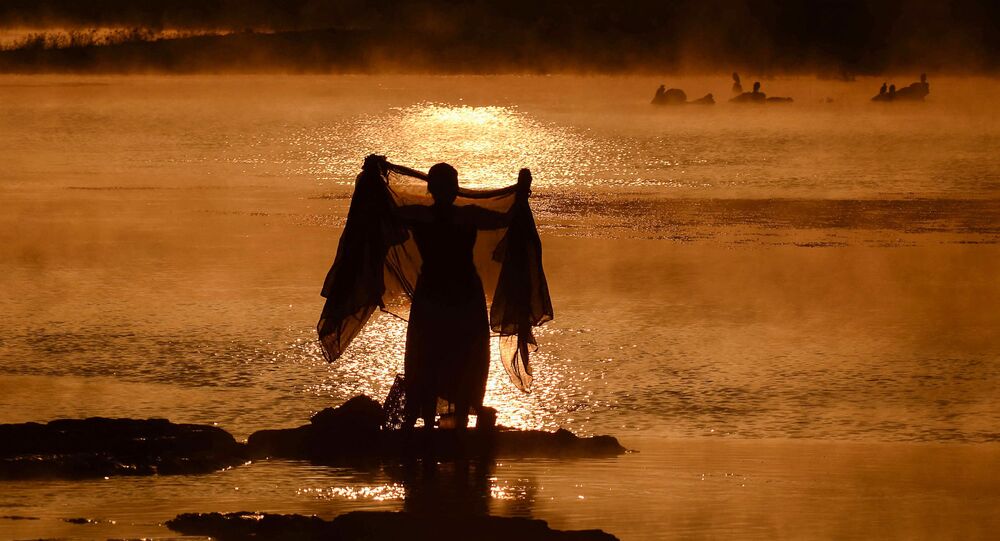 India is perhaps the only country in the world that celebrates all the seasons as well as the five elements of Mother Nature via various festivals throughout the year. The origins of these tradition-drenched festivals date back to centuries ago – which Indian society has preserved as part of its heritage even into modern times.

Based on the alignment of the stars on Friday, India marks the “birth anniversary” of one of its holiest rivers - the Narmada. The river, which originates from a narrow creek in central India's Amarkantak city, stretches over 1,000 kilometres and passes through Gujarat state, to finally flow into the mighty Arabian Sea.

According to Hindu mythology, the goddess Narmada is the daughter of Lord Shiva, who was transformed into a river as a blessing for humankind and animals. The holy scriptures say that while dipping into the Ganges River can rid one of their sins, merely looking at the Narmada River can purify one’s soul.

© Sputnik
‘I’ll Take Them From Rags to Riches’: Indian Math Wizard Tutoring Kids On the Ghats of River Narmada
Sanskrit chants dedicated to the river amid the sounds of beating drums echo across the two states that the Narmada flows through. Blessed food (an offering to God) called “prasad”, as per traditions, is distributed to people on all of the river’s banks.

Marking “Narmada Jayanti”, thousands of devotees in the states of Madhya Pradesh and Gujarat flock the "ghats" (banks) of the pious river with earthen lamps, coins, vermilion, turmeric, and flowers to offer to the river they fondly call “Maa” (mother).

Throughout the day, worshippers also take holy dips in the river water to cleanse their mind and body of sins.

As part of the celebrations, temples built along the banks of the river in various villages and cities have been lit up with lamps and colourful lights, along with floral decorations.

Take a look at the grandeur of the celebrations being observed to mark the Narmada River's coming into being.

In Jabalpur, a quaint town in central India, the emerald green waters of the Narmada River plunge from a height of 98 feet surrounded by pristine natural white marble rocks to make for one of India’s famous waterfalls – Dhuandhaar.

At Dhuandhar, a string of floating lamps have been visible for two days now, being released by thousands of devotees coming to offer prayers at the banks.