‘I’ll Take Them From Rags to Riches’: Indian Math Wizard Tutoring Kids On the Ghats of River Narmada 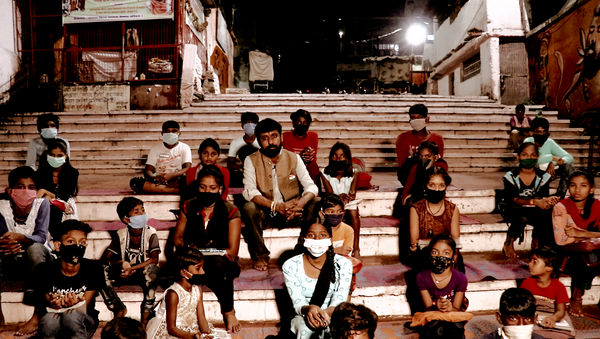 Radhika Parashar
All materialsWrite to the author
In 1947, India finally won back its independence from the discriminatory colonial regime that prevented Indians from growing in their own motherland. In the last 73 years, free India has had to struggle with several roadblocks on the path to development – and one of them has been providing education to as many children as possible.

Thousands of poor Indians still dwell on the streets, and as their daily struggle is to make enough to afford one meal a day, educating their kids doesn’t quite make it on their list of priorities.

No government scheme matters to these underprivileged people, who do not even have the slightest clue about the initiatives that have been rolled out for their benefit in the first place.

In central India’s quaint city of marble – Jabalpur – the “ghats” (banks) of holy river Narmada provide a place to sleep for hundreds of impoverished people, who resort to selling flowers, sweet offerings and paper lamps to devotees who flock there to offer prayers.

Aiming to pull the young kids loitering around the Narmada ghats from the tough life of uncertainty they’re leading right now, Parag Diwan, a 39-year-old “mathamagician”, has taken it upon himself to tutor and sponsor higher education for these children he calls “angels”.

From treating these kids to pizza parties and movies in multiplexes, every evening Diwan, fondly known as “Parag Bhaiya (elder brother)”, sets up his whiteboard by the flowing river and teaches complex subjects like maths, physics and chemistry to hundreds of kids.

Some of his ghat students have now emerged as “human computers”, solving tangled equations verbally.

Sputnik got in touch with the modern-day “guru”, whose story is not just inspiring, but also very emotional.

“It was in 1998, I was in my late teens when I started teaching. Well, I was a notorious kid being raised up by a strong single mother after my father’s demise,” said Diwan.

“One day, my mother caught me stealing money from her purse when she decided that I needed to learn the lesson of how hard one has to work to earn money. So she assigned me a task to teach some subjects to a tea-seller’s son in my neighbourhood,” he shared.

The tea-seller’s son ended up scoring 45 out of 100 on a math test – marking the first time he ever passed an exam in the subject.

Before Diwan knew it, his first student started bringing along friends who needed tutoring.

“Within no time, I had a bunch of 10 ninth-graders who started paying me to teach them. I started earning, which gave me a kick.”

“In 1999, I began cycling around the city, hopping home-to-home teaching school kids. This went on for five years, after which in 2004 I rented a small room, installed benches and a whiteboard and never looked back,” Diwan said.

This tiny room Diwan mentioned has become an iconic tuition institute in Jabalpur.

For the last 16 years, the same room has been flooded with thousands of students from schools all over the the city who firmly believe that only Parag Bhaiya could make them crack their high school exams with flying colors, and they are never disappointed.

The income earned by this bachelor tutor goes into helping kids on the river banks thrive.

For the last three years, just like his classroom, Diwan’s under-the-stars classes on Narmada Ghats have been echoing with the loud collective voices of pupils, literally reciting subjects unanimously and making the answers and solutions sound like “cake talk”.

Diwan’s mission to take the lives of these underestimated kids from “rags to riches” is backed by a solid plan he’s working to execute in the coming post-COVID times.

“I will open an institution and name it Narmada Preeti International School – after river Narmada and my mother whom I lost some years ago. This school will be one of its kind, where students themselves will be teachers…”

“Twelfth graders will teach eleventh graders, who will teach tenth graders and so on. The salary for these student-teachers will be deposited in their accounts which will make sure that money-wise, their families are comfortable,” the math prodigy revealed to Sputnik.

This year, on India’s Teacher’s Day (5 September), Diwan’s students created a full-length feature film on their favourite teacher in an attempt to forever preserve his story on celluloid.

In previous years, students showered Diwan with extravagant gifts including a sports bike on Teacher’s Day, but this film has topped the list of student tributes to their guru.

“Bhaiya was very clear that he did not want anything outlandish on his birthday. Over the years, Bhaiya’s previous students had set the bar pretty high anyway. So we decided to turn his story into a movie,” Himanshu Thakur, the Director of Photography (DoP) of the film, told Sputnik.

The movie will tell the tale of the “tutorminator” – as his students designate him – including his life-changing decisions that has now earned him the title of “guardian of the ghats” in central India.

During these past tough months of the pandemic, wearing a badge of India’s national flag, Diwan has been providing meals twice a day, clothing and mosquito nets to the ghat dwellers, including stray animals and birds. He also keeps the young ones engaged in fun after-class activities.

Diwan has decided to go by one mantra for the rest of his life – “You give a man fish, you’ll feed him for a day. You teach a man how to fish, he’ll feed himself forever.”

The Indian education system presently has emerged to become one of the largest in the world, with over 1.5 million schools, 8.5 million teachers and 250 million children enrolled in schools. Despite this progress, at least 35 million kids aged between 6 and 14 are deprived of education in India.

Like Diwan, inspiring stories of several Indians taking efforts to give education back to the community keep making it to the headlines.