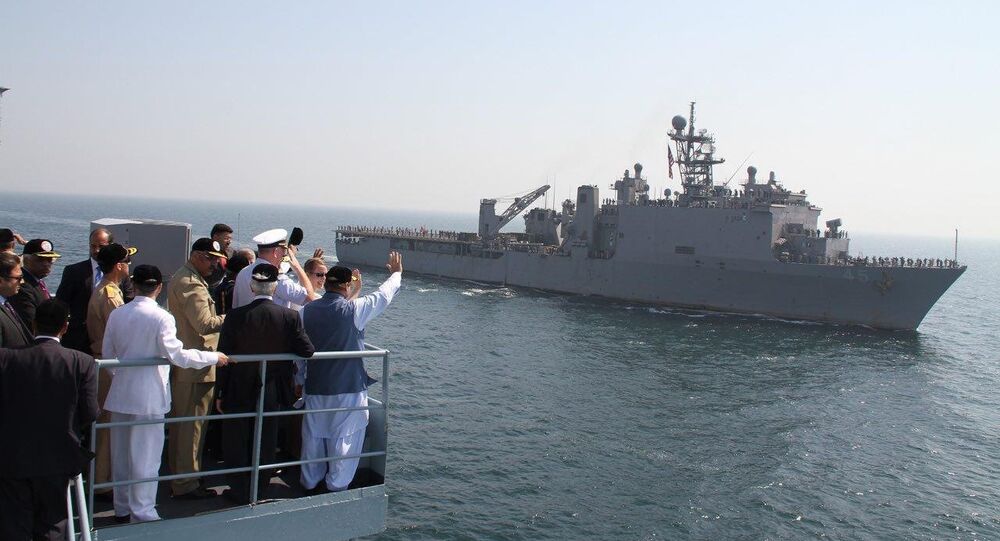 Pakistan on Thursday kicked off the seventh edition of its biennial Aman Naval Drills, with the participation of naval assets from 45 other countries. Islamabad says that the drills aim to promote regional cooperation and stability and greater interoperability among participants in the Indian Ocean region.

“The drills are part of Pakistan’s consistent attempt to balance India in the neighbourhood waters. What should worry New Delhi is the presence of navies from countries like Turkey, Malaysia as well as China,” Vasan told Sputnik, pointing out that India’s four-nation Malabar naval drills in the Indo-Pacific waters had left countries like Pakistan “vulnerable”.

“So, New Delhi shouldn’t take these drills for granted. There is a hidden geostrategic message directed at India as far as Pakistan is concerned,” says Vasan, currently the director of Chennai Centre for China Studies, an Indian think tank.

The ex-Indian Navy veteran refers to a statement by Pakistan’s fleet commander, Rear Admiral Naveed Ashraf, at the Aman drills, noting that Beijing has been “helping” Islamabad match its naval capabilities with that of New Delhi in recent years due to the China-backed multi-billion yuan China Pakistan Economic Corridor (CPEC), part of the One Belt One Road Initiative.

The CPEC, a network of infrastructure and connectivity projects, runs from China’s Xinjiang province to the port of Gwadar, located near Karachi at the Arabian Sea coast.

“Our interest in safer and crime-free seas is rooted into three conspicuous realities — our extraordinary dependence on the seas for trade, making the China-Pakistan Economic Corridor project operational and our strategic location astride the global energy highway,” Ashraf was quoted in Pakistani media, underlining the importance of the CPEC to Pakistan’s economic security.

© CC BY-SA 2.0 / Michael Scalet / The mighty Indian Navy!! [DSCF2721]
Can Indian Navy be Check-Mated by Pakistan, China in Indian Ocean in Near Future?
Vasan says that there was “no doubt” that China and Pakistan wanted to jointly challenge Indian naval supremacy in the Arabian Sea.

China has been heavily investing in major maritime and non-maritime projects, especially in countries such as Sri Lanka and Pakistan, where it is building strategic bases, and growing its presence in the Indian Ocean Region (IOR).

​Since 2017, the Pakistan Navy has contracted construction of four Type 054A/P frigates from China, with the first ship launched in August 2020.

Vasan offered to dispel fears around the participation of countries like Russia, the US and Australia, all of them "friendly" with India, in the Pakistan-backed naval drills, explaining that different governments had different expectations from participating in the sea exercises.

“Many navies are there to evaluate the security environment in the region, learn about their adversaries and update their databases. Many might just be interested in selling their security equipment,” says Vasan.

Russian Navy participation in the drills is being closely watched in India, given that Moscow is participating in joint naval drills with the North Atlantic Treaty Organization (NATO) after a gap of 10 years.

Moscow's participation comes amid the resumption of the four-nation Malabar drills, with the Royal Australian Navy participating in exercises last year after a gap of 13 years. Moscow has expressed uneasiness about the informal Quad alliance, prompting reassurances from Delhi that its vision for the Indo-Pacific sees Russia as a crucial partner.

According to an official statement by the Russian Navy, Moscow sent a frigate, a patrol ship, a tugboat, a sea-based helicopter and some other units to the 46-nation drills.