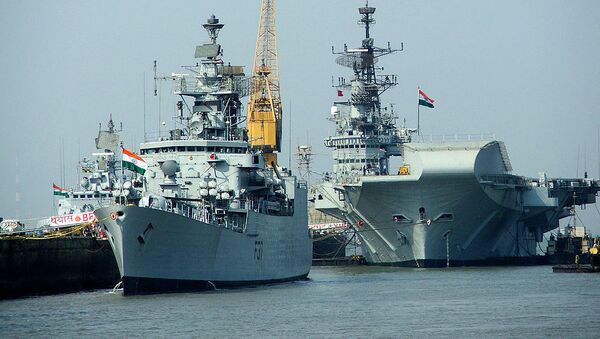 Rishikesh Kumar
All materialsWrite to the author
New Delhi (Sputnik): China has been investing hugely in major maritime and non-maritime projects, especially in countries such as Sri Lanka and Pakistan, where it is building strategic bases, growing its presence in the Indian Ocean Region (IOR).

The Indian Navy received a meagre $3.7 billion for naval modernisation from the country’s annual budget which was presented to the parliament on 1 February. This is just slightly up on the $3.6 billion last year, as India's navy struggles to counter the Chinese Navy’s growing influence in the Indian Ocean.

Navy chief Admiral Karambir Singh has publicly admitted that the latest fund allocated is insufficient for a growing navy.

“It will have a huge impact on modernisation. With bulk of the allocation going towards payment of the committed liabilities, very little will be left for new acquisitions,” Amit Cowshish, former finance advisor to the defence ministry said while warning of the threat posed by India’s neighbours whether it is arch rival Pakistan, China or Bangladesh.

Can India Succeed in Being More Than a Net Security Provider?

India has developed goodwill in the recent past by being the first responder to IOR nations’ needs in case of natural disasters.

But according to Anil Jai Singh, retired Indian Navy Commodore and defence analyst, providing humanitarian relief to friendly countries is secondary and the navy should prepare itself for war scenarios.

“Navy will have to induct more next-generation frigates, destroyers, corvettes and missile vessels and not only ships that are merely play role in piracy or secure country’s 7,516 km long coastlines and 1,382 islands,” he added.

But the budget allocation suggests the navy is unlikely to receive funding to buy new aircraft carriers, minesweepers, naval helicopters or jet aircraft.

The funding constraint is already being felt with modernisation plans put on hold and the number of warships forecast to be in operation by 2027 falling to 175 from an earlier plan by the then Indian Navy chief Sunil Lanba that called for 200 ships, 500 aircraft and 24 attack submarines. At present, the Indian Navy has around 132 ships, 220 aircraft and 15 submarines.

“What is point of 15 years plan? In the absence of committed budgetary support, navy is not sure whether their plan in the 15th year will be achieved or not. Still, navy’s plan is not realistic,” former Indian Navy Commodore and defense analyst Singh added.

“In this scenario, from where we will build additional warships? And Also we have to keep in mind that several frigates or destroyer to be decommissioned in next 10 years as well,” Anil Jai Singh asked while questioning the navy's 15 year plan.

Chinese Navy has six to eight warships venturing into the India Ocean at any given time. The country has been building at least 20 warships per year compared with just 1 or 1.5 for India.

“Presently, China lacks the capability to deploy their warships for longer time in India’s backyard. But as their strength has been growing rapidly, they can rotate their warships easily especially when President Xi Jinping has laid out plans to turn the People's Liberation Army into a modernised force by 2035 and a world-class army by 2050,” Anil Jai Singh pointed out.

The Pakistani Navy doesn’t currently pose any major threat to India. The Indian Navy can easily choke the movement of Pakistani warships by deploying some of its assets in the northern Arabian Sea.

But this could change in the near future if Pakistan receives support from China. As well as receiving eight submarines and four frigates from China, Pakistan has been developing four major ports– Karachi, Ormara, Jiwani and Gwadar. These developments are likely to make India’s energy supply line through the Arabian Sea increasingly vulnerable.