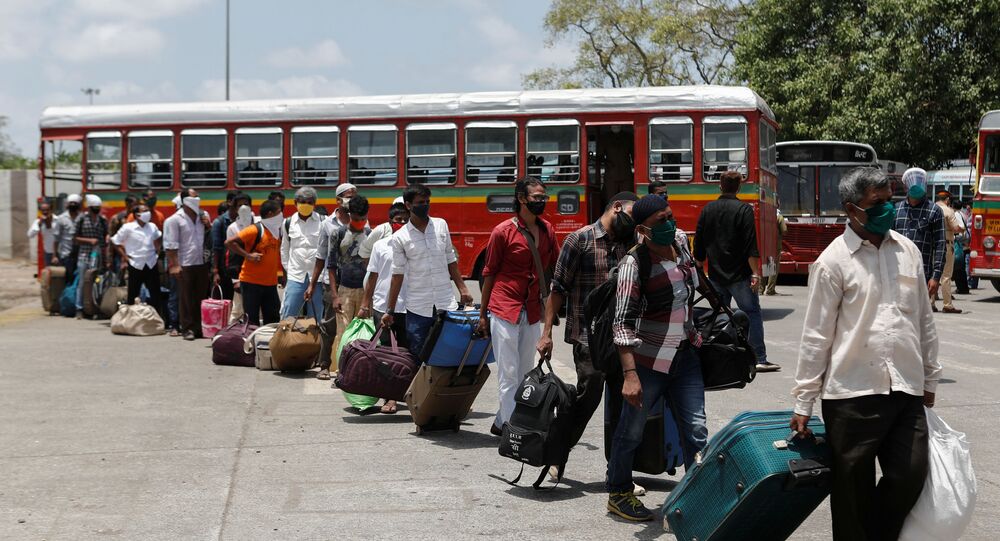 New Delhi (Sputnik): The Congress party has been raising the issue of the plight of the poor and the migrant labourers ever since the COVID-19 contagion began. Even though the lockdown will continue until 31 May, the Indian government has provided some relaxation, such as operating special trains and flights.

India's principal opposition, Congress, has accused the governing Bharatiya Janata Party (BJP) in the Indian state of Uttar Pradesh of harassing and witch-hunting its leaders for trying to help the state’s migrant labourers stranded outside amid the pandemic. UP is governed by state chief Yogi Adityanath, who is a firebrand BJP leader.

Congress said its senior leader and Uttar Pradesh Congress Committee President Ajay Kumar Lallu has been lodged in a solitary cell in the state capital of Lucknow. Cases have also been filed against Congress leader Priyanka Gandhi’s close aide Sandeep Singh and another leader, Pankaj Malik, according to the party.

The party informed media persons in New Delhi on Sunday that Lallu was sent to judicial custody by the Yogi government for offering help to the state by arranging buses for bringing back migrants stuck in different parts of the country amid contagion. Lallu was implementing Priyanka Gandhi’s proposal to the UP government to arrange 1,000 buses to ferry the stranded persons.

Briefing the media in New Delhi on Sunday, senior Congress leader Rajeev Shukla said, “Cases have been filed on grievous charges against the Congress leaders. We do not want to confront the UP government and our intent is to help poor amid the pandemic. Still our leaders and workers are being harassed by the UP government. Our party state President Ajay Kumar Lallu has been lodged in solitary cell in Lucknow”.

The bus row between the Congress and the BJP-led UP government took place last week with Priyanka Gandhi’s proposal to help dispatch stranded migrants in buses arranged by the party at its own cost on 16 May. Two days later, on 18 May, the UP government accepted the offer and asked the party to send the details of all the buses, which it did.

However, at 11:40 PM on the same day, the UP government wrote to Priyanka Gandhi’s office to despatch the buses to UP’s capital Lucknow – almost 500 kilometres away from the UP’s border, where they were parked. The migrants were also stuck at the border itself waiting to board the buses.

© AFP 2021 / NARINDER NANU
Massive Surge of Sick People to Emerge After Easing of Lockdown in India, Epidemiologist Warns
Congress, however, said that UP is “doing politics” and expressed their inability to do so. On 19 May, the UP government alleged that the buses did not have proper papers like insurance and registration and denied permission to ply. On 20 May, Ajay Kumar Lallu was sent to judicial custody on charges of cheating for allegedly providing forged documents of buses to the government. In the end, the stranded migrants remained stuck, while the buses were went back.

Shukla, however, told media persons in Delhi on Sunday that the party had arranged the buses from the Indian state of Rajasthan, where it governs. “The documents of the buses provided by the party are in order. We have checked it from the Rajasthan transport commissioner. On what basis then the charges of fraud have been framed against Lallu?” Shukla asked.