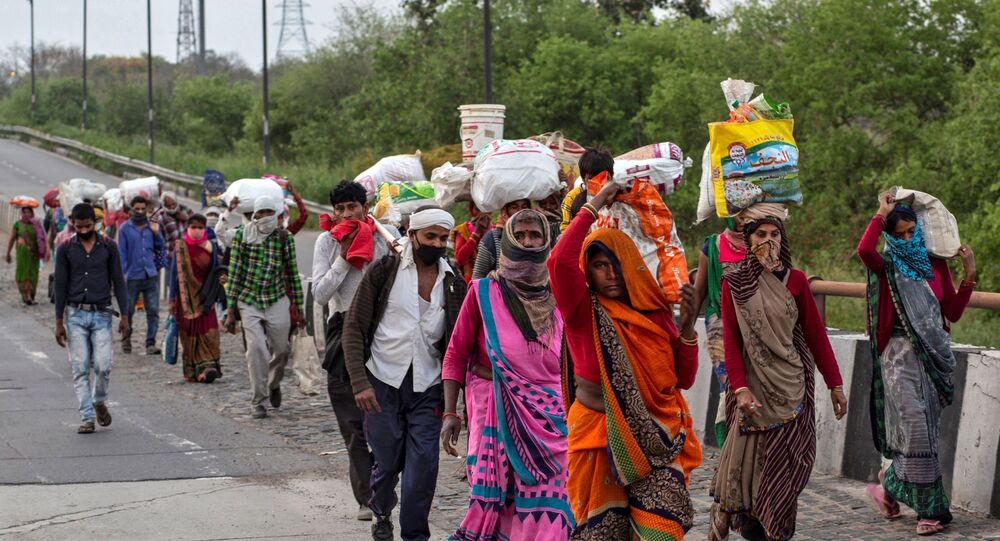 New Delhi (Sputnik): A 40-day national lockdown to contain the spread of COVID-19 has resulted in a sluggish economy with millions losing their jobs in India. The United Nations had estimated that around 400 million workers will slip into poverty due to the pandemic.

The working committee of India’s primary opposition party, Congress, met via a videoconference on Thursday to discuss the implications of the lockdown on the economy.

Congress party chief Sonia Gandhi said: “120,000,000 jobs have been lost in the first phase of the lockdown. Unemployment is likely to increase further as economic activity remains at a standstill. It is imperative to provide at least Rs 7,500 ($100) to each family to tide over this crisis”.

The government has announced a $22.36 billion relief package for daily wage earners who lost their jobs during the COVID-19 lockdown. Along with providing five kilos of either rice or wheat per person for three months, the government also announced a $66,000 insurance policy to cover "frontline warriors" in the COVID-19 battle like nurses, paramedics, and sanitation workers.

Congress lawmaker Anand Sharma had earlier suggested that Prime Minister Narendra Modi should be bold in declaring an economic package of at least 5 to 6 percent of gross domestic product, which translates to between $98 and $117 billion.

On the lockdown, which has come with economic fallout, former Prime Minister D. Manmohan Singh said, “The success of the lockdown is to be judged finally on our ability to tackle COVID-19....Cooperation between the centre and states is the key to the success of our fight against COVID-19".

The party members also raised concern about the situation in states under the lockdown.

Rajasthan state chief Ashok Gehlot said, “Unless the central government comes forward to financially help the states, the fight against COVID-19 will get weakened...Unless there is a big financial package for states, how will normalcy return to the states post-lockdown?”

The Indian economy was slowing down even before the pandemic. From 8.2 percent GDP growth in 2018, it fell to 4.7 percent in 2019. The International Monetary Fund has said that it will further come down to 1.9% this year.