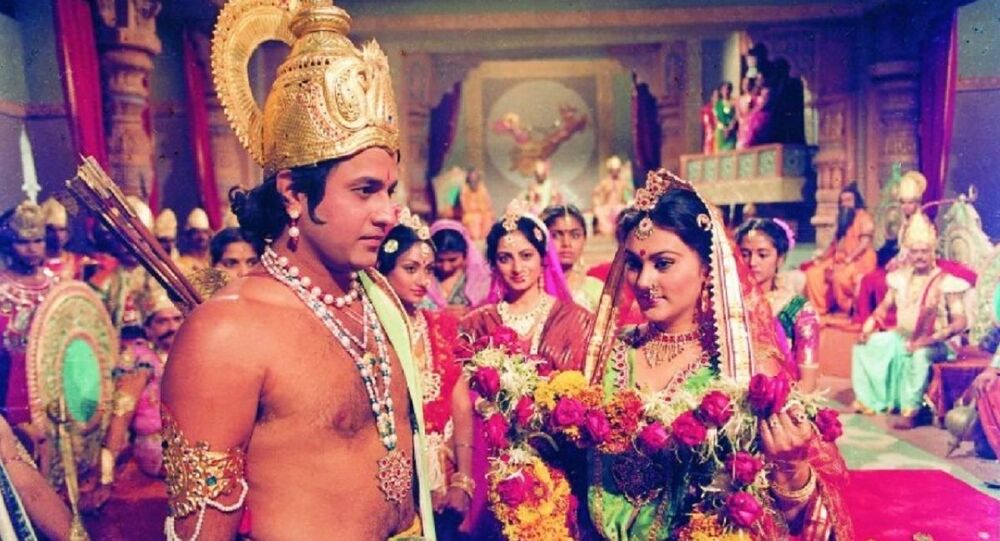 New Delhi (Sputnik): With 1.3 billion people under lockdown in India, it seems the Netflix generation is making the most of their time by watching the mythological series on television. The legend of Lord Rama, who goes into a 14-year exile, has been shown since 28 March on public demand.

The three decades old show, Ramayana, based on an ancient Sanskrit epic about Prince Rama's battle to win back his wife after she is abducted by Ravana, has smashed all viewership records worldwide to become the most watched entertainment show in the world, according to India’s Public service broadcaster

Rebroadcast of #Ramayana on #Doordarshan smashes viewership records worldwide, the show becomes most watched entertainment show in the world with 7.7 crore viewers on 16th of April pic.twitter.com/edmfMGMDj9

The Sanskrit poem originally written by Saint Valmiki around the 5th century BCE, was turned into a television series by director Ramanand Sagar. The series has been an imperative part of millions of Hindus' lives across the world.

Interestingly, it broke all popularity records when it was first aired from 25 January 1987 to 31 July 1988. Back then it kept Indians glued to their screens when it came on at 9:30 p.m. on Sunday, this at a time when even owning a TV set was a luxury for many in the country.

Ramayana is the tale of Lord Rama, who goes into 14-year exile with his devoted wife, Sita, and loyal brother, Lakshmana. But the peaceful saga turns into war when Sita is abducted to Lanka by Ravana. Rama then fights a battle with a monkey army to win her back.