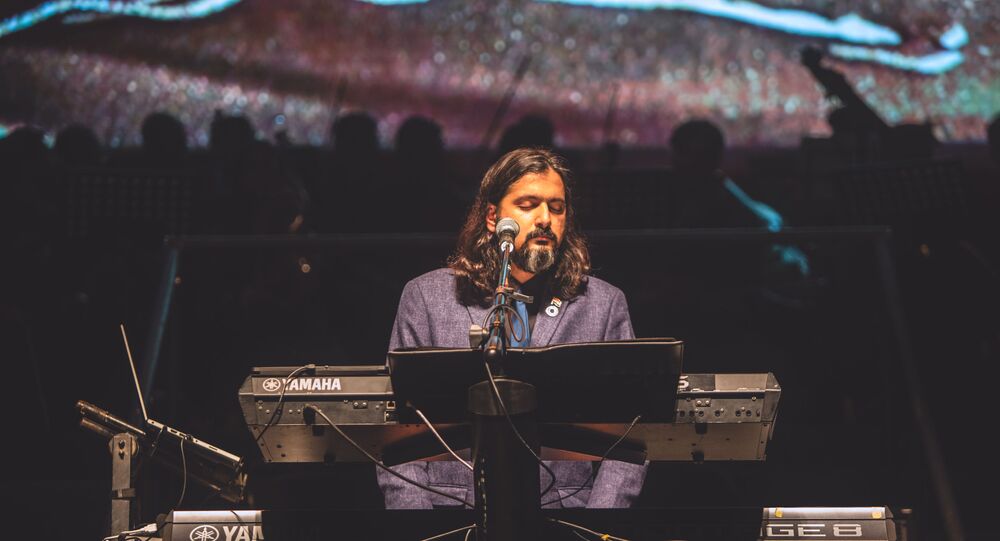 New Delhi (Sputnik): Music heals the soul and keeping this in mind, WWF India is co-hosting "Ricky Kej LIVE at One Page Spotlight", a digital music concert on Earth Day, 22 April. As many as 44 artists, from six nations, including Grammy award winners, will create a musical symphony for a safe, resilient, and sustainable world.

Grammy award-winning composer and environmentalist Ricky Kej with support from the World Wide Fund (WWF) for Nature and UNICEF, is hosting a one-of-a-kind online music concert to leverage the global power of unity and strength to mobilise millions in a collective call for transformative action for our planet.

The musician believes that music has the power to bring calm in chaos.

“Music has always played a role in capturing emotions and conveying a larger, important message. This is the reason music has always been used in political activism, grassroots movements, and several other areas to create awareness and to stir action. The pandemic has thrown the entire world into chaos and during these times, music can provide hope and comfort", Kej tells Sputnik.

“We need to remain positive and harmonies such as my new anthem ‘Shine Your Light’ hopes to do just that", the musician, who won a Grammy at the 57th Annual Grammy Awards in 2015 for his album “Winds of Samsara” in the Best New Age Album category, adds.

For Earth Day, an annual event celebrated around the world on 22 April to demonstrate support for environmental protection, Kej has prepared a special song called “Shine Your Light” for this virtual concert.

When he wrote this song, he did not realise that it would be so relevant.

“‘Shine Your Light’ is an anthem of hope, solidarity, unity and above all - kindness. Through this song, we seek to inspire people to be kind to one another as a simple act of kindness can change lives and positively impact society", Kej summarised.

The 60-minute concert will feature a performance by Kej and the World Ensemble with the aim of inspiring humanity to create a world where it is possible to live in harmony with each other and nature. It will also include some renowned singers, composers, and artists including Grammy award winners like Ricky Kej, Babba Maal, Laura Dickinson, Wouter Kellerman, Pt. Vishwa Mohan Bhatt, and many international musicians.

Being a Grammy winner and strong voice to inspire many, he has revealed why it is important for social figures like him to step up, take charge, and be the change that this world wants to see:

“I have always believed that only when people start acknowledging an issue and start a dialogue to solve it, a solution will come. My aim is to inspire this dialogue through my music. Music has the power to retain a message deep in the consciousness of a listener. I do all I can to create awareness about the environment and positive social impact through my music", he says.

“Social figures have been given a platform to make a real difference and we should make full use of it. Musicians have attentive listeners and engaged audiences, and I believe creating music just for entertainment is not enough. There is more to music than just entertainment, even though we must entertain our audiences irrespective of what path we choose", added Kej.

So what’s next after this digital concert?

“I am currently working on an exciting musical project with India’s only individual Olympic gold medallist, Abhinav Bindra and three-time Italian Olympic gold medallist Niccolo Campriani called ‘Taking Refuge’. We will unveil this shortly. I am also working on some brand new music and there are several more projects in the pipeline", he explained.

Kej has also revealed that he believes Indian artists have always been recognised internationally:

“Thanks to greats like Pandit Ravi Shankar, Ustad Allah Rakha, and others who took Indian music to a revering level of international recognition. Some of the greatest music in history has stemmed out of these spectacular collaborations. I thank these legends for making the way for musicians like me to showcase to the rest of the world", said the musician.

“I am also very grateful for all the collaborations I am able to have with hundreds of musicians from India and different parts of the world. I have learnt a lot from every musician I have collaborated with, added Kej.

This year also marks the 50th anniversary of Earth Day and WWF India and this concert will be showcased live on multiple streaming channels.