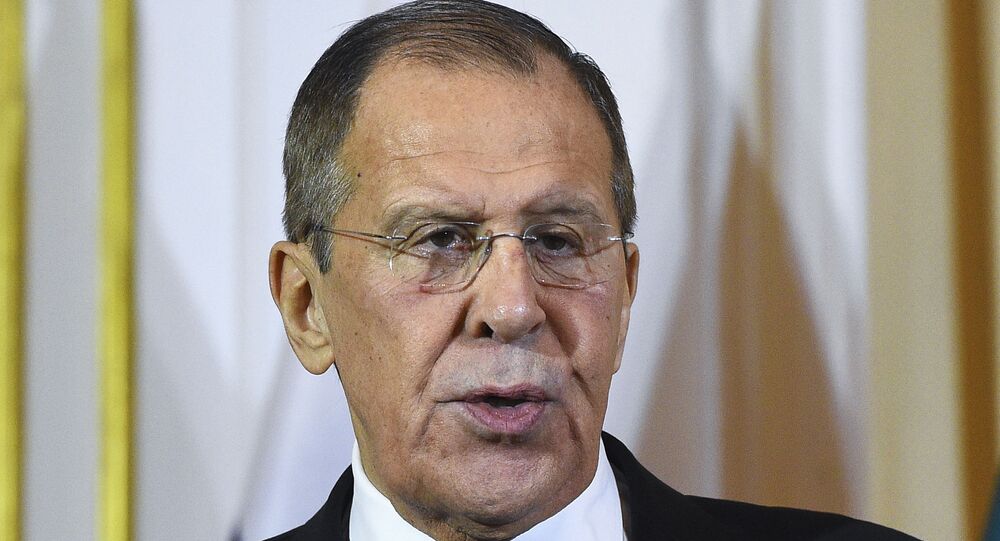 New Delhi (Sputnik): The Russian foreign minister spoke at the Raisina Dialogue, being held in the Indian capital New Delhi, a multilateral conference committed to addressing the most challenging issues facing the world. Global leaders in policy, business, media and civil society are attending the conference to discuss international cooperation.

"Our Western friends' aim in using the term Indo-Pacific instead of Asia-Pacific in matters of cooperation is to contain China and Indian friends are smart enough to understand that. It's not even hidden," Russian Foreign Minister Sergei Lavrov speaking at the Raisina Dialogue conference on Wednesday.

Commenting on the Russian President Putin's idea of a Eurasian Economic Union, which brings together Russia, ASEAN, South and East Asia, and the broader idea of greater Afro-Eurasia, Lavrov said:

"We are not against terminology, but it should be understandable. When people say we want to develop cooperation in Asia-Pacific as Indo-Pacific strategy, we asked how it is different; we were told it is more democratic. We don't think so. It is rather tricky. We have to be careful about the terminology which looks benign but is not. Terminology should be unifying, not divisive. Neither Shanghai Cooperation Organisation (SCO) nor BRICS is exclusionary."

The United States uses Indo-Pacific for the major Asian democracies India, Japan and Australia, which will work with America forming a quad, for safe and secure economic cooperation.

In 2018, the United States renamed its oldest and largest military command - the Pacific Command - to Indo-Pacific Command, in a symbolic move to signal India's importance to the US military amid heightened tensions with China.

Use of Certain Terminology Substantive Trend

Commenting on the terminology and its use, Lavrov questioned why the West insists on a rules-based order and not international law.

"International law is based on resolutions by the UN Security Council; the rules which America wants to apply are different. Once, the UN Secretary-General in his report mentioned the need to counter violent extremism. We asked, why not all extremism?" said Lavrov.

Explaining how it's not just terminology but a substantive trend, Lavrov gave an example of why America wants to counter just violent extremism.

"We have been told that extremism is born in authoritarian societies where dictators do not allow sufficient democracy for the people. Therefore, the international community has to go around dictators to reach civil society, and explain how to make countries democratic, ignoring international law and principles," he said.

Addressing cooperation with India, Lavrov said Russia is studying possible ways of expanding energy ties with India. He noted that India is the third-largest consumer of energy resources in the world, and could in the future become the first non-Arctic state to carry out mining activities in the Arctic, through offshore projects cooperation with Russia.

"Today, such tasks as qualitatively improving the bilateral trade pattern and shifting its focus from commodities to high value-added products are taking priority. We need to move forward, build a portfolio of joint projects, forging new technological alliances in advanced, knowledge-intensive industries," the foreign minister was quoted as saying.

He also said that the main obstacle to growing economic cooperation between Moscow and New Delhi were the differences in taxation rules.

"Yet, India's asymmetrical tax treatment of foreign business as compared to the regime enjoyed by Indian entrepreneurs in Russia remains the sticking point. Consultations on the removal of trade barriers are underway to make our domestic markets more attractive for mutual investments," he said, as quoted by the Economic Times.

Russia and India have a long history of technological cooperation going back to the Soviet period. However, rapidly changing technology gives both countries brand new avenues of cooperation.