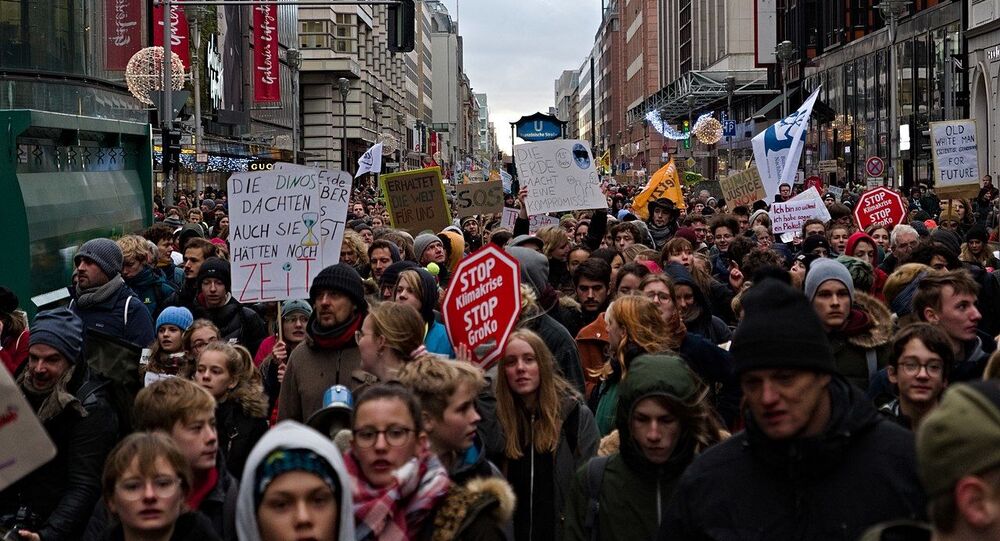 The climate organisation Fridays for Future spearheaded by Swedish climate activist Greta Thunberg has weighed in on the Israeli-Palestinian conflict by calling Palestinians "martyrs" and labelling Israel "officially an apartheid state".

Over the course of the recent flare-up in the Middle East that left hundreds of people dead, Fridays for Future published a series of tweets supporting the Palestinian side, primarily based on opposition to Israel's settlement policy.

"We stand with the Palestinian people against settler-colonisation. We stand against all forms of colonialism and systematic repression by militaries and institutions", Fridays for Future tweeted, posting a picture titled "Why is a climate group posting about Palestine".

We stand with the Palestinian people against settler-colonization. We stand against all forms of colonialism and systematic repression by militaries and institutions.

​In the same thread, the organisation called the Palestinians who died during the conflict "martyrs".

"Our hearts are with the martyrs and the lives that have been lost. The violence and loss of life is a tragedy and their blood will not be forgotten. May their memory be a blessing and a revolution", Fridays for Future tweeted, after calling to fight against "incarceration, the ID system, and the restrictions to [the] Al-Aqsa Mosque".

Fridays for Future in Quebec, Canada, subsequently declared that Israel "has officially been an apartheid state since 27 April". This is a reference to a recent report from Human Rights Watch that slammed Israel's policy towards Palestinians as being apartheid-like.

Before one exercises his/her choice to fight for climate, one's rights to fundamentally exist must be respected.
Israel is officially an apartheid state since 27 April 2021.https://t.co/gOEy78GRh8

​The movement assured that it stands "against anti-Semitism and all forms of discrimination", yet also made clear that it "primarily listens to the colonised and oppressed people (in this case, Palestinians especially)", emphasising "solidarity and community'.

While bringing forth a mixed bag of reactions, ranging from praise to condemnation, these tweets sparked internal strife, as Fridays for Future Germany distanced itself from the statements that it labelled anti-Semitic.

"An article on the Middle East conflict was published today on international FFF channels that spreads anti-Semitic content. Anti-Semitism is in no way compatible with our self-image. As stated in the post, we clearly distance ourselves from all content", it said.

​However, others, such as Friday for Future Scotland, stuck to its "anti-colonial" guns and condemned their German counterparts.

We stand firmly in solidarity with Palestine. Our movement is inherently anti-colonial, and we stand with all oppressed groups. #FreePalestine

We strongly disagree that the recent posts from FFF International are antisemitic, and we condemn FFF Germany for claiming so.

We unequivocally stand with the Palestinian people and against settler colonialism. #FreePalestine https://t.co/Sf21jc6h86

​Incidentally, the founder herself, Greta Thunberg, declared last week that she is not "against" any party to the conflict.

"To be crystal clear: I am not 'against' Israel or Palestine. Needless to say I'm against any form of violence or oppression from anyone or any part. And again - it is devastating to follow the developments in Israel and Palestine', she tweeted earlier this month.

To be crystal clear: I am not “against” Israel or Palestine. Needless to say I’m against any form of violence or oppression from anyone or any part. And again - it is devastating to follow the developments in Israel and Palestine.

​Spearheaded by Greta Thunberg, Fridays for Future, also known as School Strike for Climate and Youth for Climate, is an international movement of school students who skip Friday classes to take part in demonstrations calling their political leaders to take action to prevent climate change and fast-track the transition away from the fossil fuel industry to renewable energy.

The recent round of aggression between Hamas militants in the Gaza Strip and Israel broke out on 10 May after days of violent clashes between local Arabs and Israeli police triggered by court rulings to evict Palestinian families from the East Jerusalem neighbourhood of Sheikh Jarrah, as well as a ban on Palestinians visiting certain holy sites during Ramadan.

As a result, Hamas fired thousands of rockets against Israel, who struck back with deadly airstrikes of its own. Before an Egypt-brokered ceasefire was struck, the 11 days of hostilities left 243 people in the Gaza Strip as well as 12 Israelis, dead.

'Definitely Going on My Resume': Greta Thunberg Calls Out Chinese Media for 'Fat-Shaming' Her