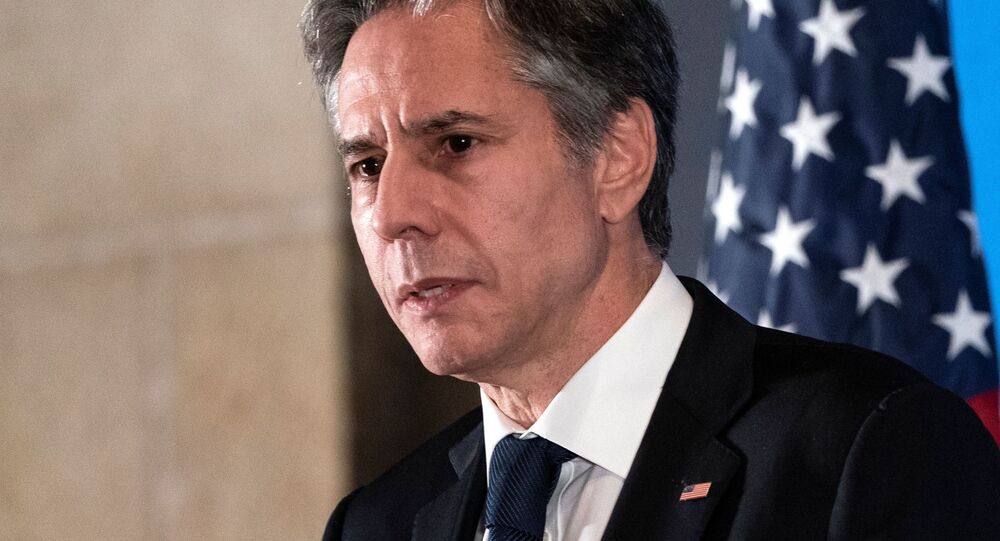 US Secretary of State Antony Blinken visited Jerusalem and the West Bank city of Ramallah on Tuesday to meet with Israeli and Palestinian leaders.

Antony Blinken has called the "two-state solution" for Israel and the Palestinian National Authority (PNA) the "only way forward," while saying that "any steps" by the two sides that risk more conflict would harm its prospects.

'Two-state solution' is a term that refers to a prospect of Israel coexisting alognside independent 'State of Palestine', which is not officially recognised by Tel Aviv and a number of countries across the world.

According to Blinken, the US will "oppose" anything that could create more tensions between the two sides.

“That includes settlement activity, it includes demolitions it includes evictions, it includes incitement of violence, it includes payment to terrorists," the secretary of state said during the press briefing on Tuesday.

"Ultimately, there's a possibility of resuming the effort to achieve a two-state solution, which we continue to believe is the only way to truly assure Israel's future as a Jewish and democratic state, and of course to give the Palestinians the state they're entitled to," Blinken argued.

During his visit to Jerusalem and Ramallah on 25 May, the US secretary of state met with Israeli and PNA politicians to discuss the need to address conditions that fuel conflict in the region.

According to Blinken, Palestinian people, including those in the Gaza Strip, need a "renewed sense of optimism." He pledged the US will provide $75 million in development aid to the PNA, and several more millions in relief support, but said the US will make sure "Hamas does not benefit from the reconstruction assistance."

© REUTERS / POOL
Israeli Prime Minister Benjamin Netanyahu and US Secretary of State Antony Blinken shake hands after a joint statement and meeting at the Prime Minister's office, in Jerusalem May 25, 2021

Blinken also revealed that the Biden administration was planning to re-open its consulate in East Jerusalem that was shut down in 2017 when Trump recognised Jerusalem as the undisputed capital of Israel, sparking outrage from Palestinians, who declare the western part of the city as the capital of a future independent Palestinian state.

© REUTERS / POOL
US Secretary of State Antony Blinken speaks during a joint press conference with Palestinian President Mahmoud Abbas, in the West Bank city of Ramallah, May 25, 2021

Blinken's visit comes shortly after an Israeli-Hamas ceasefire, which came into force on 21 May, put an end to an 11-day confrontation between Israel Defense Forces and the militant group, which holds de facto control over the Gaza Strip. The conflict claimed over 200 lives from both sides, mostly Palestinians.