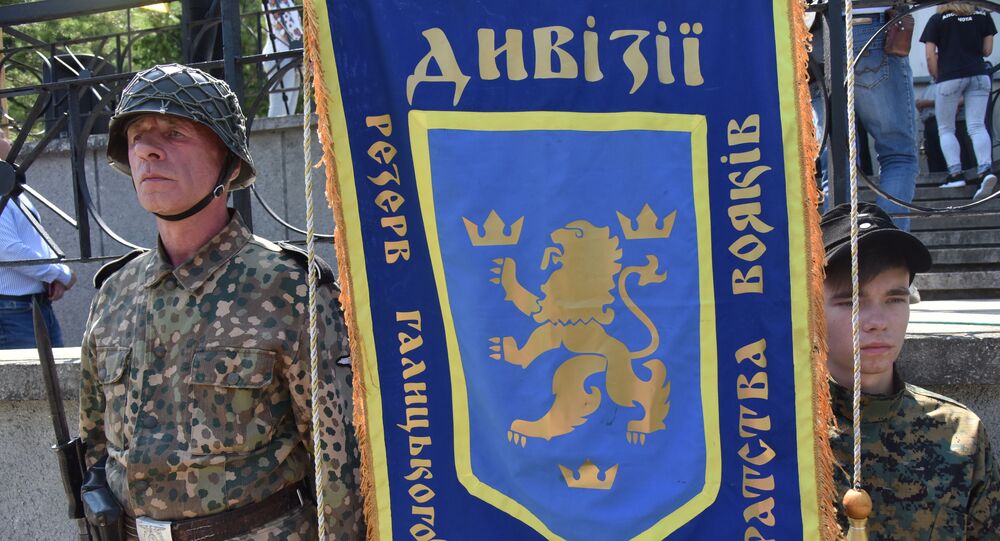 TEL AVIV (Sputnik) - The Israeli Ministry of Foreign Affairs expressed concerns on Thursday about a parade that took place in Kiev to celebrate the creation of SS Galicia Division, calling on the Ukrainian government to condemn the glorification of Nazi collaborators.

On Wednesday, Ukrainian nationalists held the first march in the center of Kiev to commemorate the anniversary of the foundation of the SS division during the Second World War. Previously, such parades were held in the city of Lviv.

"The Ministry of Foreign Affairs is concerned at last night's parade, held in the heart of the city of Kiev, to mark the establishment of the SS 'Galicia' Division. The SS Waffen units were involved in some of the worst crimes that took place during the Holocaust," a ministry spokesman said on Twitter.

Lior Haiat noted that preserving the memory of Holocaust victims, as well as fighting antisemitism, was not only an internal issue of each country but also part of the collective responsibility of humankind.

"We condemn the continued glorification of Nazi collaborators and expect the Ukrainian government to unequivocally condemn all such phenomena and prevent them from being repeated," the spokesman added.

The SS Division Galicia — a military unit that included more than 80,000 volunteers from the Ukrainian region of Galicia — was established on April 28, 1943, to oppose the Soviet Union, which began to make major advances against Nazi Germany and its allies in the Great Patriotic War (the 1941-1945 segment of World War 2). The division's personnel committed numerous atrocities in the territory of the Soviet Union and Poland.

The division existed until mid-1944, when it suffered heavy losses in the battle of Brody during a major Red Army offensive aimed at expelling the Nazi forces from Ukraine and eastern Poland.