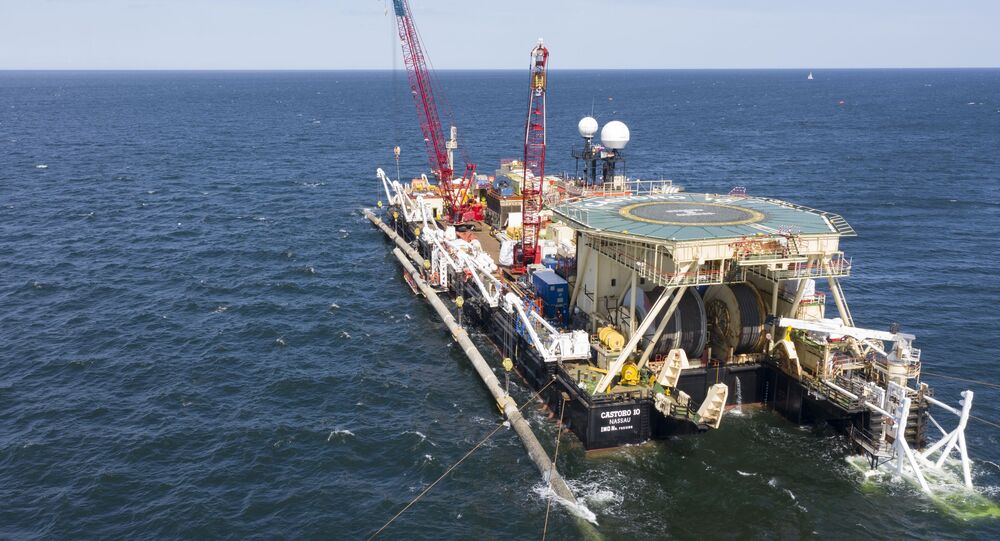 The company said that the provocative actions of several vessels, not all of which were identified as Polish, threatened the pipeline with major damages if not for the actions of the supporting ships at the construction site.

A spokesman for Poland's Minister-Special Services Coordinator, Stanislaw Zaryn has dismissed the statements of Nord Stream AG about the provocative actions of the country's military in the vicinity of the pipeline's construction as untrue. The official insisted that the Polish military engaged in none of the actions the company has accused them of and labeled the Nord Stream AG's report as "Russian propaganda at its finest".

Zaryn further claimed that Nord Stream 2 poses "serious national security [and] energy security threats" not just to Poland, but also to Ukraine and the countries of the Baltic region, while not elaborating on his claims.

At the same time, the Polish official failed to explain the photos and a video of a Polish warship, identified by its tactical number 823, made by the Nord Stream AG workers near the pipeline construction site and published by the company alongside its report about multiple harassments on the part of the country's military forces.

Apart from the Polish warship of unspecified class sailing into the 1.5 miles-large restricted zone around the pipe-laying vessel Fortuna on 29 March, Polish anti-submarine aircraft PZL-Mielec М-28В1 Rbi was also repeatedly spotted flying above the construction site at low altitude.

The company's representative, Andrey Minin, also revealed that the pipeline nearly sustained serious damage after an unidentified submarine resurfaced less than a mile away from the Fortuna. The submersible vessel could damage the pipe-laying barge's anchor lines, which spread more than one mile away, thus disabling the entire anchor positioning system, the Nord Stream AG official explained.

He also described several instances of fishing vessels, including those sailing under Polish flags, entering the 1.5 miles restricted zone, going on a collision course with Fortuna and failing to respond to attempts to make radio contact with them.

Minin said one such incident that took place on 21 February 2021, when Polish fishing ship SWI-106 entered the restricted zone and did not respond to repeated demands over the radio to quit the area. One of Nord Stream's supply ships was forced to plot an intercept course to "push out" SWI-106, but the fishing vessel failed to change its direction which resulted in a collision between the two, Minin said.

The Nord Stream AG said it filed several complaints with German authorities over multiple instances of harassment of the pipeline's construction. Poland, Ukraine and the US are among the main critics of the project, who groundlessly allege that Moscow will use the natural gas supplies as leverage in Europe. Kremlin, as well as proponents of the Nord Stream in the EU, such as Germany, have dismissed such concerns and insisted that the project is purely an economic one.