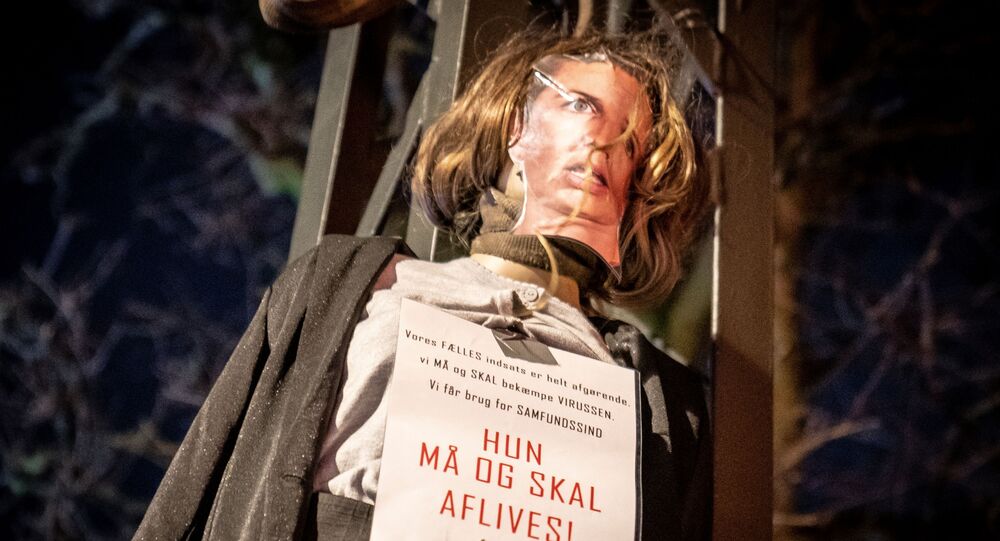 To curb the spread of more transmissible new coronavirus strains, Denmark introduced a partial lockdown, followed by other strict measures to contain the epidemic, including a ban on gatherings of over five people. So far, Denmark has seen over 194,500 Covid-19 cases and close to 2,000 deaths.

The demonstration was staged by a group called Men in Black, which dresses accordingly. The group seeks to protest what is perceived as a lack of common sense in the regulations introduced to limit the spread of the infection. This time, people were called to a peaceful march “for Denmark's freedom”.

According the the Danish newspaper BT, some 1,000 people gathered to vent their displeasure. Among others, a doll representing Prime Minister Mette Frederiksen was hung on a lamppost. There was a sign on the doll that she should be “killed”; the protesters later set fire to the doll. Several politicians have reacted strongly to the burning of the doll.

“It is very unpleasant, in fact a scary picture from the demonstration. It is a horrible part of the demonstration in Denmark to set fire to, behead and spit on a doll that represents the country's democratically-elected prime minister,” Social Democrats' spokesman Jesper Petersen said a comment to Danish TV2. “If you take it literally, it is a call for politically motivated killing. It does not belong anywhere,” he added.

This time, however, the police were on standby and quickly disbanded the gathering. A total of five people were arrested in connection with the demonstrations – among others, for suspected violence against the police, disruption of public order and not following police orders.

​“Everyone has the right to demonstrate, of course. But unfortunately we see again that a demonstration must be disbanded by the police and that the police are pelted with bottles and the like. Totally unacceptable,” Danish Justice Minister Nick Hækkerup said.

His indignation was shared by fellow politicians across the political spectrum.

“There are plain violent fascists. As simple as that. And we must not accept that,” Danish People's Party's values spokeswoman Pia Kjærsgaard told Danish Radio, calling for punishment for the organisers.

“It's a disgrace to attack the police”, Conservatives value and justice spokesman Naser Khader said, calling for more arrests. “I do not think that is enough. I hope you catch the rest and prosecute them, and judge them harshly”, he insisted. Khader drew parallels with the recent events in the US and the storming of the US Capitol. “It reminds a little too much of what happened in Washington DC a fortnight ago, and we shouldn't take inspiration from there.”

© REUTERS / RITZAU SCANPIX
Demonstrators hold a banner reading "Black-clad resistance" during a protest by a group called Men in Black against COVID-19 restrictions in Copenhagen, Denmark

Men in Black doesn't have a management or spokesperson and is organised via Facebook. The group is, according to its own statements, apolitical and therefore embraces everyone.

According to police, several people from the hooligan community were spotted at their demonstrations.

Eske Vinther-Jensen, public affairs adviser and author of reports on misinformation on social media, described Men in Black as a “mix of corona deniers, anti-vaxers, conspiracy theorists, alternative health professionals and people who are just very critical of the government's corona handling”.

To curb the spread the more transmissible mutated coronavirus variants, such as the British and the South African one, Denmark introduced a partial lockdown, followed by other strict measures to contain the epidemic. Among others, the maximum number of people who can gather has been lowered to five people, including private homes and social bubbles. The recommended minimum distance has been increased from one metre to at least two metres. The stricter measures include remote and online classes for pupils and students where possible, a ban on on-site consumption of food and drinks at restaurants and the requirement that indoor cultural and sports facilities must stay closed. Protective equipment is also requested.

The pandemic has also taken its toll on Denmark's economy, prompting the government to shut down all mink farms and gas its entire population of farmed mink, to avoid the spread of virus mutations.