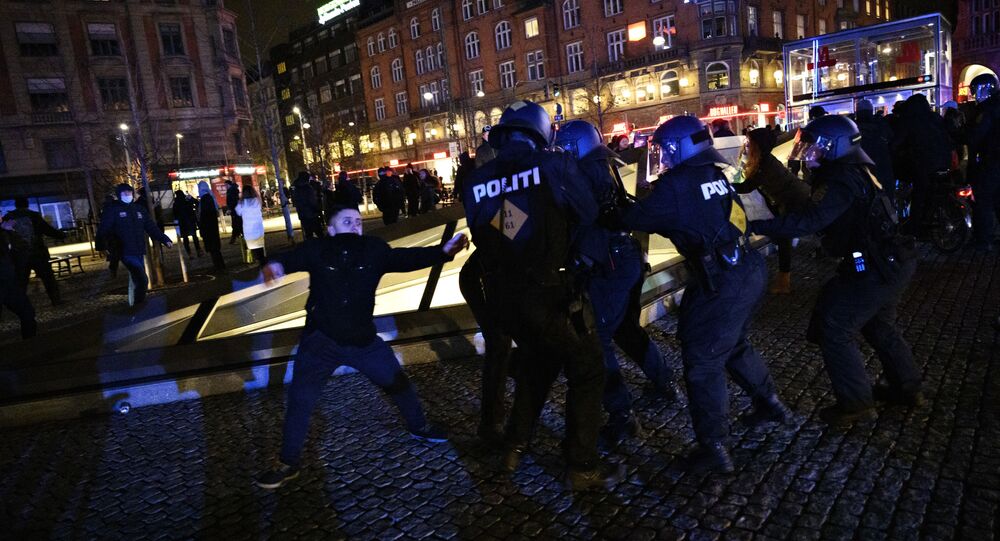 Plagued by a surge of coronavirus cases and faced with recently discovered mutated strains believed to spread faster and potentially endanger vaccination efforts, Denmark last week announced even tighter measures in addition to the lockdown, which has been in place since mid-December.

Dozens of people have been arrested in Denmark as demonstrations against the country's towering coronavirus restrictions turned violent in two cities including the capital Copenhagen, Danish Radio reported.

According to local reports, up to 250 people gathered in Copenhagen, and dozens in the northern city of Aalborg in demonstrations organised by a group called Men in Black.

The protesters sought to repeal the restrictions imposed on the country in a bid to stifle the spread of the coronavirus. They chanted "Freedom for Denmark, we have had enough", lit fireworks and hurled bottles, triggering clashes with police in riot gear.

​Rasmus Schultz, coordinating officer with the Copenhagen police, noted that some of the protesters were recognised as stemming from the "hooligan environment", which was later rejected by Men in Black.

"They called us hooligans. But we have neither sought nor created confrontation", the group wrote.

​Plagued by a surge of coronavirus cases and faced with recently discovered mutated strains believed to spread faster and potentially pose a threat to vaccination efforts, Denmark last week announced even tighter measures in addition to a lockdown, which has been in place since mid-December.

While the previous batch of measures included working remotely and the closure of schools, bars, restaurants and the majority of shops, the recent and stricter rules include a ban on gatherings of more than five people (down from ten) and a request to maintain a distance of two metres (up from one). Foreigners without a fresh negative test from the past 24 hours were banned from entering Denmark. All travel abroad was advised against, whereas airlines flying to Denmark were obliged to make sure that all passengers had tested negative to be able to land.

In another controversial move, Denmark also pledged to introduce "COVID-19 vaccine passports" later this year. Official proof of vaccination issued by the Ministry of Health is aimed at backing industries such as air travel and festival organisers, as well as help Danes tackle restrictions abroad.

"It is our expectation that there could be a requirement from other countries to produce COVID-19 vaccine documentation upon entry. This is where a Danish vaccine passport can be used", the Danish authorities said.

Denmark, a nation of 5.8 million, has seen over 180,000 COVID-19 cases with over 1,500 fatalities. The spread of mutated COVID-19 on the country's mink farms prompted the government to decree a controversial culling of over 15 million farmed mink to curb associated risks, thus eliminating an entire industry.