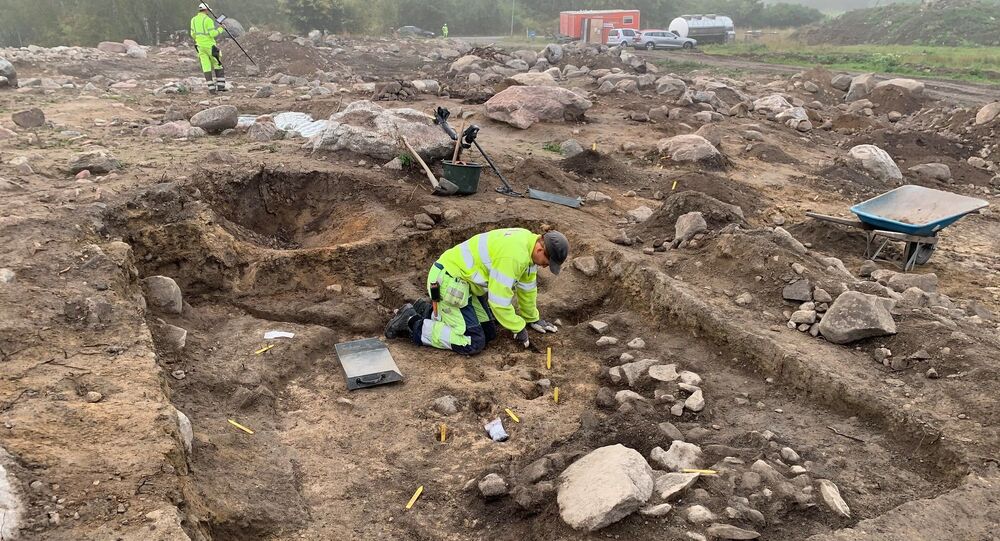 A unique trove of necklaces, bracelets and coins from far away has been unearthed in Viggbyholm in Täby municipality in Greater Stockholm.

While it's known from previous excavations that there was a Viking village on the site, the finds exceeded all expectations, national broadcaster SVT reported.

In 2019, traces of a prehistoric farm aged over a thousand years old were found in Täby. During the summer and autumn this year, archaeologists continued to investigate the area and found the remains of about twenty houses, including longhouses and pit houses, from the Late Iron Age and the early Middle Ages. The place is likely to have been inhabited for several centuries.

During the excavations, an urn containing eight silver necklaces, bracelets and several coins from different countries was unearthed. Traces of flax indicated that the coins had been placed in a cloth bag, which was then buried underground. It is unusual for archaeologists to find objects as intact as this silver treasure. The fact that the trove can be traced to a specific residential building makes the finding even more unique.

“In one place, the metal detector went off the charts and this is when we understood that an exciting discovery awaits,” archaeologist Magnus Lindberg of the Archeologists said, describing the find as a “once-in-a-lifetime” occurrence.

Several of the coins come from far away and bear witness to significant trade and contact with the rest of the world during the Viking Age. Among the coins are European coins but also five Arab silver coins, so-called dirhemes. One of the European silver coins comes from the city of Rouen in Normandy in France and is very unusual. This type of coin, likely dating back to the 900s, has been so far only known from two older drawings, according to Professor Jens Christian Moesgaard at Stockholm University, who assessed the coins.

According to Lindberg, there are telltale signs that the trove was buried and dug up again. The treasure was likely first buried in the 11th century and didn't see the light of day until a thousand years later.

“The classic interpretation is that people buried their silver and valuables to hide it in times of unrest and the question is whether this also applies here," John Hamilton, archaeologist and project manager, mused.

Since the middle of the 18th century, about 20 troves have been found in Stockholm County. However, only three of these findings were made through professional work, the rest was found haphazardly, for instance, in connection with construction. This marks only the fourth treasure found by archaeologists.

Täby used to be a city of its own in Stockholm County. In the mid-2010s, it fully merged into Greater Stockholm.