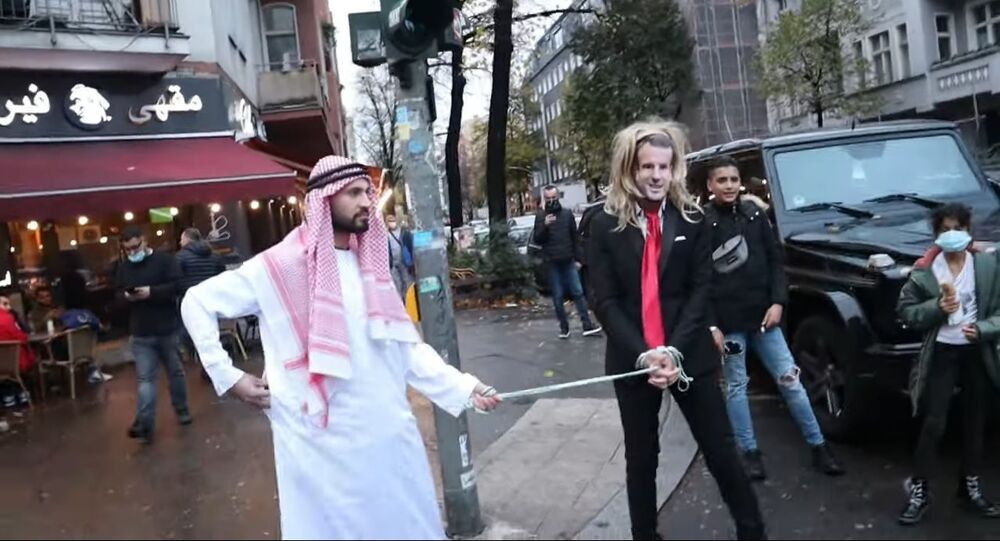 The unusual performance took place amid a wave of protests in Islamic countries and among Muslim communities worldwide against remarks made by the French president, who defended the right of people in his country to draw and show cartoons of the Prophet Muhammad – which is what purportedly prompted two knife attacks in France in October.

Berlin police have launched an investigation into the actions of German YouTuber of Syrian origin Fayez Kanfash, who in a recent performance for a video "dragged" another man wearing a wig and a mask with the face of French President Emmanuel Macron through the streets of the German capital. The pseudo-Macron had his hands tied with a rope that was also used by Kanfash as a leash to drag him along while "insulting him and pretending to beat him", as police described the act.

Officers stopped the YouTuber, who was wearing traditional Arab garb while dragging pseudo-Macron through Berlin's Alexanderplatz and burning copies of Macron-masks to screams of "Allahu Akbar" from around 20 people following him. It is currently unclear what crime the police are suspecting the YouTuber of committing with his performance, a video of which was later published on social media.

At the beginning of the video showing the stunt, Kanfash urges viewers "not to take it too seriously" and to respect the "German state".

It is unclear if Kanfash's performance was satirical or a protest. The act comes amid a wave of criticism towards Macron from Muslims all over the world, condemning the stance of the French president, who defended the right of French citizens to draw the cartoons of Prophet Muhammad – something that is considered blasphemous in Islam.

Macron articulated his tough position on the matter in the wake of two "terrorist attacks" on France, referring to two assaults that took place in October.

In the middle of October, schoolteacher Samuel Paty was beheaded by an 18-year-old Muslim who had been living in France for years. Shortly before the attack, Paty had showed Charlie Hebdo cartoons of the prophet to his students as part of a class on freedom of speech.

Two weeks later, on 29 October, another Muslim man, Brahim al-Aouissaoui, who arrived in France from Tunisia via the Italian island of Lampedusa shortly before committing the attack, assaulted worshipers at the Notre-Dame basilica in Nice, killing two visitors and a sacristan using a 12-inch (30-centimetre) blade. He was shot and apprehended by the police and is currently in hospital. Reports claim he kept shouting "Allahu Akbar" during his arrest.