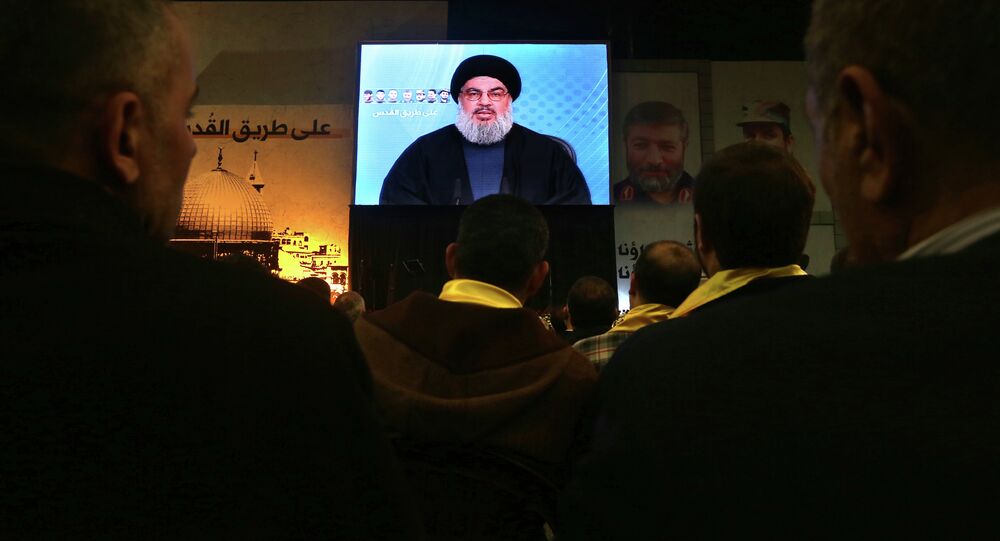 Last week, President Emmanuel Macron vowed that France would continue to "fight for freedom", in a statement made during a ceremony to pay tribute to a French teacher killed after he showed caricatures depicting the Prophet Muhammad to his students.

Hassan Nasrallah, head of the Lebanon-based Shia militant group Hezbollah, has warned France against its irreconcilable stance on caricatures of the Prophet Muhammad.

“Do not allow this mockery, this aggression […] to continue, and the whole world will stand with you", Nasrallah said on Saturday, urging France “to be fair and just”.

He added that instead of "fixing the issue", French authorities “became stubborn about this being freedom of expression” and that Paris should “think about correcting this mistake”.

The Hezbollah leader also condemned a recent deadly stabbing in the French city of Nice, stressing that “Islam […] forbids the killing of innocents”.

“Even if the perpetrator was a Muslim, no one should hold Islam accountable for this crime”, Nasrallah added, cautioning France against pursuing anti-Muslim policy.

“The French authorities have dragged themselves and the whole of France — [as] they want to drag all of Europe — into a battle with Islam and Muslims for flimsy and sometimes unknown reasons”, Nasrallah claimed, warning that it was a “losing battle”.

The remarks followed Friday’s statement by Tunisia's judiciary official Mohsen Dali that Brahim al-Aouissaoui, the Tunisian suspect in the deadly Nice attack, was arrested for violence and using a knife back in 2016.

In a separate development on Friday, French Interior Minister Gerald Darmanin said that he does not exclude more terrorist attacks on French territory as the country is engaged in a "war against Islamist ideology".

This followed President Emmanuel Macron telling reporters on Thursday that France was "under terrorist attack again" after a fatal stabbing in Nice, and that the country would not give up its values due to an "Islamist terrorist attack". The president also pledged to deploy 7,000 soldiers to protect key sites around the country as France's national security alert has been increased to the highest level.

© REUTERS / PASCAL ROSSIGNOL
Suspected Killer of French Teacher Found Victim After Bribing Schoolchildren, Prosecutor Says
Macron spoke hours after a man armed with a knife attacked people in the Notre-Dame de Nice Cathedral, killing three people — including one by beheading, according to reports — before being seized by the police.

During a ceremony to pay respect to Paty, Macron pledged that France will go ahead with its fight for freedom.

"We will continue, professor. We will defend the freedom that you taught so well and we will be secular, we will not renounce caricatures, illustrations, even if others step back", the president said in his address outside the Sorbonne University in Paris last Thursday.

According to Macron, the teacher was the victim of a "fatal conspiracy, of [an] amalgamation" of "hatred of the other".