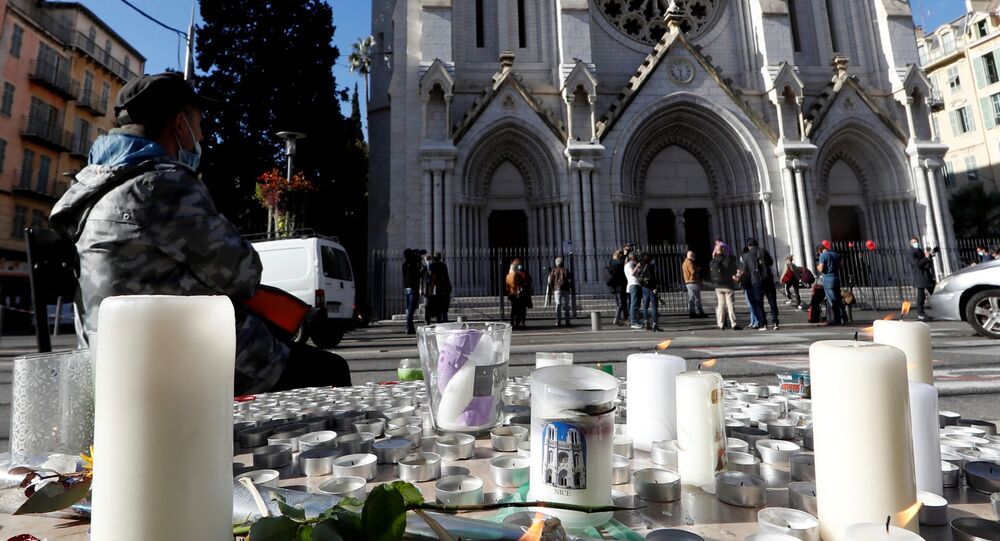 NICE (Sputnik), Anastasia Levchenko - The southern French city of Nice is mourning the deadly terrorist attack in its Notre-Dame church, with people bringing flowers to the site in sorrow mixed with anger and impatience to see some real action on the government's part.

On Thursday morning, a man armed with a knife attacked people in the Notre-Dame de Nice Basilica. The attacker managed to kill three people — including two by beheading, according to reports — before being seized by police. Nice Mayor Christian Estrosi said that the attacker continuously yelled "Allahu Akbar", which is an Islamic mantra in Arabic meaning "God is great". The French government designated it a terrorist attack.

The basement of the church is now abundantly covered with flowers and notes with prayers and captions reading "Never again".

Peter has lived in Nice for 10 years. He owns a shop nearby the Notre-Dame church and has been its frequent visitor himself.

"I came to lay flowers and to mourn. It's a terrible attack, I do not understand how anyone can attack people praying in a church", Peter told Sputnik. "I spoke to many Nice people yesterday, no one understands how such a thing could happen. They all say 'this is it, this is the limit, we can't tolerate it anymore".

Peter came despite the quarantine, specifying that he had a green light to leave home because he works in the area. He thinks that the incumbent government's response will in many ways be of far-going political significance.

"I think it can influence political choices here in Nice, but it depends very much on what [French President Emmanuel] Macron does. If he responds well, he can be reelected, if not, it will be the National Front [far-right political party led by Marine Le Pen]. But people will be judging [him] not by his statements, but by what he really does", Peter said.

A nun was praying nearby. She said she came in the early morning, "to pray not only for ourselves but for the whole population".

© REUTERS / ERIC GAILLARD
A nun prays in front of candles and flowers left in tribute to the victims of a deadly knife attack at the Notre Dame church in Nice, France, October 30, 2020.

Macron arrived in Nice almost immediately after the attack took place. He vowed to reinforce security provisions in places of worship and mobilise additional troops for the Sentinelle counterterrorist operation.

​The French president has faced some strong-worded criticism by many in Muslim nations over the past two weeks after he declared an intention to fight radical Islamists and build what he described as "enlightened Islam" in France. This happened after a gruesome attack on a French teacher in Paris on October 16.

Samuel Paty was beheaded by a teen Muslim who supposedly found it offensive that the teacher showed media-borne caricatures of Islamic prophet Muhammad during a freedom of speech lesson.