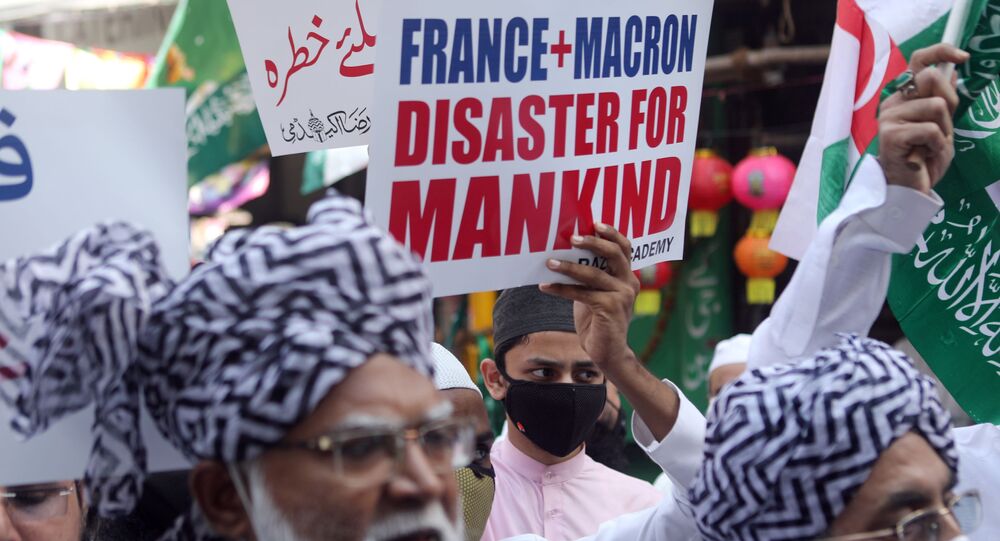 The Indian government has condemned the recent terrorist attacks in France, including the heinous assault in Nice inside a church. India stands with France in the fight against terrorism, Prime Minister Narendra Modi tweeted on Thursday.

Posters of French President Emmanuel Macron have been plastered on a road in a predominantly Muslim neighbourhood of Mumbai, in a show of protest against the French head of state by India's Muslim community for supporting the right to publish cartoons of the Prophet Muhammad.

​The posters on the Mumbai street surfaced as large sections of India's nearly 200 million Muslims joined their counterparts in several Islamic countries in denouncing the 42-year-old French president, who has categorically stated that France won't "renounce" the divisive cartoons.

On Thursday, a massive demonstration against Macron, organised in the central Indian city of Bhopal, was attended by thousands of Muslims. Demonstrations were also reported in several smaller Indian towns, including Aligarh in the northern state of Uttar Pradesh.

A protest against Emmanuel macron in bhopal was organised by Arif Masood, MLA of congress in MP.

Now Shivraj govt is going to take strict against the protests.

followers of islam, Indian muslims has a habit of breaking laws and religious intolerance#NiceTerrorAttack pic.twitter.com/KxaX72NrtM

In a statement blasting the Indian government for expressing solidarity with Macron, JuH's General Secretary Maulana Mahmood Madani said on Thursday that the French president's actions were "encouraging terrorism" in the guise of secularism.

"This attitude of the government of India reflects hostility towards Islam and Muslims. This will no doubt inflict hurt upon not only the 200 million Muslims of the country, but Muslims of the entire world as well secular minded people", said Madani.

India Stands With France Against Terrorism

India's Ministry of External Affairs (MEA) on Wednesday condemned the personal attacks against Macron, in an official statement directed against Turkey’s President Recep Tayyip Erdogan, who had called for Macron to undergo a "mental check".

In a tweet on Thursday evening, Prime Minister Narendra Modi joined other world leaders in condemning the terrorist attack in the French city of Nice, where a woman was reportedly beheaded in a church by a 21-year-old Muslim attacker. Macron described the incident as an "Islamist terrorist attack".

Indian Foreign Secretary Harsh Vardhan Shringla, who is on a visit to France, on Thursday also expressed "the solidarity of the Indian people with France in this fight against terrorism and radicalism".

© REUTERS / ERIC GAILLARD
Nice Attack: Terrorism Won't be Thwarted Until International Community Come Together, Observers Say
While PM Modi's solidarity tweet with Macron has been rather well-received among supporters of the governing Bharatiya Janata Party (BJP), it has failed to convince Muslims.

Besides the Indian PM, the French president has been supported by other global leaders such as US President Donald Trump and Russian President Vladimir Putin, who said they stand by France in the fight against terrorism.

The global row was triggered after a 47-year-old French teacher Samuel Paty was beheaded on 16 October in Conflans-Sainte-Honorine for showing caricatures of the Prophet Muhammad to his students. The cartoons are said to be the ones published by Charlie Hebdo in 2015.

In the aftermath of the incident, calls to boycott French goods and incitement to attacks against French expatriates have been reported from Muslim countries across the world.

In South Asia, a massive protest against Macron took place in Bangladesh's capital Dhaka earlier this week, while Pakistan's Prime Minister Imran Khan said in an open letter that the "collective trend" of Islamophobia in European countries must be countered.