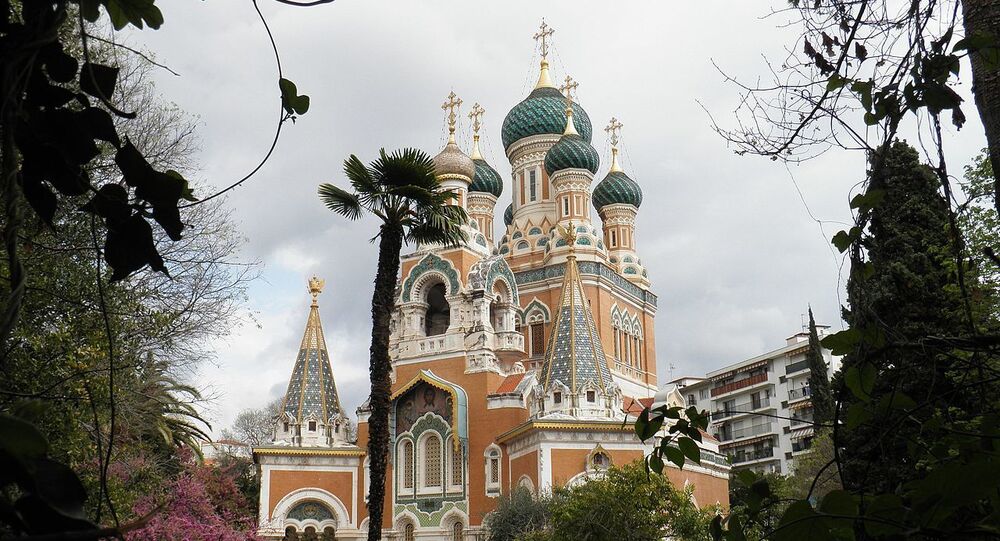 NICE, France (Sputnik), Anastasia Levchenko - It is hardly possible to provide complete security of religious buildings in France as the police are incapable of doing so, but new measures must be taken by the government in the wake of the recent church attack, the rector of the main Orthodox church in Nice, Archpriest Andrei Eliseev told Sputnik.

"We must understand what ideas the state will have for ensuring the safety of religious buildings. It is absolutely clear that it is impossible to completely create an atmosphere of security, the police do not have so many forces and capabilities, but I think that some solutions, even temporary ones, will be found and proposed by the authorities. So far, I can note that, unfortunately, for the big Christian holidays, police protection is not provided in Nice yet", Eliseev said.

The archpriest called the attack an assault on the French values and the manifestation of a lack of balance of tolerance and respect for each other in French society. He noted that French values include freedoms that are unacceptable from his point of view, such as the right to blaspheme or criticise a religious belief, symbol or dogma in an outrageous manner. According to Eliseev, cartoons of the founder of the Muslim religion, Muhammad, published by the satirical magazine Charlie Hebdo were clearly the result of such right and the lack of balance.

"The government needs to seriously think about how the country will live in the future because this applies not only to believers, it is not the first year that everyone is in danger – those who are going to attend Christmas fairs and other major social events related to Catholic or Christian holidays are in danger. Therefore, serious measures must be taken to keep people safe", Eliseev said.

According to the senior Orthodox priest, insufficient attention is being paid to already existing radical Islamic cells in France.

"Those who carry out such attacks do not represent the entire Muslim community. There are Chechen, Tunisian, and Moroccan communities of various denominations of Islam here; in general, they behave quite peacefully. I think that measures should be taken only against certain radical communities and movements that push young people to commit serious crimes", he said.

He believes that tougher measures could be taken by the French authorities against relatives and families of terrorists.

In addition, the whole EU policy of accepting a large number of migrants without providing them with decent work and living conditions results in the radicalisation of some newcomers, Eliseev noted.

"They do not know what to do here, many of them have no future, no work, they stay at home surfing the Internet and study the Koran in the interpretation of the most extreme imams. Before inviting such a huge number of people from Islamic countries, they need to be provided with normal conditions for life and work, for cultural development. We do not see this", he said.

The priest also commented on the decision by the mayor of Nice to close all churches in the city starting from 30 October.

"As for the mayor's decision to close the churches, this decision was dictated by the safety concern for parishioners, and we see it as completely legitimate and normal, this decision is temporary", Eliseev said.

On Thursday morning, three people were killed in a knife attack at the church in Nice. According to Nice Mayor Christian Estrosi, the assailant continued to shout "Allahu Akbar" even as he was being detained by police. French President Emmanuel Macron said that the incident was an Islamist terrorist attack, and the suspect is currently in police custody. The attack has been under investigation by the anti-terrorism department of the prosecutor's office.

Macron also said security provisions would be reinforced in all places of worship, particularly churches, and in schools in light of the attack. The number of troops of the Sentinelle counter-terrorist operation will be increased from 3,000 to 7,000.