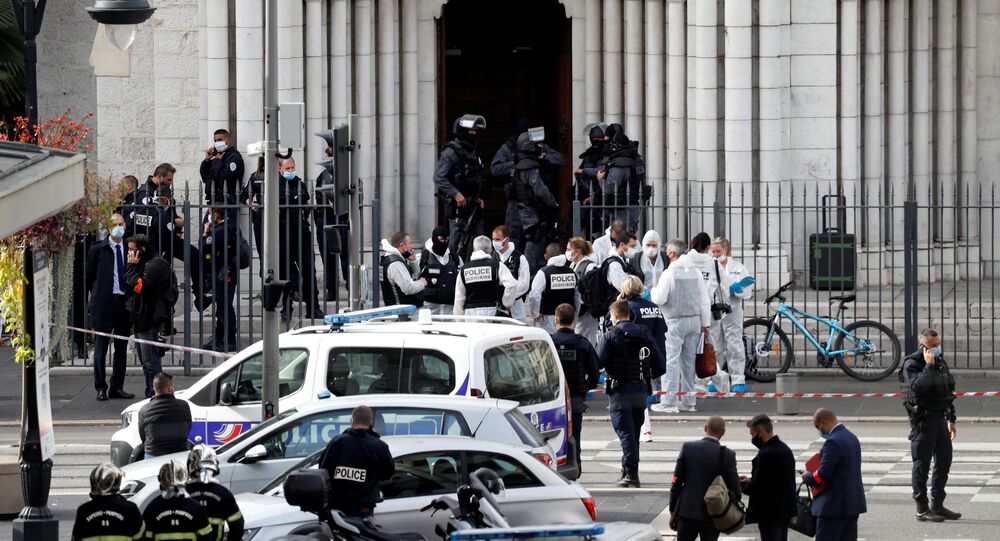 A Tunisian man armed with a knife killed three people at a cathedral in Nice, France on 29 October in an incident that has since been called "an Islamist terrorist attack".

A 47-year-old man is in police custody in Nice, suspected of having been in contact with the assailant the day before the knife attack, BFMTV reported.

According to BFMTV citing a police source, the man was detained on Thursday evening. There is no information about the identity of the detained man.

The report comes amid an inquiry launched by law enforcement to find out whether the attacker had accomplices.

© REUTERS / ERIC GAILLARD
'Cruel Crime', 'Horrible Tragedy' & 'Barbaric Attack': World Leaders on Deadly Stabbing in Nice, France
Late on 29 October, French anti-terrorism prosecutor Jean-Francois Ricard confirmed that the 21-year-old perpetrator of the deadly attack was originally from Tunisia and had arrived in France on 9 October. The prosecutor added that the attacker was not previously known to intelligence services.

On the morning of 29 October, three people were killed in a knife attack at a church in Nice. According to Nice Mayor Christian Estrosi, the assailant continued to shout "Allahu Akbar" even as he was detained by police. French President Emmanuel Macron called the incident "an Islamist terrorist attack", and noted that the suspect is currently in police custody.