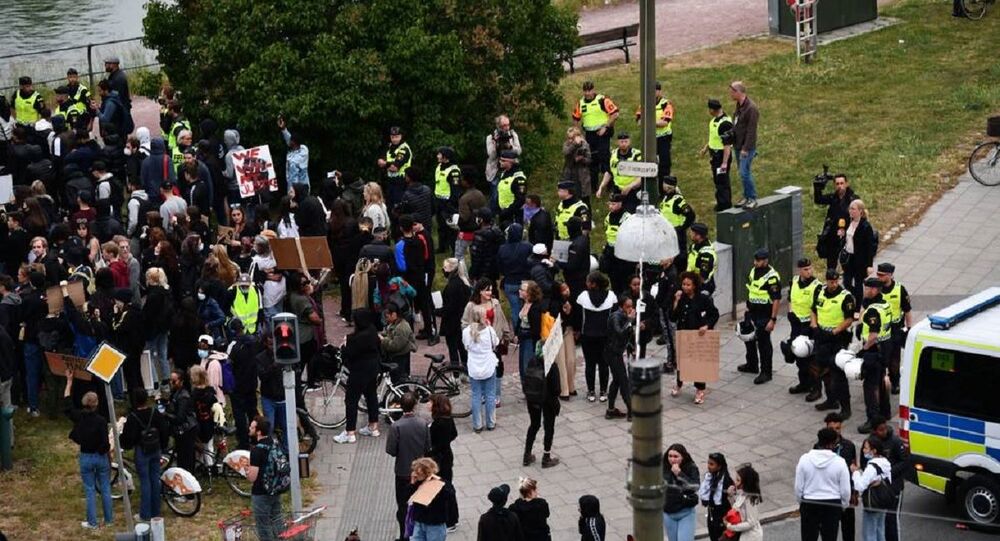 Despite restrictions of gatherings upward of 50 people and warnings from Sweden's state epidemiologist about the health risk associated with mass crowds amidst the COVID-19 epidemic, the demonstration in Malmö gathered over 1,000 participants.

This time, however, the police chose to engage in dialogue only and avoid interventions, in effect allowing the demonstration to continue, as the crowd paraded from Ribersborg toward the city centre.

Despite the fact that coronavirus-related restrictions don't allow crowds of over 50 people, over a thousand protesters gathered in Malmö, Sweden's third largest city, according to police estimates.

Demonstration in Malmö this evening without thinking of keeping distance at all😨😞#malmö #covid19 #photofrommyheart pic.twitter.com/M2WnfqevkF

According to national broadcaster SVT, the demonstration was initiated by an American living in Malmö. The protest was sparked by the death of 46-year-old Black American George Floyd, who died in the US in connection with a police intervention. His demise sparked massive protests across the globe, including in Scandinavia.

​The protesters went to the police station and stopped there. According to local sources, the protesters chanted “no police on our streets”.

Over 1000 demonstrators in solidarity with #USArevolts in #Malmö #sweden tonight.

They rallied to the Malmö police headquarters. The city is in a police state with all kind of cops released...#ICantBreath #BlackLivesMatter pic.twitter.com/W0HzRgR2UE

​Tweet: “The demo in Malmö has nothing to do with Black Lives Matter. It is aimed at Swedish police. The protesters chant 'No police on our streets'”.

Swedish state epidemiologist Anders Tegnell was critical of the fact that permission was given to hold a massive demonstration, as the Scandinavian nation is struggling with rising Covid-19 infections and fatalities.

“We know that this type of crowd is a risk, so they are inappropriate and illegal. There is a risk that we will increase the spread of infection afterwards,” Tegnell told SVT.

The warning, however, appears to have fallen on dead ears.

“If you see someone being killed, you forget about corona. I forget about the corona in these times, Malmö resident Kebe Amadou told the Finnish newspaper Hufvudstadsbladet. He emphasised that he is healthy and feels safe, and obviously wouldn't have come if he had symptoms.

“It is time to show that this is no longer tolerated. It's important for me to be here,” protester Zakaria Farah said.

A previous demonstration in Stockholm turned violent, as the police used teargas to disperse the crowd. Three security guards were injured during the demonstration in Stockholm, whereas several police officers applied for psycho-social support, the newspaper Aftonbladet reported. Among them were those present during the incident when a female police officer went down on her knees, held a placard “White silence is violence” and made a Black Power sign together with the crowd.

​Tweet: “First, people stand and scream 'Entire Sweden hates the police' in an illegal demonstration. When the police are about to disperse them, one female police officer kneels down in the middle of the crowd and holds up the sign 'white silence is violence' - and is given a tearful embrace when possibly armed. Brainwashing."

“It was a very special event that is still unclear. It emerged from a strong threat and an exposed situation to quieter scenes and a completely controlled situation,” Deputy Police Commissioner Carolina Paasikivi commented.

A group of black protesters was also filmed chanting “Stockholm is ours” near the House of Parliament.

By contrast, Norwegian authorities stopped planned demonstrations supporting the US protesters and condemning police brutality, which had been planned in Oslo, Bergen and Trondheim, because of the coronavirus epidemic. There is also a limit on gatherings of more than 50 people in Norway.

So far, the ripple from the Black Lives Matter demonstrations has gone across entire Europe, culminating in London and Paris.