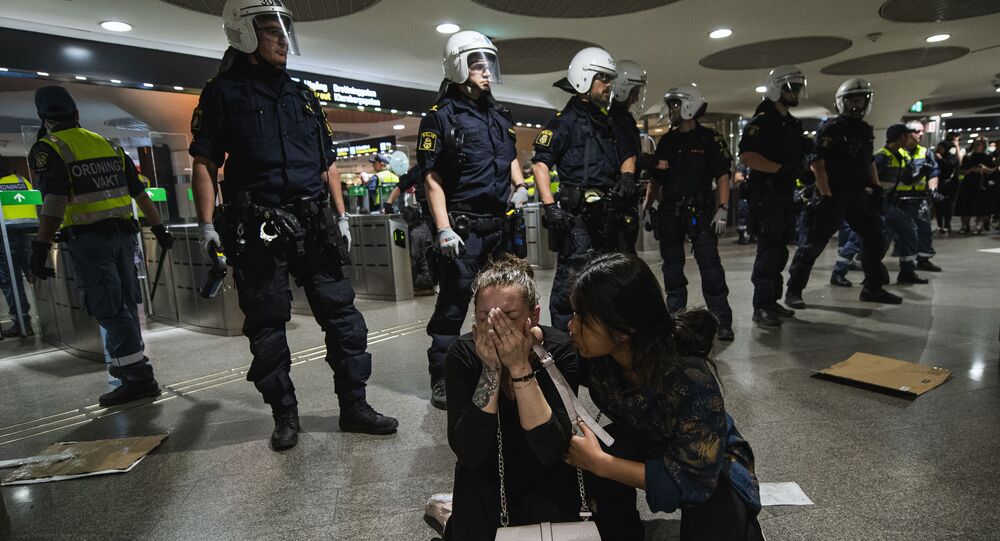 Anti-racist protests in support of the Black Lives Matter movement were held simultaneously in two Nordic capitals yielded dramatically different outcomes. While the demonstration in Helsinki wrapped up peacefully, Stockholm police had to use teargas.

Thousands of protestors gathered at Helsinki's Senate Square on Wednesday evening to demonstrate against racism and police brutality against blacks, inspired by the protests over the death of African-American George Floyd that have gripped the US.

The protests gathered people of all ages and backgrounds, including speakers from local activist groups, academics, entrepreneurs, and artists. At the start of the protest, those present were invited to take a knee, in solidarity with protesters in the US. Speeches discussed those killed by police in the US, the importance of dismantling white supremacy, as well as racism in Finland and beyond.

A few photos from the #BlackLivesMatter rally in #Helsinki today - got some really strong interviews and we'll have a story at @NewsNowFinland just as soon as I get home and write it! 🇫🇮 pic.twitter.com/w9rDwnE0kL

​The organisers described the demonstration as a declaration of solidarity with the popular movement Black Lives Matter. One of the speakers, artist and activist Sasha Huber, stressed that the problem is not limited to the United States.

“What is happening today is a return to colonialism and people have had enough. Racism is a problem all over the world and something that has worried me almost all my life,” Huber said.

The message in #Helsinki is heard loud and clear and peacefully: #BlackLivesMatter pic.twitter.com/r7CjO2qiTt

​Janne Korhonen, Senior Constable at the Helsinki Police, estimated the crowd at up to 3,000 participants, far above the government's coronavirus-related limit of 500-person gatherings, and stressed the dangers of holding mass demonstrations in the midst of the pandemic.

“It is a tricky situation and it would be very difficult to prevent this demonstration. We are now in this situation and we obviously hope that the virus does not spread here, but if it does, there is not much to do about it,” Korhonen told Hufvudstadsbladet.

​In Stockholm, a similar demonstration took a more dramatic turn. The protesters, numbering in the hundreds, gathered on Sergel Square, also breaking the limit of no more than 50 people per group set by the Swedish government.

“Already shortly after 17 o'clock there were a lot of people there, so the 50 people limit was exceeded very early,” police spokesman Mats Eriksson said. He said the organisers urged the participants to leave the site because of the restrictions, “but they didn't obey”. All in all, he estimated that over 1,000 people gathered.

​However, the “peaceful” Black Lives Matter demonstration quickly degenerated into hateful slogans against the police and several parliamentary parties. Protesters shouted “F**k the police” and held ACAB signs (“All cops are bastards"). They also urged the cops to kneel. At least one female police officer, surrounded by the crowd, obeyed, while holding a placard “White silence is violence”.

​Tweet: “A police officer chooses to kneel down and submit to the protesters who just expressed that they hate all of her colleagues”.

Later, chaotic scenes erupted, as police wearing protective gear and armed with batons clashed with protesters in the metro. Teargas was also applied.

The #blacklivesmatter protest in stockholm is now ending in police violence. If you have any updates or are in place please contact me NOW! pic.twitter.com/xYV2KE8f2V

​Similar demonstrations promoting justice freedom and decrying racism were held in cities and towns around the world.

The US has been gripped by nationwide protests over the death of African-American George Floyd at the hands of police. The unrest, with numerous reports of shootings, looting and pillaging, came at a time when the US is struggling to stifle the COVID-19 outbreak as its worst-hit nation.