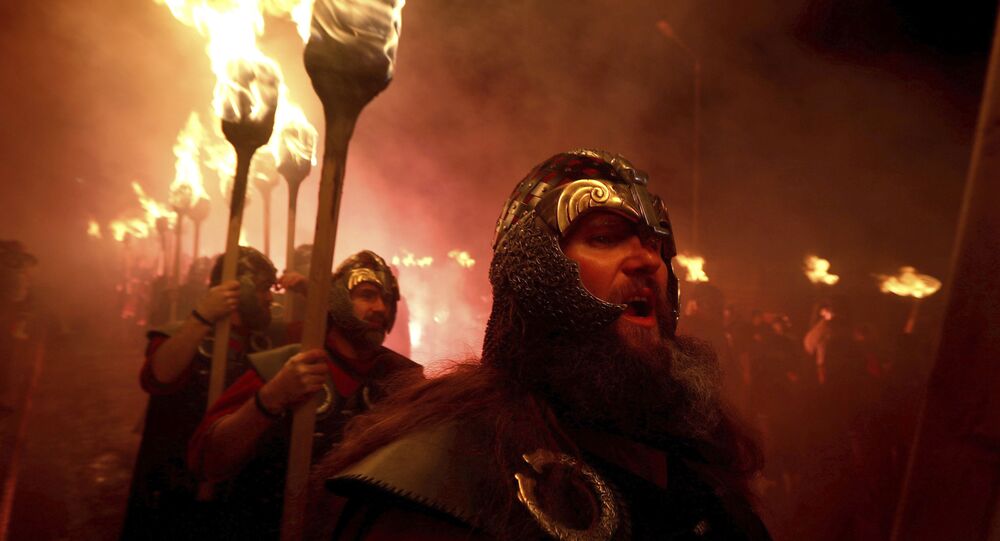 The trade route located high in the Norwegian mountains was used for shipping goods such as reindeer antlers and butter, as the Viking age was dubbed “small-scale globalisation”, but fell into disuse following the Black Death.

A Viking-era trade route that may have been used for hundreds years to traffic all sorts of goods has been discovered in Norway's Jotunheimen mountains, as ice patches continue to melt.

The first artefact hinting at the route's existence was a 1,700-year-old wool tunic likely worn by a Roman-era hypothermia victim and later found by hikers in 2011. Since then, over a hundred other items have been found, the magazine Science reported.

In the new study, a group of Norwegian archaeologists headed by Lars Pilø of the Department of Cultural Heritage in Lillehammer, have radiocarbon dated dozens of finds from the Jotunheimen mountains, focusing on the ice patch known and Lendbreen, which has been gradually receding. The oldest objects collected between 2011 and 2015 turned out to date back to the Bronze Age, between 1725 BC to 300 AD.

The Iron Age tunic from Lendbreen after conservation. It is the oldest preserved garment in Norway. Only a handful of such tunics are preserved north of the border to the Roman empire. It was published in the journal Antiquity in 2013 #glacialarchaeology #globalwarming #climatechange #archaeology #historical-textiles

Dozens of piled stone cairns marking the path from the valley below to the river nearby were identified, as was a shelter.

“It’s the first time we have a site like this in northern Europe”, a rejoicing Pilø told Science.

According to the radiocarbon dating, the mountain pass came into regular use around 300 AD. The trade was seasonal. In spring, cattle were herded to mountain meadows, whereas the autumn season mostly focused on reindeer antlers, hides, and animal fodder.

An Iron Age hunter repaired a broken arrow by splicing the two parts and wrapping the join with sinew. After all this effort, the arrow missed its target and was lost in the snow. We found it c. 1500 years later when it melted out at Svarthø (Black Hill) in Oppland, Norway pic.twitter.com/g998Ad11bo

​The traffic over Lendbreen peaked in the Viking Age, around 1000 BC, archaeologists estimated. The very same overpopulation and the scarcity of resources that pushed Viking-era Norsemen into faraway sea voyages also spurred them into exploring high mountains and other inhospitable domains.

“It may seem counter-intuitive, but high mountains sometimes did serve as major communications routes, instead of major barriers”, Cambridge University archaeologist and study co-author James Barrett explained. “It’s easy to travel at high elevations, once you get up there and there’s snow on the ground”.

The number of arrows recovered from the melting ice in Oppland, Norway, is now nearing 200. Based on the number of arrows, the most intense hunting happened during the Viking Age. This arrow, found in 2018, was lost at that time #glacialarchaeology pic.twitter.com/8XyFIBzD5V

​The pass was described as a vital link connecting Norway to a broader contemporary trade network. As historical records suggest, butter was a major export from Norway to England.

“The Viking age is one of small-scale globalisation: They’re sourcing raw materials from all over", Danish Aarhus University archaeologist Søren Michael Sindbæk, who was not involved with the work, commented. “This is the first site where we have good chronology and the finds to illustrate that”.

The number of finds fell off a cliff around 1400 AD, coinciding with the advent of the Black Death, which almost halved Norway's population and, coupled with the following century-long Little Ice Age, eradicated pan-European trade. Crushed by plague, depopulation, and economic decline, the trade route fell into oblivion, only to be rediscovered in our era.