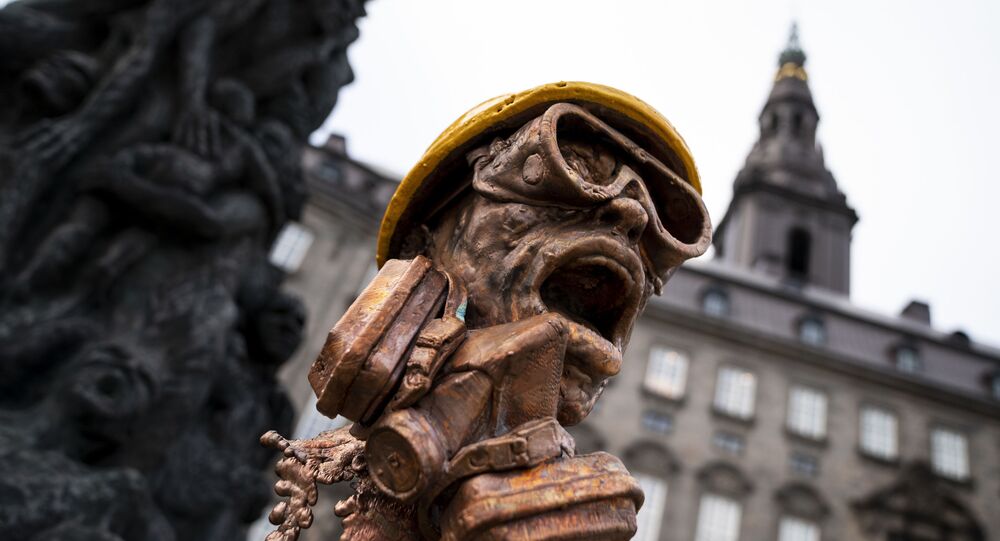 The Chinese Embassy called the eight-metre-tall statue, titled the Pillar of Shame, “misleading about the factual situation in Hong Kong” and detrimental to the relations between the countries.

Danish-Chinese relations, already damaged by spying allegations and a recent cartoon scandal, appear to have reached a new low following the erection of a statue in support of the Hong Kong protests against China's government outside of the Danish parliament in Copenhagen.

The eight-metre tall “Pillar of Shame” erected on the Parliament Square opposite Christiansborg was made by Danish artist Jens Galschiøt in “moral support” of the protesters.

According to the newspaper Jyllands-Posten, the statue made the Chinese Embassy see red. The embassy called Galschiøt's work “misleading about the factual situation in Hong Kong” and tantamount to “interference with internal Chinese conditions”.

© AFP 2019 / LISELOTTE SABROE
Danish artist Jens Galschiot (L) works in front of the Danish Parliament Folketinget at Christiansborg Palace Square in Copenhagen, where he erected an 8-meter-high Pillar of Shame in solidarity with the protesters in Hong Kong on January 23, 2020

​Furthermore, the embassy suggested that the statue would be “detrimental to Danish-Chinese relations and the friendly relationship between the Chinese and Danish peoples”, adding that Chinese tourists would find the sculpture “particularly offensive” as well as that it might pose “a security risk”.

According to Jyllands-Posten, the embassy contacted Copenhagen Municipality the day before the statue was erected suggesting that they withdraw the permit, which has been granted until April 2021.

Pillar of Shame erected in Denmark in solidarity with Hong Kong's democracy movement: An eight-meter-high sculpture with distorted bodies has been raised on January 23rd in front of the Danish Parliament in solidarity with Hong Kong protesters The sculpture is made by the Danish artist Jens Galschiøt, and it is erected in collaboration between Galschiøt, the green political party The Alternative and Amnesty International Denmark. A group of parties in the Danish Parliament supports the art manifestation: Inuit Ataqatigiit (IA), SF, Enhedslisten and Fremad. “Hong Kong citizens only have a chance of preserving freedom of expression and the right of peaceful assembly if they are backed by us in the West. Also, if it is only moral support. I have talked to activists in the democracy movement and I know this kind of support is crucial to them,” says Jens Galschiøt. #DenmarkStandsWithHongkong #freehk #freehongkong #hongkong #jensgalschiøt #galshiot #galschiøt #supporthongkong #standwithhongkong #art #skulpture #amnestyinternational #amnesty

“It's amazing how they thought they could throw their weight around in matters concerning our government”, Kjærsgaard said.

Social Democrat Foreign Minister Jeppe Kofod said the embassy “naturally” had the right to an opinion, but emphasised that it mustn't result in “a praxis contrary to Danish law”.

© AFP 2019 / ODD ANDERSEN
Police Looking for Clues as Copenhagen's Little Mermaid Vandalised With 'Free Hong Kong' Graffiti
In late January, the very same Jyllands-Posten sparked a controversy by posting a cartoon depicting China's flag with coronaviruses instead of the yellow stars to mark the deadly epidemic in the Chinese city of Wuhan, which the country's embassy found offensive to the entire Chinese nation.

Hong Kong has seen unrelenting protests since June. While the demonstrations were initially a response to an unpopular extradition bill, they continued even after the bill was withdrawn in October, and later turned violent. Beijing sees the situation in Hong Kong as the result of foreign interference in China's domestic affairs.