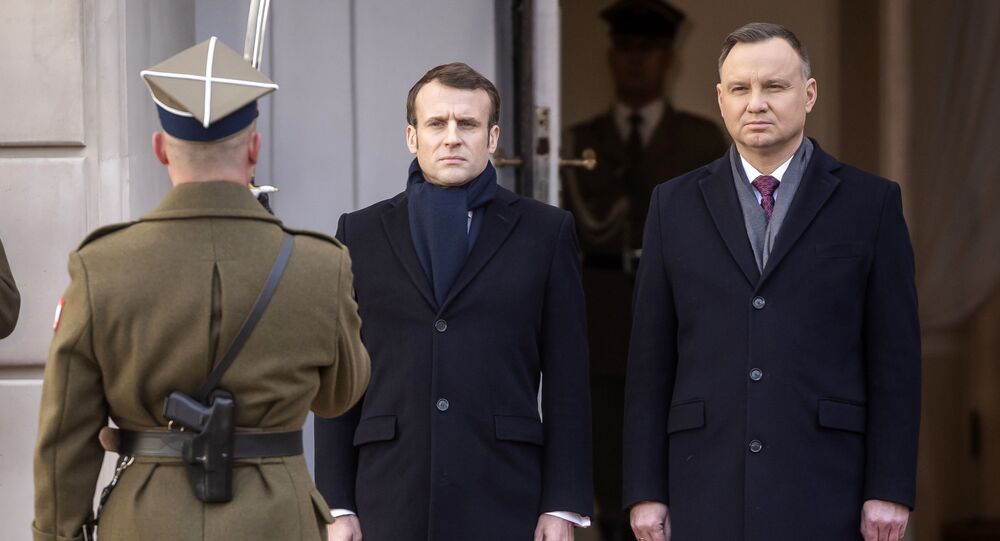 Macron’s visit to Warsaw, the first by a French head of state in six years, takes place against the backdrop of uneasiness between the EU and Poland over its judicial reforms. Poland’s decision to buy F-15 fighters made by Lockheed Martin is also said to have been another blow against Paris amid its attempts to boost European military cooperation.

French President Emmanuel Macron defined France as being neither pro-Russia nor anti-Russia, but pro-European, as he spoke during his first state visit to Poland, calling for the EU to be firm with Moscow.

"We need to be demanding in our political dialogue with Russia", Macron said.

The French head of state, who met with the country’s President Andrzej Duda and Prime Minister Mateusz Morawiecki, expressed hope that the people of Poland could trust Europe to protect them in case of an attack.

“I'll be happy the day Polish people can tell each other: 'The day I'm attacked, I know Europe can protect us'. Because that day, the sense of European belonging will be indestructible", he said, going on to voice his commitment to NATO despite promoting the idea of a joint European military: "European defence is not an alternative to NATO, it's an indispensable complement".

On his part, the Polish president backed Macron’s efforts to increase military cooperation in Europe, signalling that Warsaw wants to participate in a European tank project.

"We are going to talk about our participation in the project to build a European tank. We would like to take part in this project", Duda said as he accepted the French president on his state visit, during which the two countries are to discuss defence and energy cooperation.

Duda, who noted that Macron’s visit signifies "deep interest in our part of Europe and its affairs", also noted that the UK’s departure from the EU should prompt a remake of the bloc’s architecture and that "France's role after Brexit will increase a lot".

Attempt to Patch Up Relations?

Macron brought a delegation with him to Warsaw, including the ministers of economy and finance, of the armed forces, and of ecological transition, to clarify his country’s position “on misunderstandings, tension, and worries”, as Bloomberg reports, citing an unnamed French official.

Relations between the two countries have reportedly been strained by Macron’s criticism of Warsaw’s political reforms as well as the country’s rejection of a helicopter deal with Airbus in favour of a $3.5 billion contract with the US giant Lockheed Martin.

According to the outlet, the visit is a part of the French president’s plan to strengthen the bloc following Brexit and Germany’s declining role as a force for integration within the EU. The effort may also include meeting Hungarian Prime Minister Viktor Orban, who also opposes the EU’s migration policy.

Although Warsaw and Paris have found common ground concerning the establishment of a digital tax and a European car-battery industry, as well as fighting tax fraud, the EU’s climate change and migration policies face opposition in Poland.

© Sputnik / Anton Denisov
EU Human Rights Commissioner Slams Poland Over Legal Reform and Abortion, But Will Warsaw Care?
Macron’s inclination for dialog with Moscow along with criticism of NATO, including his infamous remark about the alliance being “brain dead”, also go against Warsaw’s support for the US. At the same time, Warsaw is positive about Macron’s proposed “European Intervention Initiative”, which is supposed to keep the UK engaged in the bloc’s defence, despite leaving the union.
...
Reddit
Google+
Blogger
Pinterest
StumbleUpon
Telegram
WhatsApp
138