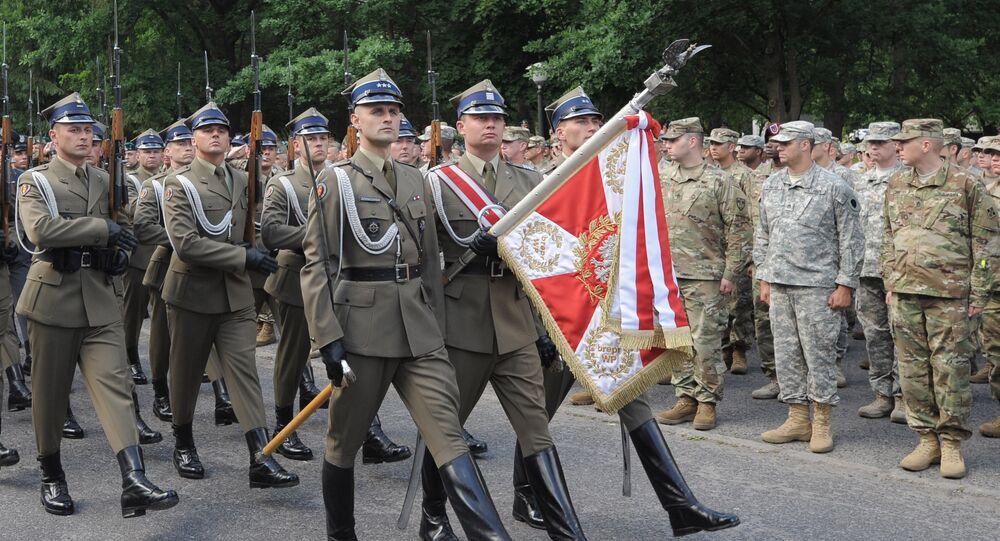 French President Emmanuel Macron has sparked a continental debate after calling for the creation of a pan-European army to defend against Russia, China and even the United States. Speaking to Sputnik, Krzysztof Podgorski, a Polish political and military observer, explained why the proposal, while an interesting one, is Western European-centric.

Speaking ahead of Remembrance Day commemorations last week, French President Macron announced that Europe needs a "real army" to reduce the continent's military dependence on the United States, and to strengthen continental defence against would-be aggressors.

Speaking to Sputnik about the idea, author, journalist and Sputnik Poland contributor Krzysztof Podgorski began by pointing out that Macron's initiative was nothing new. "This is not a new initiative. It appeared several years ago, and has two of the European Union's main states – France and Germany, behind it. This is how the so-called Eurocorps initiative was formed," the observer explained, referring to the experimental ten-state military corps created in Strasbourg, France in 2009.

© REUTERS / Kevin Lamarque
Macron: Being US Ally Does Not Mean Being Vassal State
According to Podgorski, Macron merely "gave new life to ideas which enjoyed support among the elites of the leading nations of the European Union, particularly the so-called old EU," i.e. the union before its expansion to Central and Eastern Europe starting in the late 1990s.

"President Putin has characterised the European Army idea as an element of a strengthened multi-polar world, and, perhaps, a necessity for the protection of the European Union's interests," the analyst noted.

At the same time, Podgorski does not believe that the initiative is directed against the US, in spite of back-and-forth rhetoric between Macron and US President Donald Trump. "[Macron] spoke more broadly about the need to protect Europe from Russia, China and the US. This is about the concept of protecting the EU's interests, including militarily, within the framework of a changing global geopolitical architecture."

Trump has described the European Army idea as "very insulting," and suggested that "perhaps Europe should first pay its fair share of NATO, which the US subsidises greatly" before moving forward with plans for a continental defence force.

Commenting on the apparent rift between the French and US presidents, Podgorski suggested that it's "hard to keep up with Trump and his Twitter diplomacy", and questionable whether the US president's public rhetoric matches up with what is said behind closed doors.

"After the tweets, Macron and Trump met, and the statements of both leaders were 'neutralised.' There is no confrontation between the leaders of France and the US. As for Russia, it is simply being consistent. This idea of liquidating a unipolar world order in which the US plays a dominant role in the interests of multi-polarity first appeared in the heads of Russian diplomats, and has been pushed for several years."

According to Podgorski, even though the possibility of a European military alliance is provided for by the Lisbon Treaty, it isn't very likely to come to fruition given divergent interests between the EU's founding states and the newcomers from the East. "Decisions on such issues are taken unanimously. The so-called New Union, i.e. the countries that joined the EU over the past several years, including Poland, aren't particularly enthusiastic about deepening defence cooperation, seeing it as competition for NATO."

© AP Photo / Ronald Zak
Neutral Austria Says No to Participation in EU Army as NATO Rift Deepens
In Poland, the analyst stressed, all of the country's major political currents support NATO as the foundation for Warsaw's national security. "Poland, Romania, Lithuania, Latvia, Estonia, Slovakia, Hungary – it's no use expecting these countries to support the French European army idea," he said.

Asked, in light of this, whether the European Army initiative is a realistic possibility or just a pipedream hatched in the minds of French politicians, Podgorski suggested that more than anything, it reveals the increasingly complex political realities in the EU and the world in general.

"The world is not black and white, but is made up of multiple shades of grey. This is how the French concept should be seen. In the economic space, we already have the so-called 'multi-speed Europe', imposed by Germany and France, and the expansion of the euro zone. Similarly, defence policy too can go in two directions simultaneously. There will be countries that will integrate, that will allocate units for the Eurocorps, and take part in the creation of the European army. At the same time, there will perhaps be countries which will not join in the idea, such as Poland and Romania," the observer concluded.