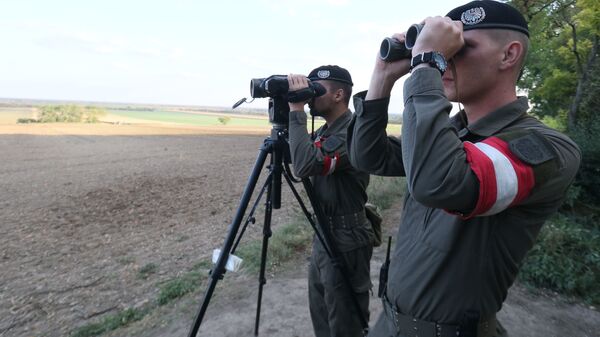 © AP Photo / Ronald Zak
Subscribe
International
India
Africa
Although France’s Emmanuel Macron and Germany’s Angela Merkel are calling on their EU allies to unite and create a joint European army, Austria, which isn't a member of NATO, has voiced that it would opt out.

Austrian Defence Minister Mario Kunasek’s office has told the local outlet Kurier that they “have no grounds to evaluate this plan."
According to the ministry’s spokesperson, the idea of a European army conflicts with the country’s constitution, as Austria is neutral. The press service called participation in a joint military "illusory," the Kurier reports. The minister’s office emphasized that the idea of the EU Commission President commanding its deployment is absolutely incompatible with neutrality.

In early November, French President Emmanuel Macron called for creating a European army that would be independent of the US. Macron, who had already voiced the idea in June, spoke of Europe facing threats allegedly coming from China, Russia, and the United States.

The German Chancellor has backed his proposal, stressing recently that "Europe must take its fate in its own hands." She also proposed the establishment of a "European security council" in order to coordinate the process. According to her, it could be a "good supplement to NATO."

While the European Commission expressed their delight that both Paris and Berlin publicly supported the idea, the perspective infuriated the US president. Donald Trump said it was very insulting of the French President and noted that Europe "should first pay its fair share of NATO, which the US subsidizes greatly."

Turkey's ruling Justice and Development (AK) Party called the idea of a pan-European army an indication that NATO is currently showing signs of splitting, according to the Turkish news agency Anadolu.

"Three or five years ago this would have been unthinkable. It clearly shows an emerging crack in the transatlantic alliance," he said, adding that the possible EU army isn't likely to become an alternative to NATO.

The idea of a single EU army has been floated for at least several years. Since 2013, Berlin has overseen efforts towards closer EU defence integration through the Framework Nations Concept, which envisages that Germany should share its troops and capabilities with other European countries.