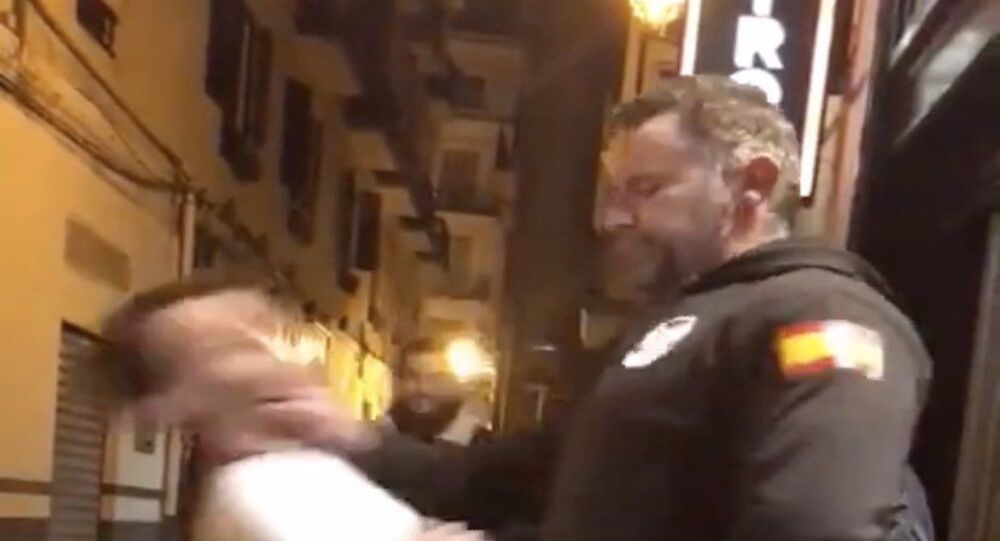 A skinny Spanish party-goer decided to drunkenly mess around with a beefy bouncer in the middle of the street in Spain. The altercation did not end well for the man as he was sent to the floor with a single slap.

A video showing a cocky clubber being sent flying after a single slap in the face by a Spanish bouncer emerged on Thursday.

The footage shows the skinny man teasing the much-larger bouncer, who is decked out in a uniform and a Spanish flag, grabbing at him outside the Theatro Club in Malaga, Spain.

The drunken man taunts the bouncer as onlookers look on in shock.

The bouncer appears to try and reason with him but the drunken man just dances more insultingly.

He slowly moves closer and puts his finger on the bouncer, whose patience has clearly run out.

As the man continued to dance around and bother him, the bouncer finally reacts by pushing him and then slapping him in the face sending him clattering to the floor.

The sound echoes throughout the street as the man falls onto his side over a grate where he lays with his head moving up and down.

He lies on the ground with his head moving back and forth slightly.

The video was posted to Instagram where netizens responded in kind.

You mess with the bull, you get the horns. 👋🏻😵 pic.twitter.com/obBtEQdVzR

Users did not seem particularly sympathetic to the man.

Others commented on the absurdity of trying to take on a man much larger than himself.

Damn the bouncer knocked his astral projection right out of him 😭😭😭😭😭 pic.twitter.com/uTUaJGfgRy

There was some expression of support for the man however, saying the bouncer should know better.

As funny as this is. You would think the bouncer would have a little more consideration for the little guy who clearly cant hold his liquor.....Harsh reaction..

Death Toll From Bad Weather in Spain Rises to 13 People