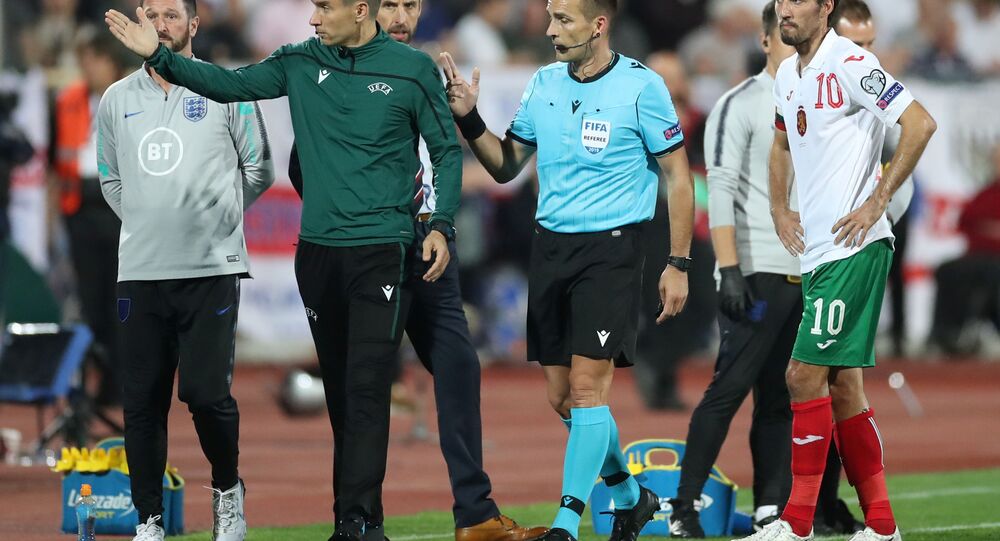 The Bulgaria vs England Euro 2020 qualifier match in Sofia on Monday saw English players receive racist abuse from Bulgarian fans. The fallout from the match has led to the highlighting of racism by the UEFA disciplinary body, which has opened investigations into both teams, as well as the resignation of the Bulgarian Football Union president.

Six Bulgarian football fans were arrested in Sofia on Wednesday for the racial abuse of England players at the Euro 2020 qualifier on Monday, the Sun reports.

A spokesman for Bulgaria's Ministry of Interior confirmed that 15 suspects have been identified and "six of them have been detained and three are wanted, two have been summoned and are expected to report to the police to testify."

"Work is underway to gather evidence for the other six. The materials will be reported to the Sofia District Prosecutor's Office," he added.

A photo was released by the Bulgarian police showing four of the detained suspects after their arrest lined up against a wall with their backs turned.

4 Bulgarian football fans have been arrested following the racist abuse towards England players on Monday. pic.twitter.com/CC3XS9QPml

​The arrest comes as part of an ongoing crackdown on fans accused of racially abusing England players.

Bulgaria's head coach Krasimir Balakov apologised on Wednesday to "all those who feel hurt" by the crowds activity during game which he described as "one of the most appalling nights I've seen in football."

He took it upon himself as the coach of the Bulgarian National Team to apologise and strongly condemned and reject racism "as a norm of conduct."

The comments from Balakov differ signficantly from Bulgarian goalkeeper Plamen Iliev who said on Tuesday that England players "overreacted" to the Bulgarian crowd's Nazi salutes and monkey chants, insisting that the Bulgarian crowd at The Levski Stadium "behaved well throughout the game."

"There wasn't any abuse as far as I could hear and I think they [the England players] overreacted a bit. The public was on a good level – I didn't hear any bad language used towards their or our players."

These comments follow the resignation of Bulgarian Football Union president Borislav Mihaylov, who stepped down under pressure from Prime Minister Boyko Borissov who called upon him to quit and threatened to end "any relationship with BFU, including financial" until Mihaylov withdrew from his position. The decision was praised by England star Raheem Stirling, who scored two goals during the match.

The cause of the trouble has been pinned on the Lauta Army, a Bulgarian hooligan group which has a tendency to enter into clashes and violence with other football ultra groups.

It was the Lokomotiv Lauta Army that was causing all the bother in the ground. Just standard far-right wankers out to cause trouble. but just remember they don't represent most Bulgarian fans.#BULvENG pic.twitter.com/ITkO8aaUsv

​The UEFA Control, Ethics and Disciplinary Body has opened disciplinary proceedings against both Bulgaria and England with Bulgaria which could potentially see a full ground closure and a fine of around £70,000.

The Three Lions are being charged with disrupting the national anthem, as well as not providing a sufficient number of traveling stewards.

We can confirm that @England players were subjected to abhorrent racist chanting while playing in the #EURO2020 qualifier against Bulgaria.

This is unacceptable at any level of the game and our immediate focus is supporting the players and staff involved.

​The England's players were subjected to racist abuse from Bulgarian fans, pulling Nazi salutes as well as monkey noises directed at black players during the game, which was twice halted due to the actions of the home crowd.

The game, which also served as the debut of Tyrone Mings on the England team, was first stopped by England captain Harry Kane 25 minutes in when Raheem Sterling was brought down for a free kick, seeing gestures and taunts from the crowd.

It was stopped a second time after Bulgarian fans carrying a Lauta Army flag and decked in black had to be removed from the stadium. The referee then threatened to cancel the game if the poor behaviour continued.

The match ultimately ended in a 6 - 0 England victory.

​According to the Telegraph, racist behaviour was to be expected from the Bulgarian crowd and England players warned in advance that they planned to leave the pitch if they were subject to racial abuse.

The Vasil Levski Stadium in Sofia was already under a partial closure after Bulgaria were sanctioned for racist behaviour in previous Euro 2020 qualifier matches against Kosovo and the Czech Republic.