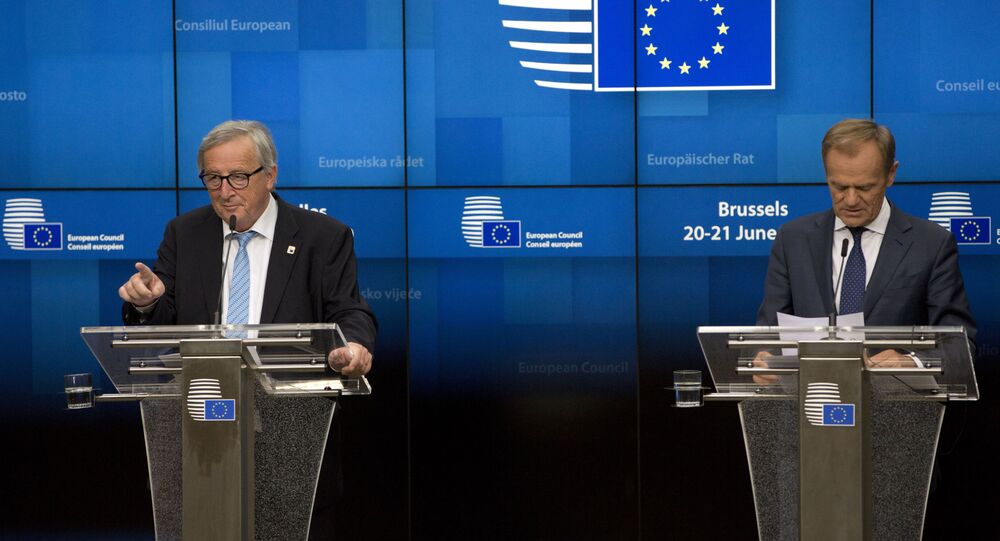 BRUSSELS (Sputnik) - After hours-long horse trading at the two-day EU summit in Brussels, European leaders have still failed to come to a consensus on who should take the top jobs in the bloc following the May elections, with the meeting being also marred by lack of unanimity on the 2050 carbon neutrality goal.

The summit, which opened on Thursday, had a strong agenda, such as Russia sanctions, Turkey, climate change, global security and other issues. Yet the main point was to discuss those best equipped to take over senior posts in the European Commission, European Council and European Parliament.

In the early hours of Friday, European Council President Donald Tusk finally said: "There was no majority on any candidate ... [The council] will meet again on the 30th of June."

The most important position up for grabs is the replacement of Jean-Claude Juncker, the head of the European Commission. Manfred Weber, a member of the Christian Social Union in Bavaria, is still defended by Germany while the other countries still say no. Berlin may be raising the stakes to get another candidate, but still a Christian Democrat.

French President Emmanuel Macron, meanwhile, wants to see at the helm a Liberal and preferably a woman, Competition Commissioner Margrethe Vestager. He, however, says that he has several proposals to make. The Social Democrats stick to their candidate — Frans Timmermans, the first vice-president of the present commission.

Whether the EU nations will agree on three main names by 30 June is still an open question.

At the final press conference on Friday, Tusk said: "Sometimes I feel that the [nomination] process is too transparent to be effective. I have the impression that the public knows more about the candidates than me. I have nothing new to communicate."

If No Unity ob Names, What Else?

Deferring the nomination issues to the next summit, the European Council adopted the EU's strategic agenda for 2019-2024, outlining its main goals in five general statements that are still to be filled in terms of substance.

What concerns the budget for the next five years, no final decision has been made yet.

"The European Council welcomed the work done under the Romanian Presidency and took note of the various elements of the MFF [Multiannual Financial Framework] package. It called on Finland's Presidency to pursue the work and to develop the Negotiating Box. On that basis the European Council will hold an exchange of views in October 2019, aiming for an agreement before the end of the year," an official statement said.

The decision was therefore delayed until fall.

Leaders then proceeded with discussing climate, disinformation, the long-term EU budget and international relations, including Russia and Turkey.

On climate, which has been recently defined as an absolute emergency by a number of activists across Europe, the summit failed to reach unanimity on a commitment to climate neutrality by 2050.

Poland and other nations opposed the goal, explaining their stance by the need to protect businesses and relieve their citizens of an additional tax burden.

"A vast majority of member states has committed to climate neutrality by 2050. But reaching unanimity was not possible today," Tusk told the press conference.

In other words, nothing was decided.

As for Ukraine, Merkel and Macron briefed the leaders on the implementation of the Minsk agreements. They also urged Moscow to release the sailors from Ukrainian naval ships arrested for illegally crossing the Russian maritime border in the Kerch Strait back in November.

EU leaders then unanimously agreed to extend economic sanctions on Russia for another six months and called for urgent implementation of the Minsk agreements on the Donbas conflict.

In addition, the European Council declared that "it stands ready to consider further options, including non-recognition of Russian passports issued in contradiction to the Minsk agreements, to citizens living in Eastern Ukraine."

As part of international agenda, the summit also reprimanded Turkey for oil and gas drilling off the coast of Cyprus, with Juncker saying that the commission had been tasked with introducing "not soft" measures against Ankara.

Finally, the bloc reiterated that disinformation could not be tolerated and that cyberattacks must be countered.

On Friday, the EU leaders also discussed Brexit. They, however, have nothing much to say until new Conservative Party leader is elected to replace outgoing Prime Minister Theresa May, who had to leave her post over the bloc’s intransigence to make concessions amid the deadlock in the UK parliament.

At the press conference, Juncker felt obliged to reiterate that "the withdrawal agreement is not open for renegotiations" in a clear warning to Boris Johnson, a potential successor to May, that he will face a wall if he asks for renegotiation.

Other key topics on the agenda were the euro, or "deepening of the economic and monetary union," and trade.

European Central Bank President Mario Draghi, in particular, presented risks for world trade over geopolitical tensions. Tusk, in turn, expressed "hope that it would lead to fruitful discussions in Osaka [at the G20 summit] rather than quarrels" in an apparent reference to US President Donald Trump’s style of negotiations.