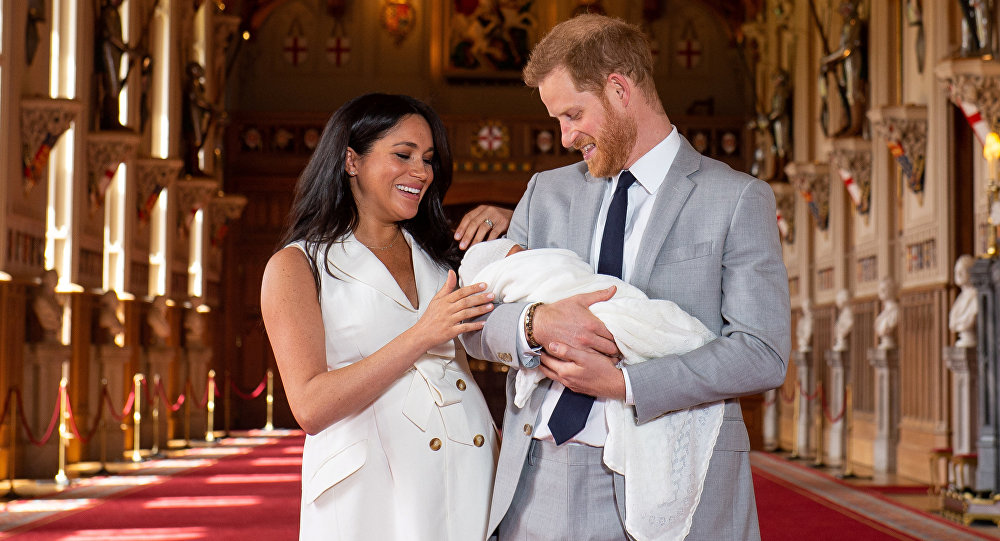 The Duke and Duchess of Sussex, Prince Harry and Meghan Markle, have become parents, welcoming their firstborn child, a son, early in the morning on 6 May. The baby boy’s name - Archie Harrison Mountbatten-Windsor - has provoked a variety of reactions on social media.

The Duke and Duchess of Sussex have revealed the name of their baby: Archie Harrison Mountbatten-Windsor, two days after his birth. It has generated a wide range of reactions, with many showing their love for the newest addition to the royal family online.

The Duke and Duchess of Sussex are pleased to announce they have named their first born child: Archie Harrison Mountbatten-Windsor This afternoon Their Royal Highnesses introduced Her Majesty The Queen to her eighth great-grandchild at Windsor Castle. The Duke of Edinburgh and The Duchess’ mother were also present for this special occasion. Photo credit: Chris Allerton ©️SussexRoyal

However, Good Morning Britain's host Piers Morgan tweeted his disappointment, chastising the royals for the acute lack of diversity of their choice. He took umbrage with the fact that the name Archie was one of the most popular white middle-class first names.

He also called it a "striking blow for diversity and feminism".

"I guess the point he's making is that he's Meghan's son and not just Harry's son," said John Campbell on TVNZ1's Breakfast Show.

So the royal couple, in a striking blow for diversity & feminism, have given their son one of the most popular white middle-class first names, Archie, and a second name, Harrison, that was chosen because it stands for 'Harry's son' (I'm serious..). Hilarious. pic.twitter.com/kV0ezcwNLc

​The Internet was abuzz with people rushing to offer their congratulations and warm wishes for Baby Archie and the parents.

Congratulations to Prince Harry and Meghan Markle on their royal baby!!! Baby Sussex was born on 5/7/2019 at 5:26am and weighed 7lbs 3oz!!! Sources say he may be named Earl of Dumbarton, but we’ll see later on! I loveeee itty bitty babies!!! 😍 pic.twitter.com/whZDJqO8Ll

A royal welcome for a royal baby. 👑 Congratulations to Meghan Markle, Duchess of Sussex, and Prince Harry on their baby boy!

Love,
Kate and Willie (the other royals) pic.twitter.com/YfSdRYUBQG

Reception would like to say a big congratulations to the Duke and Duchess of Sussex on the arrival of their baby boy! 👑 🍼 🎉 @RoyalFamily #royalbaby pic.twitter.com/0DUhQSNujF

​Others had more humorous take on the royal baby’s name.

Archies Are Having Strong Reactions to the Royal Baby&#39;s Name (It&#39;s Archie) https://t.co/yMd0R7HFhT

Reactions to the royal baby name are mixed…https://t.co/Gc7LgckiPk

So we just told Elizabeth the name of the new #RoyalBaby and this was her reaction…. 🤣🤣 pic.twitter.com/JwgHrGRxeC

​Many hoped that the new baby would have red hair like his father and another famous Archie.

Let's all just respect the power move of a ginger prince naming his son Archie. pic.twitter.com/K3V3n5M7Me

I'm going to laugh and laugh if Archie Harrison Mountbatten-Windsor has red hair and freckles.

​Somewhere out there, a baby named Veronica took one look at the pics of Archie Harrison Mountbatten-Windsor and said her first word: "endgame"

​Pretty much my exact reaction when hearing the Royals baby's name at Winghouse. pic.twitter.com/1JL1aLfPSJ

​As the name of the Duke and Duchess of Sussex's baby — Archie Harrison Mountbatten-Windsor was made public, it also appears to confirm the baby will not take a regal title, for the time-being at least.

The name was held so tightly under wraps that even senior members of the Royal Family were apparently unaware of Archie's name until just prior to the official announcement. The name is German in origin, and means 'truly brave'.

© AP Photo / Dominic Lipinski/Pool
'Truly Brave': UK Royal Baby's Name Announced, and It's Quite a Mouthful
Archie was not among the bookmakers' favourites of Alexander, Arthur and Albert.

Queen Elizabeth's grandson, 34-year-old Harry, and Meghan, aged 37, a US-born former actress, married in a lavish ceremony at the monarch's Windsor Castle in May last year; in January, Meghan Markle confirmed her pregnancy.

The newborn baby boy is the eighth great-grandchild of the 93-year-old queen, and could be entitled to hold joint British and American citizenship.