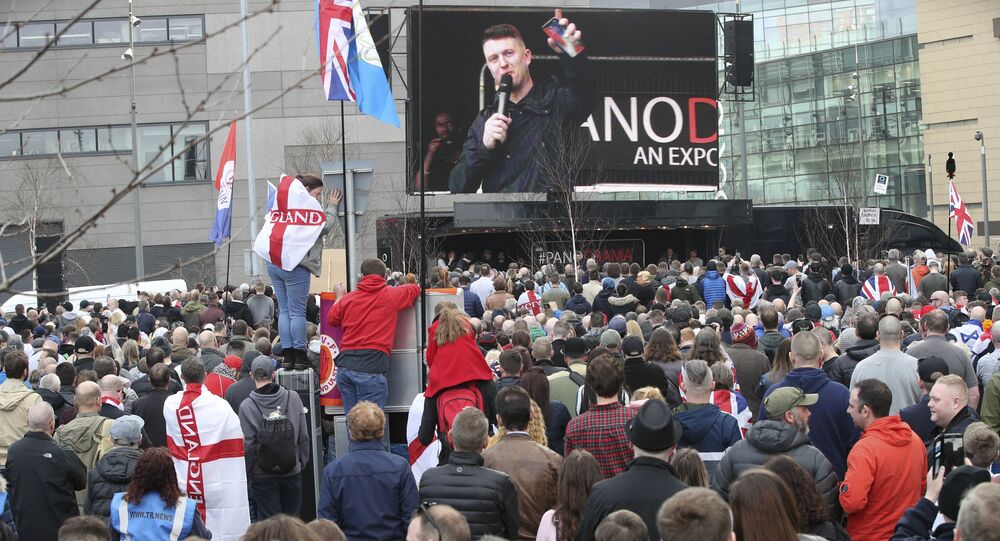 Although the UK was not supposed to take part in this year’s elections to the European Parliament, postponing the Brexit deadline has increased the chances that Brits will have to vote. Rejected by UKIP, the co-founder of the English Defence League has decided to challenge other politicians as an independent candidate.

British right-wing activist Tommy Robinson, known as a co-founder of the English Defence League and vocal Brexiteer, has announced his decision to run for a seat in the EU Parliament as an independent candidate.

Robinson, whose real name is Stephen Yaxley-Lennon, addressed his supporters on his campaign website, asking sympathisers to donate to fund the campaign or volunteer, slamming the establishment and the country’s politicians from both sides of the spectrum. He accused them of betraying Brexit and called on voters to fight back at the election on 23 May.

“They’re laughing at us. All of them — Theresa May, Jeremy Corbyn, the European Union bureaucrats. 17.4 million of us voted for Brexit, but they don’t care about people like us. They’ve tried to silence us, and they took away our democratic rights by betraying Brexit”, the statement on the website reads.

Apart from May and Corbyn, Robinson took aim at Nigel Farage, dubbing him “just another millionaire stockbroker who looks down at the working classes”, paying tribute to his previous achievements, however.

“And he’s terrified of talking about issues like the Islamification of Britain. He won’t fight the battle for the heart of our country — in fact he bad-mouths those who do”, he said.

Earlier, Robinson hinted that his MEP ambitions of running for the right-wing UKIP are being undermined from within the party, Metro reported. The activist was invited to advise the party on rape gangs and prison reform, which resulted in a demarche by several MEPs, including Farage, who criticised UKIP as “obsessed with Islam” and later took the lead of the Brexit Party. Eventually, Robinson was denied full UKIP membership.

Within hours after Robinson’s announcement, activists from a group called Stand Up To Racism launched a campaign to stop him from getting into the European Parliament.