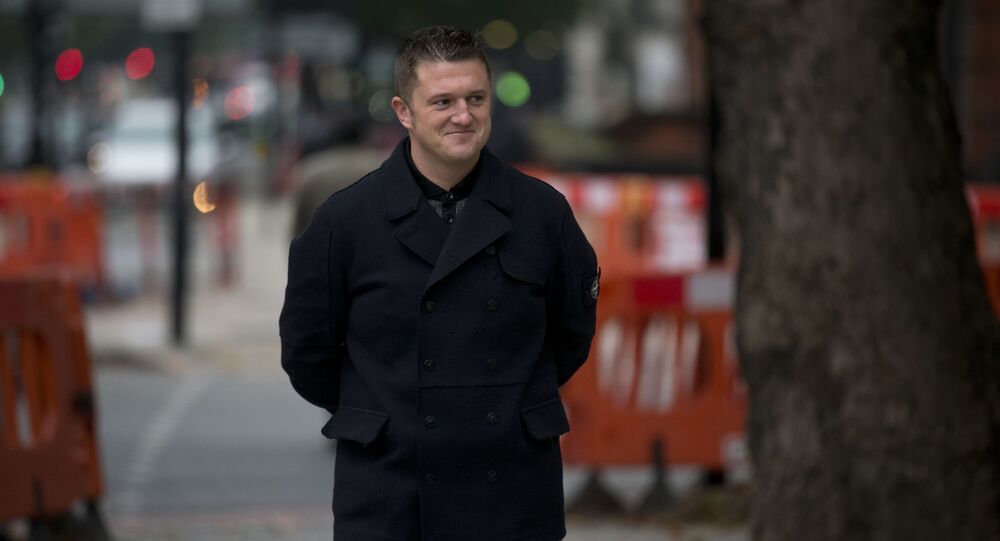 The decision could critically impact Robinson's ability to reach large audiences, given he's already banned from Twitter, leaving him with just a YouTube account — and given tech giants' tendency to act in lock-step, a ban from that platform could be impending.

English Defence League founder Tommy Robinson has been permanently banned from Facebook and Instagram for repeatedly breaking the sites' policies on hate speech, the social network has announced.

The move comes a month after Facebook issued a final written warning against Robinson, warning him if he continued to break the company's hate speech policies he would be removed from its platform permanently.

© AP Photo / David Mirzoeff
Tommy Robinson Leads UKIP March in London Amid Counter-Protests (VIDEO)
"When ideas and opinions cross the line and amount to hate speech that may create an environment of intimidation and exclusion for certain groups in society — in some cases with potentially dangerous offline implications — we take action. Our rules make clear individuals and organizations engaged in 'organized hate' are not allowed on the platform, and praise or support for these figures and groups is also banned. This is true regardless of the ideology they espouse. Tommy Robinson's Facebook Page has repeatedly broken these standards, posting material that uses dehumanizing language and calls for violence targeted at Muslims. He has also behaved in ways that violate our policies around organized hate," Facebook said in a statement.

Robinson is now in the same category as InfoWars founder Alex Jones — and users allowing him access to the site through their own pages or profiles could face disciplinary action themselves.

Facebook added: "Our public Community Standards state this sort of speech is not acceptable on Facebook — and when we become aware of it, we remove it as quickly as we can. Our rules also make clear that individuals and organizations that are engaged in "organized hate" are not allowed on the platform, and that praise or support for these figures and groups is also banned. This is true regardless of the ideology they espouse."

© AP Photo / Matt Dunham, File
Tommy Robinson Spotted at Grudge Match Between Youtube Stars KSI, Paul Logan
"For far too long the hate-spilling, anti-Islamic tirades of violent Tommy Robinson, have been given a platform on Facebook. The social media giant has even allowed this puppet of the global fascist movement to raise hundreds of thousands of pounds through its charity-giving Donate button. In December, while making the case for an independent social media regulator, I argued Mark Zuckerberg had shown contempt for both democratic accountability and social responsibility by his failure to act against the EDL founder's Facebook account. Facebook's actions have taken far too long and come far too late. The public interest demands an end to the laissez-faire approach to regulation. It is vital we create a place where reasonable debate and discussion can take place without trolls, extremists and violent racist thugs seeking to damage and undermine our society," he said.
...
Reddit
Google+
Blogger
Pinterest
StumbleUpon
Telegram
WhatsApp
1711