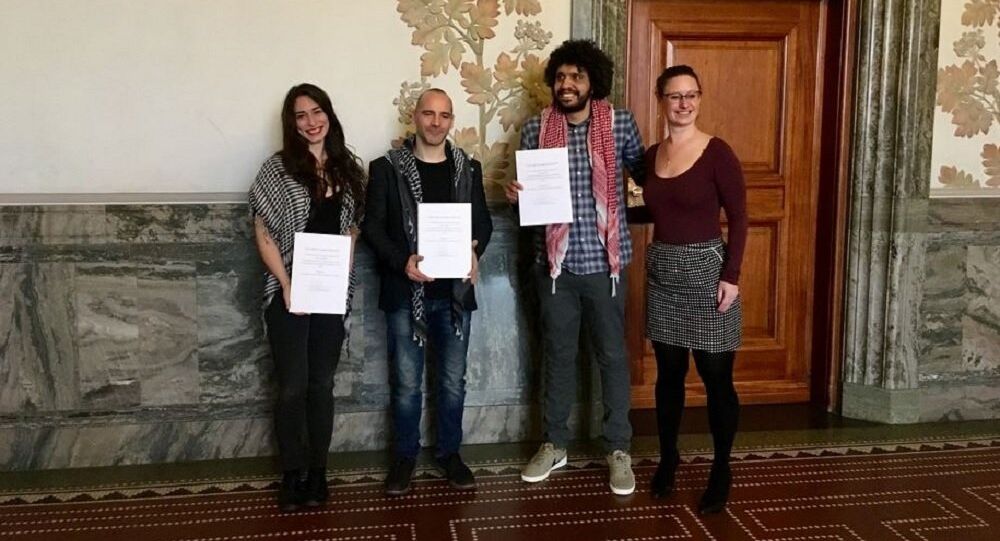 Three members of the BDS movement, which is attempting to undermine the state of Israel financially and opposes its politics, have been decorated with the Copenhagen Courage Award for "having worked tirelessly to reveal the apartheid-like nature of the Israeli regime and its systematic violation of international law".

BDS (which stands for Boycott, Divestment, Sanctions) is billed as a "Palestinian-led global movement for freedom, justice, and equality". Much of its work is to encourage boycott of Israeli goods and companies. The movement is also working against Israeli settlements it deems illegal.

Ronnie Barkan, Majed Abusalama, and Stavit Sinai received the Copenhagen Courageous Award for "having worked tirelessly to reveal the apartheid-like nature of the Israeli regime and its systematic violation of international law".

The three BDS members were reportedly charged with assault and illegal intrusion during a speech by Israeli politician Aliza Lavie at Humboldt University in Berlin on 20 June 2017 and have since been known as "the Humboldt three".

​During the ceremony, Ninna Hedeager Olsen allegedly said that "the world needs such courageous activists", stressing that it is a special honour to welcome them to the city, the newspaper reported.

"If you use the City Hall to glorify people who are charged with this sort of thing, then I must strongly disagree", Næsager said, claiming the ceremony to be illegal.

Similarly, the award aroused wonder at the Danish Zionist Association. According to its president Max Meyer, mayors should refrain from events with a clear political message.

"When a mayor honours provocateurs who demonise and boycott Israel, the Danish Zionist Confederation will strongly urge [the Lord Mayor] to distance himself from this. We believe that technology and environmental mayor Ninna Hedeager Olsen should keep her own anti-Zionist attitudes inside her party's office and not in Copenhagen City Hall", Max Meyer said.

The Copenhagen Courageous Award is a private initiative led by members of the Red-Green Alliance party. Ulrik Kohl, one of the members of its "ad hoc committee", stressed that Ninna Hedeager Olsen was invited to award the prize not as a mayor, but as a private person, yet also as an important voice in Danish politics. By his own admission, he was pleased that the occasion took place at City Hall to highlight its importance.

Kohl has been convicted of supporting terrorism though his engagement with the T-shirt company Fighters + Lovers, which financially supported the Popular Front for the Liberation of Palestine (PFLP) and the Revolutionary Armed Forces of Colombia (FARC), both classified as terrorist organisations in the European Union

"I know they are charged and waiting for a trial, and I see that as a big misunderstanding. They have used their freedom of expression to draw attention to some crimes committed in connection with the illegal occupation by Israeli authorities and the Israeli army", Ulrik Kohl said.

According to her webpage, Ninna Hedeager Olsen has long been active in International Solidarity Movement, which claims to fight "the Israeli occupation of Palestine" through non-violent actions.