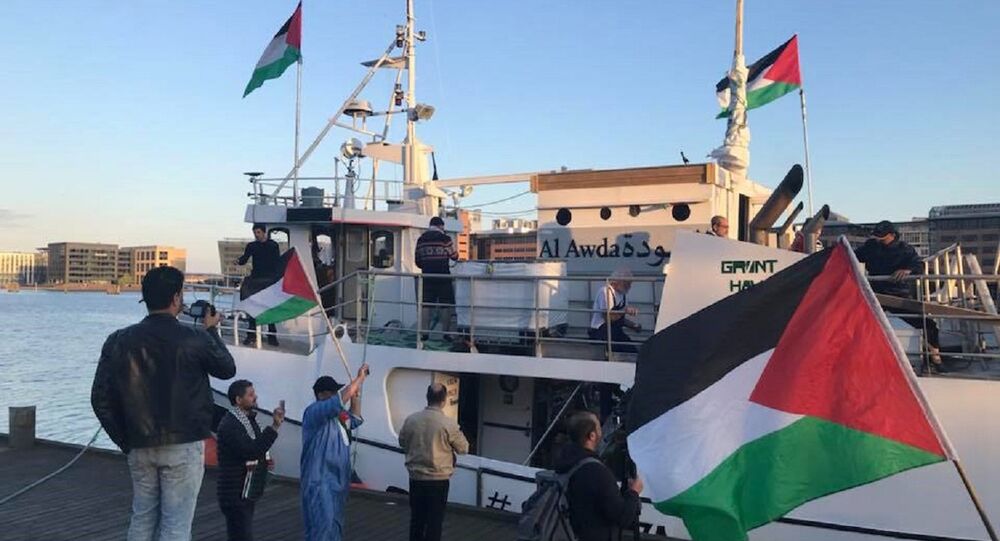 Four ships with the Freedom Flotilla Coalition (FFC) are heading to the Gaza Strip in an effort to “break the siege” of the enclave, which the United Nations has long called illegal. Three of the ships departed Copenhagen, Denmark, on Monday and are expected to be joined by a fourth en route.

The journey is expected to take more than two months, as the ships will stop at several ports in Europe to hold demonstrations in support of the Great Return March, which began March 30 and saw more than 3,500 Palestinians shot by Israeli sniper fire. Those protests ended on May 15, a known to Palestinians as "Nakba day," or "day of catastrophe," but celebrated in Israel as its independence day.

That same day, a ceremony was held in Gothenburg, Sweden, as hundreds of activists from Scandinavia and other European countries marked the launch of the flotilla.

The boats include al-Awda, or "return;" Heria, or "freedom;" and Maird, which is named after the Irish Nobel Peace Prize laureate Mairead Maguire, an advocate of the Boycott Divestment and Sanctions (BDS) campaign against Israel who took part in another Gaza flotilla back in 2010.

In 2016, Maguire was detained and then deported alongside 12 other women on a "Women's Boat to Gaza" after it was stopped off the coast.

A fourth ship, Palestine, was expected to join up with the others before they passed through Denmark, Germany and the Netherlands, but was delayed due to engine problems and will instead close ranks with the other ships in Kiel, Germany.

This year's crew consists of pro-Palestine activists from 20 different countries, including Israel.

"In response to the brutal Israeli blockade, for seven years the Freedom Flotilla Coalition has carried out nonviolent direct actions aimed at raising international awareness and putting pressure on the international community to end the blockade," a statement from the group Canada Boat to Gaza reads. "We sail this year for the right to a just future for Palestine… We will continue to put pressure on our governments and protest their complicity with Israel's crimes against humanity."

The blockade of Gaza was imposed by Israel and Egypt in 2007 after Hamas, which Israel calls a terrorist organization, won the Palestinian legislative elections. Israel has in the past violently seized control of aid ships attempting to reach Gaza. In 2010, nine activists were killed by Israeli Defense Forces as they commandeered their vessel. There have also been reports of mysterious problems occuring onboard the ships at their ports of origins in years prior, according to the Jerusalem Post.

Turkey to Provide $1.2Mln Worth of Aid to Palestinians in Gaza - Deputy PM