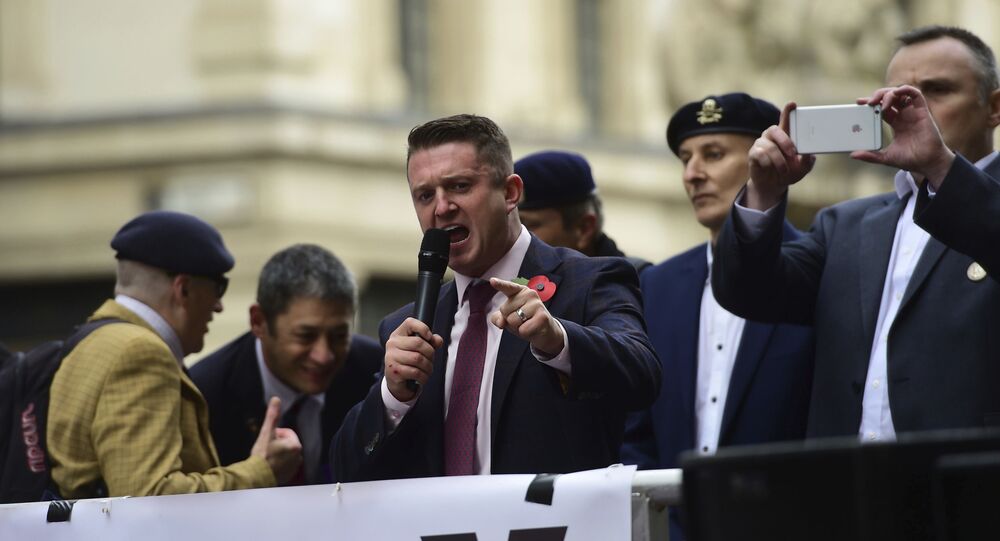 UKIP is being transformed into an "anti-Islamic party" which could soon be led by Tommy Robinson, former members and MEPs concerned about the leadership of Gerard Batten have suggested.

In all, three MEPs and several high-ranking members have resigned in just over two months over the direction the party has taken under Batten — and the apparently impending arrival of Robinson to the party could precipitate yet further exits.

© AP Photo / Matt Dunham
Tommy Robinson Attacked During Live Stream (VIDEO)
He's currently banned from becoming a fully-fledged member by party rules banning former BNP and EDL members from joining, but was appointed 'grooming gangs adviser' by Batten in November — and has bidden his supporters to join UKIP in order to influence its internal policies. The party's national executive committee delayed a vote on Robinson's membership until after the UK's putative EU secession date in March.

Batten nonetheless appeared at several 'Free Tommy' protests — including an event at which he dubbed the prophet Muhammad a "paedophile" — after Robinson was jailed for contempt of court earlier this year.

Despite the evidently fractious controversy surrounding his party management, on December 2 Batten survived a no confidence vote launched by supporters of former chief Nigel Farage — the result led to the resignation of Suzanne Evans, former party deputy chair.

She said she was increasingly alarmed by the "perverse direction" Batten was dragging UKIP, and saw the vote as the party's last hope, accusing the party's NEC and MEPs of ignoring "obvious attempts by Gerard and Robinson to orchestrate a Momentum-style takeover".

"I'd never have joined Ukip as it stands today, obsessed as it is with becoming a successor to the British National Party and the English Defence League, and putting an increasingly hostile and vicious focus on attacking the Muslim community en masse," she said.

Bill Etheridge MEP, who quit the party October 2, told The Independent he feared Batten was merely a 'placeholder' for Robinson.

"The fact Robinson has been taken on as an adviser without even being a member would suggest he is going to have a senior role. I think Batten might be keeping the seat warm. By calling people to rally round his very strong and extreme views on certain matters, he will have a strong membership, but he'll also frighten off the general public who might've been inclined towards Ukip in the past. UKIP should be on at least 15 percent in the opinion polls and it's not, because his views are making the party so marginal that normal voters just don't want to touch it," he said.

© AFP 2021 / Daniel Leal-Olivas
No Apologies: New Manifesto Policy Will Reclaim Borders, Curb Immigration - UKIP
At the UKIP conference in September, an "interim manifesto" was presented, which included proposals to create Muslim-only prisons and repeal hate crime laws — Etheridge, now a member of the Libertarian Party, said the manifesto wasn't discussed with party representatives or members and shocked many supporters.

Nonetheless, he acknowledged Batten had saved UKIP from financial ruin — even if temporarily — and membership had increased significantly under his tenure. Still, such apparent successes weren't sufficient for the defector.

Other figures to quit the party over Batten's leadership include Patrick O'Flynn MEP, who specifically cited the arrival of Robinson to the UKIP scene as his reason for quitting, and hereditary peer William Dartmouth MEP, who left in September.

Tories Won't Dump May, 'Only Care About Own Skins' - UKIP Leader Tells Sputnik