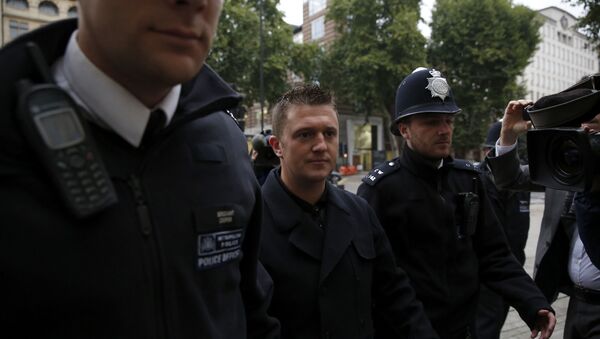 Back in 2011, Tommy Robinson, co-founder of the right-wing street protest movement, the English Defence League, was convicted of leading a street brawl with 100 football fans in the town of Luton.

Tommy Robinson, a right-wing activist and co-founder of the English Defence League (EDL) was on his way to watch Luton Town vs Plymouth Argyle football match when he was assaulted while livestreaming a video to Facebook.

In the video, which has since been deleted from his page, Robinson is seen walking down a road and lamenting that banners against the Football Lads Alliance were politicising sports.

He is then heard arguing with passersby off camera before eventually being confronted by several men, with the live stream being interrupted. When the broadcast resumes, the camera is no longer filming his face, and a voice can be heard yelling ‘where’s the f***ing bodyguard’.

READ MORE: Dinner With 'Deplorable' Tommy Robinson While on Tour to Cost Aussies A$995

Shortly after the skirmish broke out, a group Football Lads & Lasses Against Fascism tweeted about the incident, having attached the video:

Stephen Yaxley-Lennon aka Tommy Robinson turned up at Luton Town today for a Luton firm get together. He arrived with a team of bouncers. He was confronted and told he's not welcome by #LUTONFLAF

Remember this is his… https://t.co/z6ynMdmyU5

A number of British media outlets later reported that Robinson insisted that he’d never had bodyguards:

“My point is that I have never brought the EDL’s politics to Luton Town Football Club. What I was saying to them was keep your politics out of football. I was in town with my friends, eight of whom were black. Just because they’re black people say they’re bodyguards. I’ve never had bodyguards".

Social media users are divided on the matter, with many seemingly approving of the assault:

I am seriously disappointed in whoever did this to him. Where’s the slow-motion footage of the critical moment? They’ll just have to do it again and again until the video looks good.

Hope he got proper battered.

…while others jumped to his defence, saying that such attacks were inadmissible regardless of the individual’s ‘political affiliation’:

Assaults in the street are unacceptable. No matter what someone's political affiliation is.

Robinson was previously found guilty of “using threatening, abusive or insulting behaviour” after he led Luton Town fans as they clashed with Newton Country supporters in 2011. The EDL-founder denied the charges, but was convicted after a trial, and given a 12-month community rehabilitation order and a three-year ban from football by Luton magistrates.