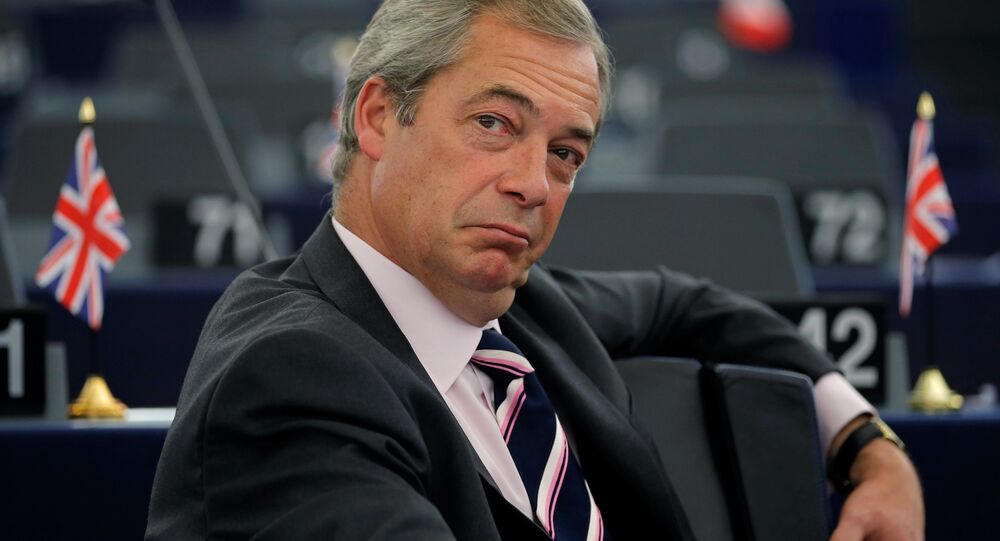 Nigel Farage has remained a staunch Brexiteer and Eurosceptic despite standing down as leader of the UK Independence Party (UKIP) after Britain voted to leave the EU in 2016.

UKIP’s most successful leader warned on Tuesday he’ll have “no choice” but to return to frontline British politics if the government doesn’t cease its efforts to betray Brexit.

Farage issued the warning in an article published in The Telegraph, in which he applauded Boris Johnson and David Davis for resigning from UK Prime Minister Theresa May’s cabinet over their contrasting approaches to Brexit.

“My own red line is that if Article 50 is suspended or delayed, I will have no choice but to resume campaigning in all parts of the United Kingdom. In March 2019, the current leader of UKIP, Gerard Batten, will reach the end of his term in office. Unless Brexit is back on track by then, I will have to seriously consider putting my name forward to return as Ukip leader,” Farage wrote.

“I never thought I would say that again, but the government’s sell-out leaves me with no choice. The latest Brexit betrayal must be reversed.”

Furthermore, the ex-UKIP leader revealed he never had political ambitions, but had to do something about the UK’s membership of the EU, which he considered to be having a detrimental effect on Brits and pushed him to join UKIP.

He also launched a direct attack against PM May, insisting she had “promised a lot and delivered very little,” and said she was “probably the worst home secretary in living memory.”

© AFP 2021 / CHRIS J RATCLIFFE
Brexit Transition Deal is 'Total Betrayal' by UK Government - Deputy UKIP Leader
If Farage did return as UKIP’s leader, it would be the third time he has done so. After resigning from the leadership in the aftermath of successful Brexit referendum in mid-2016, Farage continued to serve as an MEP, and shrugged off numerous calls for him to return as leader.

Support for UKIP has nosedived in recent years, in both parliamentary and council elections, in part due to Farage’s absence, but mainly because the party is considered to be no longer relevant, as Brexit – the party’s ultimate goal – was already in motion.

However, as PM May is seemingly attempting to “betray” Brexit by potentially delaying Article 50 or keeping the UK in the EU single market and customs union, a UKIP revival could be on the cards.