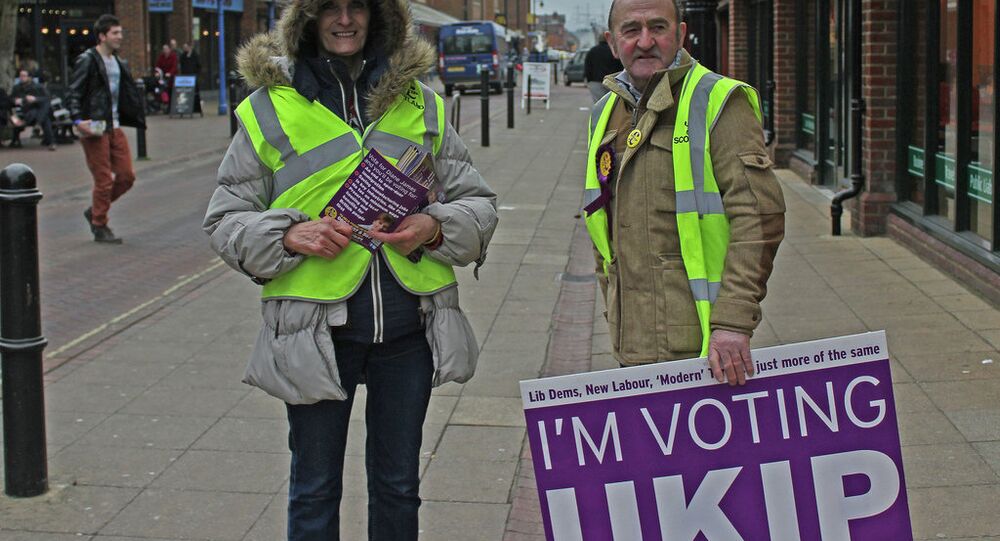 An upcoming by-election in the London constituency of Lewisham East will see candidates compete to win over voters and claim the seat for their party. David Kurten, who is a member of the London Assembly for the UK Independence Party (UKIP), spoke to Sputnik about the June 14 by-election and outlined his policies.

© REUTERS / Dylan Martinez
Labour Voters 'May Abandon Party' at the Next UK Election Because of Brexit
Triggered by the resignation of Heidi Alexander, it will be only the second by-election since last year’s general election, providing UKIP with an opportunity to regain a presence in the House of Commons.

Meanwhile, the Tories are hoping to gain this seat to strengthen their minority government, but polling currently lists Labour’s candidate as favorite to win the seat.

Discussing his proposals for the constituency and his party’s national policies with Sputnik reporter Suliman Mulhem, David Kurten said serving as a member of the London Assembly for two years has given him a good understanding of local issues.

Unsurprisingly, Brexit remains a key matter of interest for Britain’s most Eurosceptic party, and Mr. Kurten insisted that UKIP is the only party which “stands for a true Brexit,” and said the UK should entirely leave the EU customs union and single market.

“Brexit is the number one priority for the nation. The people of the United Kingdom voted for a full Brexit in the referendum. Theresa May wants to keep us in a ‘customs partnership’ without end, which will keep us entangled in EU red tape and regulations for years to come and unable to enjoy the freedom and prosperity which Brexit will bring,” he said.

© AP Photo / Matt Dunham
Business Leaders Ask May for Clarity on UK-EU Trade Relations After Brexit
He also noted that the Labour Party’s candidate for Lewisham East wants to keep the UK locked in the customs union and the single market, which he described as “a betrayal of the British people” and urged the electorate to “vote UKIP to reject Tory/Labour fake Brexit.”

With regard to the challenges of leaving the EU, Mr. Kurten said the UK’s education system needs to be adapted to tackle skill shortages.

“As we leave the EU, we need to become self-sufficient in skills. Different children have different aptitudes, interests and talents, and thrive in different settings. UKIP wants grammar and technical schools in every borough and district so that no child is held back. For children who prefer technical or vocational leaning, we would allow them to start a Level 1 Apprenticeship from age 14.”

He proceeded to call for bursaries for nursing and midwifery students to be “re-introduced with urgency” and said UKIP would pay off the tuition fees of graduates who studied STEM degrees if they go on to work in a related field in the UK.

The growing issue of violent crime in major cities throughout Britain, especially London, has pushed the matter of policing and law enforcement back into the limelight, with vicious attacks regularly making headlines.

© Photo : Metropolitan Police
Met Police Deploy New Tactics to Fight Surge in London Moped Crime
Experts, politicians and ex-police chiefs have attributed this worrying trend to austerity measures and budget cuts to police forces by the conservatives. The Tory government has dismissed these claims and has made no indication it plans to reverse these budget cuts anytime soon.

Mr. Kurten said his party would immediately overturn these cuts in the interest of public safety, putting some 20,000 police officers back on the streets.

“On the doorsteps, people are very worried about the surge in violent crime which has made London more dangerous than New York for the first time ever. UKIP are the only party which will end Tory/Labour politically correct policing. Theresa May and Sadiq Khan both wanted a reduction in stop-and-search, which is an effective tool to tackle violent crime,” Mr. Kurten said.

He also warned that a “huge amount” of police time is being wasted on “trivial” incidents, such as apparent hate crimes, claiming that such incidents are being prioritized over more serious crimes.

“UKIP would increase targeted stop and search to tackle violent knife and gun crime, and we want police to be focused on dealing with real crime, not hurt feelings on the internet.”

Property shortages and exorbitant prices throughout the capital have made home ownership nothing more than a dream for most Londoners, and although the Tory government is rolling out plans to build “affordable accommodation,” UKIP believes the issue also needs to be addressed by controlling and reducing demand.

Specifically, UKIP plans to achieve this by stemming the “uncontrolled” flow of migrants into the UK.

“The housing crisis will never be solved unless there is an end to Tory/Labour mass, rapid, uncontrolled immigration. London’s population has gone up by at least two million in the last 20 years, entirely due to people moving into London from abroad. This has caused overcrowding and forced up house prices out of the reach of ordinary working people,” Mr. Kurten concluded.

The views and opinions expressed by David Kurten are those of the speaker and do not necessarily reflect Sputnik's position.