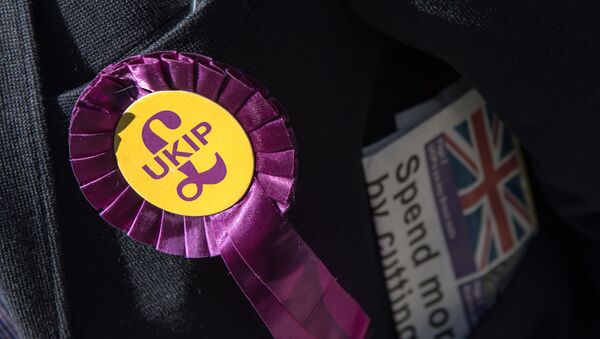 © AFP 2021 / CHRIS J RATCLIFFE
Subscribe
Negotiations between the UK and EU yielded a major breakthrough in Brussels yesterday, with negotiators agreeing on a Brexit transition deal, though some matters, such as the Irish border, are yet to be resolved.

The deal, which was presented to reporters by EU Chief Negotiator Michel Barnier, has been described as a "total betrayal" to UK fishermen by the deputy leader of the Eurosceptic UK Independence Party, Mike Hookem.

"Keeping UK fishers tied to EU for another two years will kill the fishing industry. For fishermen there will be no Brexit, as the Tories have handed the EU even more power over their industry," Deputy UKIP Leader and Member of the European Parliament (MEP) Mike Hookem was quoted as saying by an official party press release.

The draft deal stipulates that the UK's transition trading period with the EU will end on December 31, 2020, and, during this period, Britain's fishing industry will be regulated by the EU.

Mr. Hookem called on fisherman to unite and protest against this "betrayal."

"The simple fact is, the Tories betrayed the fishing industry on the way into the EU, and totally shafted the same sector on the way out," Mr. Hookem added.

Meanwhile, leader of the Scottish Conservatives Ruth Davidson also criticized the EU's regulation over the UK's fishing industry throughout the transition period.

"Having spoken to fishing leaders today, I know they are deeply frustrated with this outcome. There is no ignoring the fact that this falls short of what they had hoped for in the short-term," Ruth Davidson said in a statement.

Ruth Davidson has reacted to today’s agreement on the UK’s withdrawal from the EU:https://t.co/mf8f0ythSh pic.twitter.com/ZI7JNlLYKm

Other UK politicians were even more critical of the deal reached yesterday, with Tory MP Jacob Rees-Mogg warning that UK negotiators gave too many concessions.

"I think this transition agreement is a very unsatisfactory agreement — not just on fish. This agreement gives away almost everything and it's very hard to see what the government has got in return," Mr. Rees-Mogg told British media.

Other matters agreed in the recently announced Brexit transition deal include the UK's financial settlement to the EU and the rights of expatriates.

The UK voted to leave the EU via a referendum held in mid-2016, with just over half of voters voting in favor of Britain's exit from the union.

READ MORE: Brexit Report Warns UK Gov't Not to Get Bogged Down on Immigration

The transition period will allow businesses to familiarize themselves with the new regulations and trading conditions, and make any necessary preparations ahead of the UK's complete withdrawal from the economic union at the end of 2020.