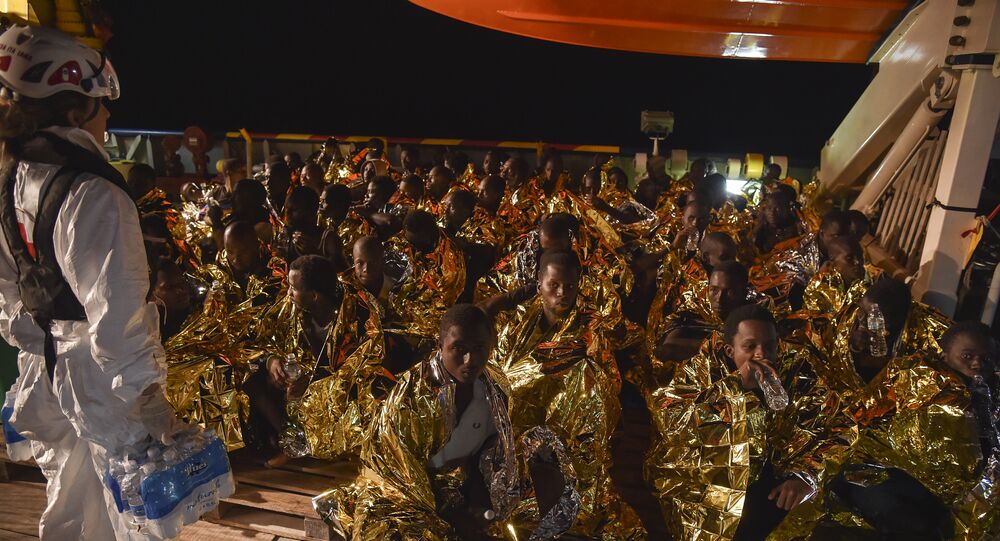 Lega party leader Matteo Salvini, who recently took the post of the Italian Interior Minister and Deputy Prime Minister, has challenged NATO’s long-term defense priorities, saying one of its members, Italy, is under attack, but “not from the east.”

Italy’s new Deputy Prime Minister and Interior Minister, who leads the second largest party in the Italian Parliament, Lega, has called for a tougher NATO stance on the problem of illegal migration after meeting two bus drivers in the northern Italy, who were reportedly attacked by four asylum-seekers this week who'd attempted to check their tickets.

“I am in favor of NATO, but we are under attack. We will ask NATO to defend us. There are many concerns about terrorist infiltrations,” Salvini said.
He also reprimanded the alliance for neglecting the acute challenge, hinting at the organization’s priorities.

“Italy is under attack from the south, not from the east,” the Italian official stated.

Although Salvini hasn’t elaborated on how he’s going to pursue his plea, his recent announcement came days before the planned visit of NATO’s Secretary General Jens Stoltenberg to Rome. Salvini has also taken aim at the charity and human rights activists’ boats working in the central Mediterranean, which provide assistance at sea to many of the thousands of asylum-seekers heading from Africa to Europe.

According to him, some of these groups were treating it as a business, “acting like taxis,” and has promised tighter control over them.

“We are working on this NGO front. Some are doing volunteer work, others are doing business,” he said.

He also reprimanded Malta, an island state and fellow EU member situated on the migration route, for not doing enough to tackle the problem of illegal immigration and saving those whose boats capsize at sea. According to the official, most of the job is left to Italy, and this has to end.

“It is not possible for Malta to say ‘no’ to every request for help. The Good Lord put Malta closer to Africa than Sicily,” Salvini said.

Italy, like Greece, has been one of the major gateways for migrants fleeing to Europe from impoverished African nations and the Middle East. Since 2015, over two million migrants — mainly from Syria, Iraq, Afghanistan, and a number of African countries have entered Europe. Over the past 5 years more than 600,000 of them have reached Italian coasts by boat from Africa. Most migrants initially arrived in Italy in poorly maintained smuggler vessels, which often sink at sea, then proceed to more generous EU states, such as Germany and Sweden, through other European countries.

However, the number of newcomers has dropped by 85% from 2017, as only 7,000 migrants have reached the European shores this year, after Italy struck a deal with Libya, which remains of the most popular starting point for illegal asylum seekers. According to the memorandum, signed more than a year ago, Italy agreed to equip and train Libyan coast guards as well as repatriate illegal migrants using European funds. The move has been praised by European leaders and has already helped to establish a sea blockade and better control over the Libyan seaports migrants use on their way to European shores.

However, human rights groups insist that due to the new policy, Italy is giving up its international responsibility to provide for the asylum-seekers' safety. This recently culminated in Italy being sued in the European Court of Human Rights. Backed by a humanitarian organization, Nigerians, who'd attempt to enter Europe unlawfully across the Mediterranean, claim Rome is responsible for the torture, slavery and abuses they face after being returned to Africa.